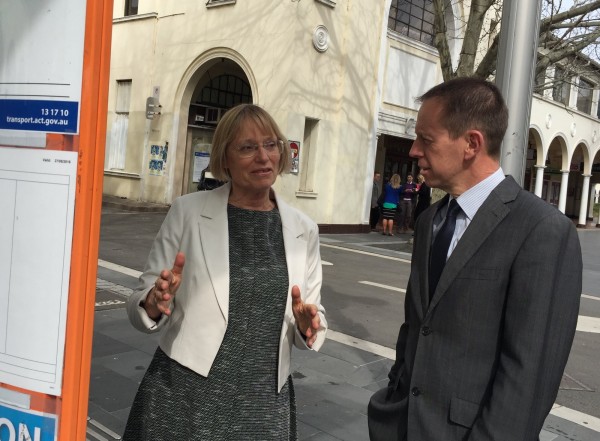 The ACT Greens would spend $57 million to improve bus frequency and coverage across Canberra and to schools in particular with a transport policy that integrates bus services with light rail.

They would increase flexible bus services, too, with a $1.5 million boost.

The major component of the funding would integrate bus routes with Stage 1 of the planned light rail network, with the aim of ensuring fast and convenient interchanging at Gungahlin, Dickson and Civic.

ACT Greens Leader and transport spokesperson Shane Rattenbury, who is a candidate in the seat of Kurrajong, and ex-MLA Caroline Le Couteur, who is running for the seat of Murrumbidgee, announced the plan this morning.

Along with Ginninderra candidate Indra Esguerra, the pair have the potential to hold the balance of power if elected, which would mean policies such as the one announced this morning could form part of a parliamentary agreement with Labor.

The Greens have publicly ruled out working with the Liberals because of the Jeremy Hanson-led party’s pledge to rip up the light rail contracts.

The obvious difference between the Greens’ bus policy and the Liberals’ own plan to expand Canberra’s bus network is the fact that the Opposition’s transport plan contains no reference to light rail.

Mr Rattenbury said the Greens supported Labor’s bus expansion plan but that the Greens’ proposal built on that policy.

“The guts of the policy is one that was signed off in cabinet, so we commit to supporting that as well,” the ACT Government Minister said.

“So that’s the increased number of rapid services, but I think the thing we really want to focus on, and probably the key difference, is the increase in schools services, and also looking at frequency, because one of the drivers of people wanting to use the bus is not having to wait an hour for it, knowing that if they just missed one, it’s not too long to haved to wait for the next one.”

Mr Rattenbury said the Greens would have a further announcement about weekend public transport services in coming days.

In her capacity as the Greens’ seniors spokesperson, Caroline Le Couteur said her party would make sure no one was left behind as the city grew.

“We are boosting the flexible bus service by $1.5 million to ensure that Canberrans with disabilities, or who are older and less mobile, can get around easily and participate fully in our community,” Ms Le Couture said.

“Every Canberran should be able to quickly, conveniently and affordably get around our city, and having a disability or being an older person should not be a barrier to getting good public transport.

“The ACT Greens have already committed to extending light rail to Woden and beyond, and I am pleased to announce this additional funding to ensure that our bus and light rail networks are truly integrated.”

The Greens have previously announced that they would freeze public transport fares, which they say could save those who catch buses during the working week between $160 and $315 per traveller a year.

From the OP : “Along with Ginninderra candidate Indra Esguerra, the pair have the potential to hold the balance of power if elected, which would mean policies such as the one announced this morning could form part of a parliamentary agreement with Labor.”

If the Green(s) are elected and become a member of a minority ACT Labor Govt (so creating a majority for voting in the LA), how is that “holding the balance of power” ? They would be in the Labor Govt – as they are now. They are as one.

I assume they are swapping preferences with Labor?

From the OP : “Along with Ginninderra candidate Indra Esguerra, the pair have the potential to hold the balance of power if elected, which would mean policies such as the one announced this morning could form part of a parliamentary agreement with Labor.”

If the Green(s) are elected and become a member of a minority ACT Labor Govt (so creating a majority for voting in the LA), how is that “holding the balance of power” ? They would be in the Labor Govt – as they are now. They are as one.

So, what’s the point?

While Canberra is not a big city, it is relatively spread out so there is a common assumption that everyone...
News 70

Greens call for upgrades to exposed and congested Civic interchange

@The_RiotACT @The_RiotACT
Canberra’s most pup-posterous & dog-centric event of the year is returning on 24 April, with BarkFest 2.0 promising a paw-fect doggie day out https://t.co/4lkhjEFvJW (13 hours ago)