Groovin the Moo returns to Canberra

One of Australia’s most popular regional music festivals Groovin the Moo will return to The Meadows at University of Canberra this Sunday 27th April.

Now in its 10th year, the all-ages festival is boasting a big name line-up including Dizzee Rascal, The Jezabels, Karnivool, Architecture in Helsinki, The Presets, Disclosure and many more.

Canberra’s own electronic music duo Peking Duk will also make an appearance behind the decks at 6.00pm on the Moolin Rouge stage.

The afternoon will be hosted by Triple J radio presenter and Frenzal Rhomb guitarist Lindsay ‘The Doctor’ McDougall. 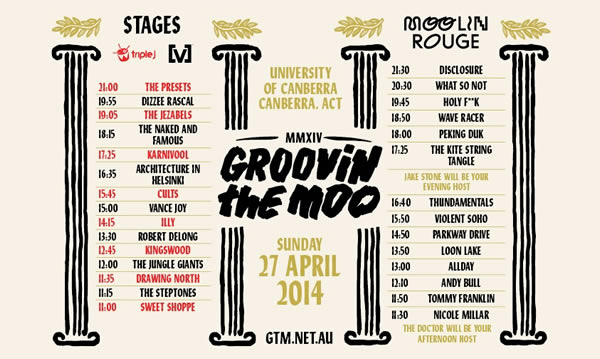 franky22 - 8 hours ago
Of course if you catch the burglar & clobber them with a cricket bat the wallopers will be around to arrest you in record tim... View
kenbehrens - 10 hours ago
A couple of our neighbours have been burgled and the police went and chatted to the other neighbours to see if they might hav... View
Liza Jensen - 11 hours ago
Seriously? If there wasn’t already zero police presence in the Molongolo Valley area, now we have to also report our own cr... View
Opinion 20