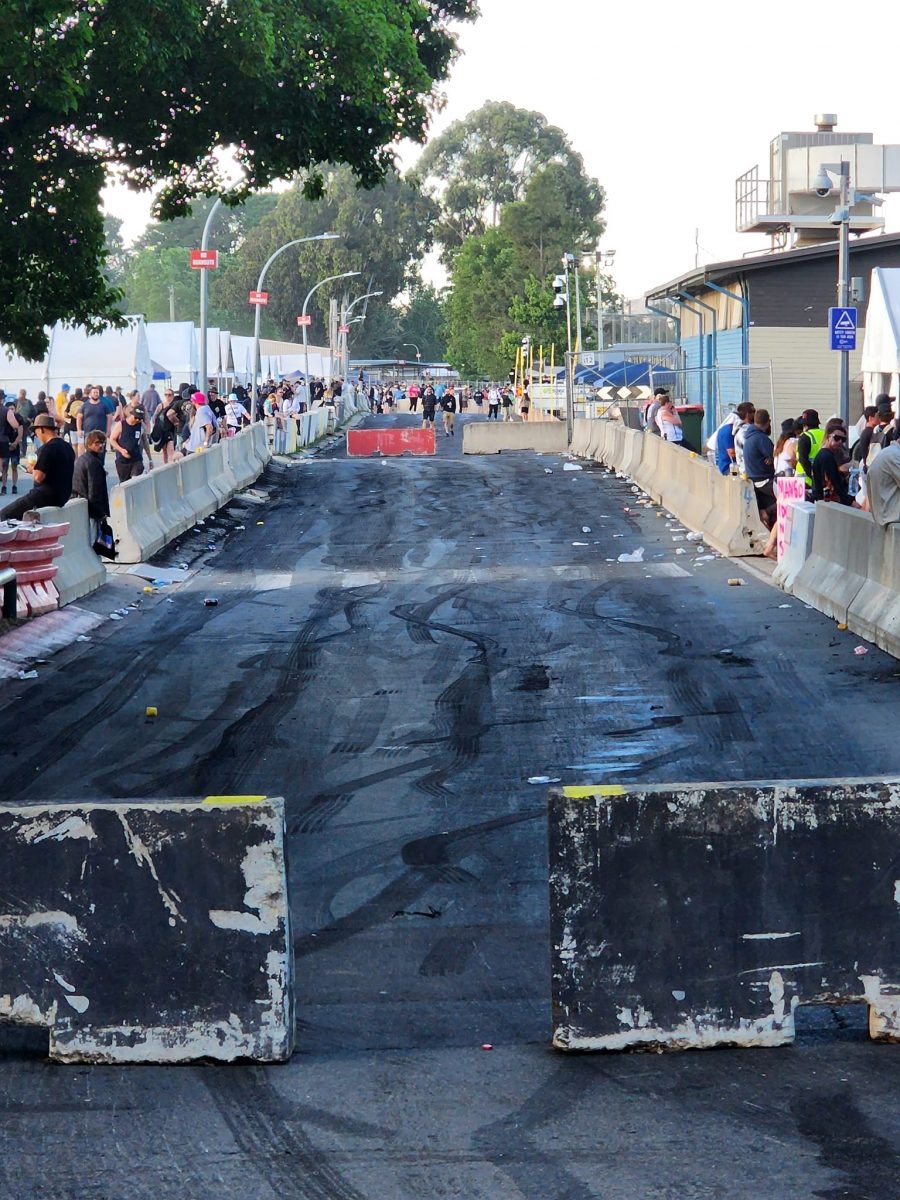 This circuit was closed at 6 pm on Saturday after it became too dangerous to continue cruising in the venue. Photo: Summernats.

An out-for-blood police union has slammed the organisers of Summernats after “antisocial” behaviour led to the early closure of the track and dispersed spectators and drivers across the community.

The Australian Federal Police Association (AFPA) yesterday (9 January) issued a scathing critique of the decision to stop cruising within the venue, saying this put police and the community and risk as crowds dispersed around the Territory to gather elsewhere.

On Saturday (7 January), the cruising circuit at EPIC was shut at around 6 pm due to dangerous behaviour, including drivers refusing to listen to the directions of security staff and some spectators entering the track.

Some reports have surfaced of drivers deliberately bringing their vehicles into contact with each other, but these are unconfirmed.

ACT Policing said this led to increased poor behaviour as festival attendees – both spectators and drivers – stopped complying with directions from security staff.

Officers were called in to disperse the crowd and some privately contracted security guards left the venue, which police said resulted in an “understrength security presence”.

They also said the decision to close the circuit early led to crowds gathering in areas like Braddon, Fyshwick, Majura Park and Hume.

Police were also critical of Summernats organisers for a perceived lack of adequate crowd control.

“Events of this nature require an appropriate security response, and ACT Policing is disappointed that organisers were not able to maintain good order inside EPIC,” a spokesperson said.

But the union representing police officers – the AFPA – has gone further, accusing the Summernats organisers of “gross negligence” and placing the community and officers at significant risk.

AFPA President Alex Caruana said poor security-related decisions needed to be addressed before planning future events, with a repeat of Summernats 35 being untenable.

“The organisers need to do much better when it comes to security and stop pushing their problems and poor management onto ACT Policing and the community,” Mr Caruana said.

“ACT Policing resources had to be pulled from other frontline activities to assist on the ground in managing people displaced by the actions of Summernats organisers.

Mr Caruana urged the government to commit to an independent audit of the security arrangements behind Summernats 35 and seek reassurances and commitments from the organisers for future events that this won’t reoccur.

“Gross negligence has resulted in ACT Policing being left to clean up the mess of others,” he said.

“The organisers’ solution to de-escalate the situation and stop the event was to simply push the problem onto ACT Policing and the wider community.

“While managing the issues created by a number of Summernats participants and organisers, ACT Policing members also had to maintain their presence across the Territory doing the job they are paid to do. It’s only by dumb luck that a life-or-death incident didn’t occur during this time; police resources would have been significantly delayed due to the problems selfishly caused by Summernats participants and organisers.” 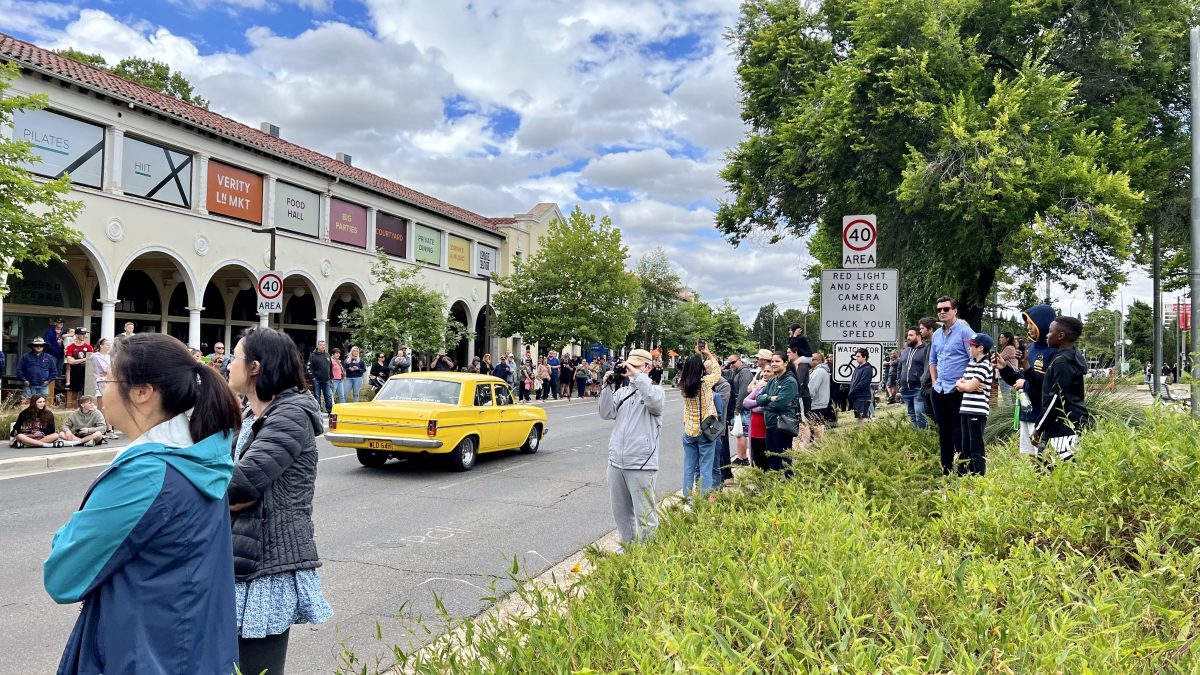 Summernats kicked off with a cruise along Northbourne Avenue. Photo: James Coleman.

Mr Lopez has stressed the vast majority of festival attendees were doing the right thing and he was concerned by the few who had attended solely to cause disruptions.

He said learnings about crowd control would inform next year’s festival plans.

The ACT Government was asked whether it would review the security arrangements for Summernats.

In a statement, a spokesperson said the antisocial behaviour reported on Saturday was disappointing.

“Safety and security arrangements for the event are reviewed with Summernats organisers every year.”

The argument that it was “only a small minority” is meaningless. Duh! Whenever there has been problems in the past, it has always only been caused by a small minority. The majority have always been reasonably well behaved and there to enjoy the cars – but that doesn’t diminish the harm caused by that small minority. I used to live in the nearest street to the venue (Cooper Place) and I used to get people using my front yard as a toilet. I never thought everyone did that, but that was small consolation when I was cleaning up human excrement. My suggestion is to make the whole event dry – no alcohol under any circumstances. Celebrate the cars. You don’t need booze to do that.

How about the organisers keep a bond (money) for each car entering.
From the bond if a entered vehicle misbehaves in EPIC or in the suburbs the bond is collected from the entrant.
Should be at least a few thousand dollars bond & this can be returned after a week in case information comes in from the community that a vehicle with registration number ….. was filmed doing burnouts in suburbs.
Also ACT policing could post infringements by post to those doing unsafe driving on the streets of Canberra.
Just have a couple of ACT policing administrators review emails with footage of such vehicles.
Good way to control what can’t be supposedly controlled

Frank Calipari Sounds like one way to try to get the attendees under control, although it seems that a lot of the bad behaviour is from people who don’t enter cars. They’re just spectators until they get outside the gates, and then they decide to have a go on our streets. Essentially, Summernats NPCs.

Two things really need to happen at summernats. Firstly alcohol needs to be banned. Of course this is not really feasible so entrants and spectators should be issued drink vouchers 3 per person per day should be enough. After that you cannot puchase more alcohol. As it’s a licenced venue entry can be legally refused to those that would choose to leave the grounds and return with a skin full.

Secondly entrants need to sign a document stating that they understand and accept that any means will be employed to stop them from driving dangerously. These means will likely cause significant damage to their vehicle.

A fire extinguisher pointed at the air intake of their engine to shut down their burnout. A forklift to lift and carry their car out of the venue.

Having said that I was told that the residents of Braddon appartment blocks were egging cars at the fringe festival. This means that some of the bad behaviour was anti Summernats people if there was any truth to that story.

If Braddon hipsters were the ones chucking the eggs they would have been Huevos cabreados (angry eggs).

In other words, both the Summernats organisers and ACT Policing were once again unprepared to deal with the completely predictable and regularly scheduled increases in anti-social behaviours and dangerous and illegal driving encouraged by the annual return of Summernats.

Christine Stevens
Why did you forget to mention the ACT Government licensing inspectors failure to attend and put notices on stall holders selling alcohol or the event organisers?

The sole purpose of security is/ was to maintain and manage the crowds. It’s not the cops job. They are there as last resort.

Leos Nikias No arguments from me on the failures of the licensing inspectors. As they do with the local licensed venues, too. Far too many of them have business models that mean they won’t make a profit if they don’t break the law. It’s disgraceful that they do it, and it’s disgraceful that the government deliberately allows them to get away with it.

Christine Stevens
I’d like to know how many security guards that actually worked against “how many” were on the books “working”.

Leos Nikias No doubt a bit of that going on, too. I’ve read some completely unconfirmed comments from people who were there saying that at various times security workers would change shirts and join in with the crowds’ misbehaviour. But when Andy Lopez made the call to shut down the cruise circuit and things really got out of control, the security guards were told to withdraw for their own safety. That’s on the record, and that lands fully at the feet of Andy Lopez and his (mis)management team.

Burn out bogans affecting plenty suburbs in the lead up to, and aftermath of this income generator.

Pity those whose houses are next to the favoured playgrounds of the selfish.

I’m a fan of the drive-thru display of amazing cars, but happy to crush every car of muppets out trashing suburbs.

Summernats has been around for 35 years. I don’t buy the residential argument anymore. U know what u r getting when u buy there now.

I hope this also includes dealing with those attendees who dispersed to suburbs around Canberra performing burnouts on community streets at all hours of the night during the course of the event.

Its most likely the idiots not the entrants who have a car they love.

By 7pm Saturday, they’d established a flaming burnout in our mild suburb, with delighted spectators drinking from deckchairs, abusing passers-by. Mr Barr, I’d rather pay higher rates than have the purported dollars of these “tourists”.

Yes Stephen, it is all about the money. A business event supported, by default, by the ACT Government. To Mr Lopez’s credit he recognises the risks and tries to mitigate them however there are still a few idiots getting out of control. Unfortunately some car events attract bogans who when in someone else’s backyard are let off the leash and everyone says, ‘didn’t see that coming’. The AFP are right, it is going to take a fatality like someone losing it and running a vehicle into a crowd while doing a burnout before anyone takes any action. Then watch the organiser and the Local Council run for cover.

Mr Barr will hit u with higher rates regardless of Summernats being here or not.