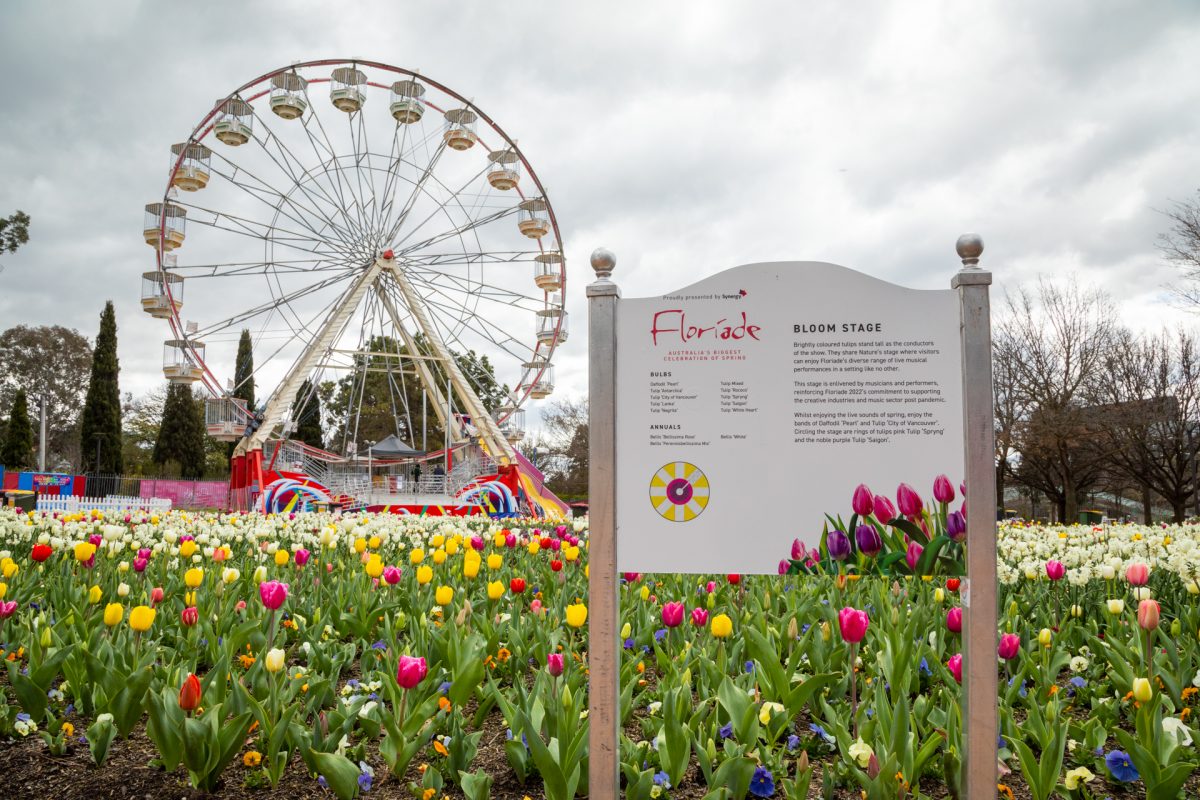 Floriade and other big events are wearing out Commonwealth Park. Photo: Michelle Kroll.

The wear and tear on the national capital’s feature city park are taking their toll and a major facelift and redesign are planned so Commonwealth Park can continue to host events, provide the recreation and respite it was intended to do and live up to its full potential.

The National Capital Authority is seeking a consultant in the 60th anniversary of the gazettal of the name ‘Commonwealth Park’ to review the park’s current state and provide a new vision for what it could become.

The NCA wants a new design framework to guide future development and a new concept plan for how big events such as Floriade should be staged.

It says the 34-hectare park by Lake Burley Griffin, originally intended to be a place of recreation and showpiece of national horticultural excellence, had become a major events venue over the years, particularly for the ACT’s biggest tourism moneyspinner, Floriade.

This has left the park looking noticeably tired and exposed the current design flaws for this type of role, including poor pedestrian connectivity, deteriorated trees, poor wayfinding, and outdated infrastructure and amenity.

“It is an opportune time to assess the issues facing the park and reimagine it so it is an inviting civic place for the next 60 years,” the tender says.

“In developing the concept plan, the supplier will consider issues such as the historical legacy of Dame Sylvia Crowe’s master plan, the impact of major events such as Floriade, access, the role of the park as a major landscape feature and public resource in the inner city, sustainability, and park management.”

The consultant should also look at the park’s purpose, how its full potential could be realised and what is needed to put it on a more sustainable footing.

Bringing unrealised components of the 1965 Master Plan to life should also be in the mix.

The NCA wants to know what works will be needed to renew the park in line with a new design framework, including better amenities, improved settings for events and more connectivity to the site and within.

The park’s place in the Indigenous landscape as part of Ngunnawal Country is also on the table.

The impact of Floriade on the park has been the source of controversy, with the NCA forced in 2015 to deny it wanted the annual flower festival moved to another site but admitting to preferring a more dispersed event.

The ACT Government considered other locations, such as Glebe Park, but this provoked community opposition. Since then, Commonwealth Park has been confirmed as the permanent home of Floriade.

The NCA has also come under fire in previous years for not spending enough on the park’s upkeep. In 2018 it announced a $500,000, three-year revitalisation plan.

The NCA hopes to have a consultant signed up by mid-February, a draft report by mid-June and a final report by October.

The tender closes on 25 January.

Edinburgh Gardens in Fitzroy, Melbourne would provide a very good template for a revamped Commonwealth Park. The gardens cater for a wide range of active (tennis, basketball, skate, running, biking, dog walking etc), passive (parkland and gardens) and social (BBQs and a rotunda) activities. It attracts lots of people and accommodates events such as recently, a New Year Eve concert.

What Commonwealth Park really needs – and yes, this is an expensive, long-term proposition – is for Parkes Way to be buried and turned into a tunnel, which would have a whole bunch of benefits for Civic but would also mean people could enjoy Commonwealth Park as a beautiful green, open space that would be easily accessible from Civic.

A long-term dream but it’s my dream regardless!

Would probably be cheaper than 1km of tram track

It’s not just Commonwealth Park looking tired. The whole of Canberra is looking run down.

Agree. The areas around the office blocks in Woden needs serious work including getting rid of the wind tunnel effect. Also, who designed the changes on Corinna Street, needs to go back to design school. It is so visually unappealing.

Yeah, we really need more plastic to complement the cold hard city image of steel, concrete, asphalt, glass and other synthetic things! Chuck out anything natural and beautiful that is only good for human well-being, mental and physical health. After all, who cares about that????

For goodness sake can we concentrate on things that are actually necessary instead of all these stupid distractions like this one, the stadium garbage and the theatre update…. we have people in the ACT who can not get medical assistance because specialists are not taking new patients… to anyone who thinks having a pretty city whilst the citizens are dying and suffering unnecessarily… get some perspective

That’s not the job of the National Capital Authority. It is the ACT government who is supposed to be looking after residents and is failing to do so, despite having access to so much of our money via rates, GST and other taxes. It is Barr’s mob who’re not doing their job for us all. The NCA is focussed on the image of the capital, not its people.

Put some apartments and light rail through it. You could put apartments on the pool site also. Who needs open space or facilities to exercise. Rates are most important.

Most of Canberra is looking worse for wear. Grasslands unkept, roads and pathways in need of urgent repair. Abandoned cars sit idle on the side of roadways for weeks at a time being vandalised. Government needs to revisit their priorities.

The requirements for a major events location are quite different from those of a recreation space for the many thousands who will be living nearby in high rise. Much better connection with West Basin that does not require traffic lights on Commonwealth Avenue (blocking the eventual tram line) and with proposed development on Reid TAFE carpark means better bridge (s) over Parkes Way will be needed. Also need to at least maintain tree canopy cover and cool grass areas instead of increased heat islands. Many more things to consider!