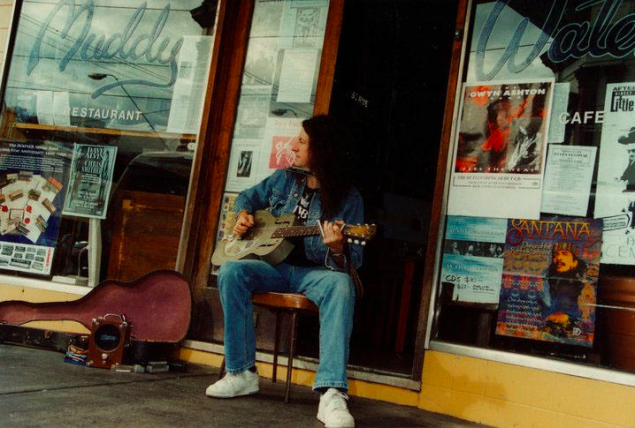 Multi-instrumentalist Gwyn Ashton is an eclectic live performer blending roots, blues, alternative and ethnic music, fusing them together with alternate-tuned electro-acoustic instruments such as Weissenborn lap slide, National resonators, 12-string and electric guitars with a kick drum, blues harp along with loopers and fuzz boxes to complete his sonic palette.

He is a master of the slide guitar and has an armoury of instruments at his fingertips to create a unique, huge-sounding one-man live show.

Ashton grew up playing the Australian circuit and re-located to the UK in 1996. He has opened for top-billing artists – Van Morrison, Status Quo, Johnny Winter, Canned Heat, Robin Trower and a multitude of other fine musicians. He has released six albums and one EP, came third place behind Jeff Beck and Gary Moore in a French guitar magazine poll, had two albums simultaneously in the Amazon Top 100. He now records, tours and plays festivals all over the world from his Euro base.

And now he’s coming to the Harmonie German Club!

Listened to an excellent interview with Gwyn on Artsound FM earlier today. A MUST see!

Nick Bennett - 58 minutes ago
Your safety is more important than social media you f-wits!!! View
Gavin Davey - 6 hours ago
I lived out there 2003 and the same thing happened the blocked off Weston Creek and not us you could hardly move on Lanyon Dr... View
Jennifer Crawford - 10 hours ago
There were crowds of people hanging around at the roundabout that the police had closed off at Tharwa Drive 😳 View
Food & Wine 5

George Abraham - 1 hour ago
The 2 before 10 at Aranda is hopeless - service is unfriendly, the coffee is burnt, the place is dirty and prices are crazy.... View
Chan McGrath - 2 hours ago
Thomas Emerson why haven’t we gone here? 💁🏼‍♀️🤷🏼‍♀️ View
Leearni Hamilton - 11 hours ago
Moey El Tahach let’s try this View
News 10

Amanda Adams - 2 hours ago
Kriso Hadskini what do you suggest as a better option? View
Samia Goudie - 5 hours ago
I can’t bare this View
Margaret Edwards - 11 hours ago
When going to and from the gym yesterday evening, Sulwood Drive was really dangerous as cars stopped to take photos and pulle... View
Opinion 3

Carmen Hinkley - 2 hours ago
www.headtohealth.gov.au is another great resource connecting you to free or low cost phone and online mental health services... View
Tim Daly - 13 hours ago
Its is a great initiative as people just need a place where they can share their story with out pressure and stress. This Is... View
Teang Pao - 14 hours ago
David Harris your awesome service is so needed right now. You're making a difference! Yeah. View
News 76

Stuart Clark - 9 hours ago
Lyle Williams thanks View
Lyle Williams - 9 hours ago
Stuart Clark An issue for LED lights in reflectors is if you turn them towards the sun, they die like ants under a magnifying... View
Jeff Favaloro - 12 hours ago
Gerda Lawrence ? That doesn’t really make sense - even the army has now changed this protocol for daytime Landing lights so... View
Sport 9

Colette Robinson - 14 hours ago
I’m amazed it had to take a catastrophe for a lot of car-dependant Canberrans to suddenly take public transport woes as ser... View
Property 4

@The_RiotACT @The_RiotACT
Do you think we need more trees in the nation's capital? Canberra’s Living Infrastructure Plan is now out for consultation https://t.co/UepRusytxI (1 hour ago)