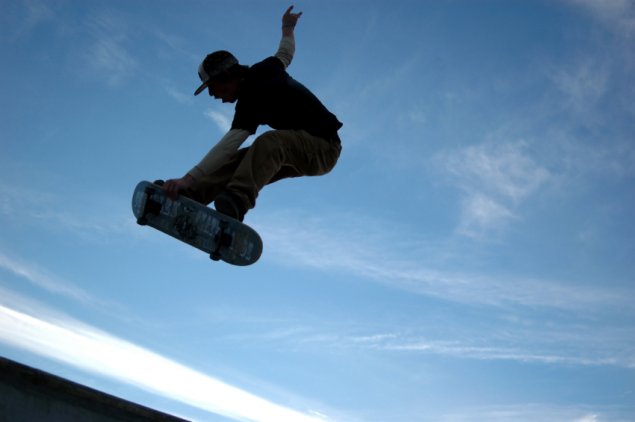 If you’re a skateboarder and you regularly enjoy hitting up Canberra’s landmarks for a skate, prepare to be disappointed.

The National Capital Authority (NCA) is making some of our national institutions skateboard proof.

Yep. Skateboard proof. I didn’t even know people skateboarded at our national institutions, let alone consider that to be a popular spot. According to media reports from earlier this week several of our institutions already have skateboard deterrents on them.

My view on the NCA isn’t a secret – I think it’s a party pooper that always seems to spoil other people’s fun when it isn’t actually causing any harm – i.e cutting all the love locks off Aspen Island Bridge.

However, I did think carefully about the idea of people skateboarding on our national institutions because they’re kind of a big deal (the buildings, not the skateboarders – though some of them may try and tell you differently). I don’t like the idea of people skateboarding at the War Memorial as it seems quite disrespectful to our troops, past and present. However, I don’t really have a problem with skateboarding around say, Old Parliament House, as long as they’re not getting in anybody’s way, being unsafe, or damaging the monuments.

There’s no indication that the skateboarders are doing any of these things with the NCA telling Fairfax Media that memorials and institutions are for looking at, not skating on. I could completely understand this if it was followed up with the damage being caused, or the case of a skateboarder injuring a bystander.

The NCA went on to say that skateboard deterrents are installed across the capital on handrails, planter beds, fountains, and retainer walls. I have no idea what a skateboard deterrent looks like – I imagine something spiky to prevent grinding however I haven’t come across anything like it.

What do you think? Should skateboarding deterrents be put in place across town – national institutions or not, even if it’s not causing any damage?

I’m not sure why you seem to have such a problem with the NCA taking a long term view, and taking steps to prevent damage before it’s happened? Just because love locks aren’t causing damage now, doesn’t mean they won’t in the future. Same with skateboarders.

I certainly don’t think every wall and park bench needs to be skateboard proof, but I also don’t think that skateboarders have a right to skate things like monuments. It lacks respect, and eventually it WILL cause damage. The NCA acting now to prevent that damage seems like a wise use of resources.

As usual the comments are full of misinterpretation.

I am a skater and have been for a long time. there are 2 types of skateboards, short and long. Long have bigger wheels and used more for transportation/bombing hills. Shortboards are your general skatepark style board for doing tricks.

I don’t think it is possible to tell anyone they can’t use a non motorised form of transport in any proximity to any building as use of that space is basically a statutory right so before you commenters get all huffy about something you don’t even understand let me try to inform you.

“Skaterhaters” as they are known, are little stainless steel bits of angle put at specified lengths apart on steel or masonry handrails, ledges and walls to stop skateboarders from grinding their truck/wheel on the ledge. they are EVERYWHERE if you have a decent look, they all through civic and Gungahlin.

The issue is not simply riding a skateboard near these buildings, but it’s the ledges and walls around any buildings that really cop damage from skateboard and BMX riders as well, waxing the ledge and then grinding it on their boards or BMX pegs.

As some of you have said, yes we have great access to skateparks in canberra, Belconnen skatepark is one of the best skateparks in the southern hemisphere but it will never deter skaters from looking for their next ledge or rail to ride for a video or a photo.

From what I heard on the radio, the skateboarders have been damaging a particular statue (King George V outside OPH). The ground around the statue has been left damaged and dangerous according to the radio report. Not sure what we should tolerate about that just because someone wants to get along on their four wheeled contraption and have some fun.

The youth are up in arms if skate parks aren’t provided, but don’t use them when they are. Just because you can doesn’t mean that you should.

Just what a tourist, and elderly member of the public or a small child needs when looking over national monuments and buildings is a skateboarder hurtling at a great rate of knots at them.

We built these facilities for this purpose, use the appropriate area

If skaters are going to skate, do it there.

However, I don’t really have a problem with skateboarding around say, Old Parliament House, as long as they’re not getting in anybody’s way, being unsafe, or damaging the monuments.

That’s the issue – they do get in the way, and they do damage things. You can grind on walls without damaging them, and you can kick flip over things without hitting them more often than not.

There are plenty of places around the city for skaters to skate. They don’t need to be able to do it around national institutions.

But skating shouldn’t be policed in other public places as long as it isn’t disrespectful, doesn’t disturb others and isn’t dangerous.

Skaters gonna skate, NCA gonna put spiky things on handrails because it’s run out of fun things to ban now that the love locks on the Aspen Island bridge are gone…

If we have to put deterrents on war memorials, make sure they are razor sharp for the ones who still can’t grasp the concept of respect.

John Moulis - 5 hours ago
"Maintain the rage" Gough said on Tuesday. For three days they did. Then came an Aussie weekend at the beach in the sunshine... View
Janet Mulgrue - 16 hours ago
Peter Mackay time will tell View
Peter Mackay - 16 hours ago
Janet Mulgrue Sure. Just like Whitlam. But when the people got a say, they picked Fraser over Whitlam every time until Whitla... View
Lifestyle 6

Capital Retro - 11 hours ago
When I was younger I climbed to the top of Pidgeon House Mountain inland from Ulladulla and was amazed to find some Banksias... View
Karina Widjaja - 15 hours ago
Lyneham ... spotted 3 💛🖤 View
Suzanne Lloyd - 16 hours ago
They are regular visitors in Latham. View
News 46

Mathew McMahon - 19 hours ago
When the Electric switch's are turned off or on at the Belconnen Sub station an explosive noise is produced which echos acros... View
News 6

O L - 22 hours ago
Sadly I know the father of one of the boys killed here. They were driving back from the coast after a night fishing trip and... View
News 5