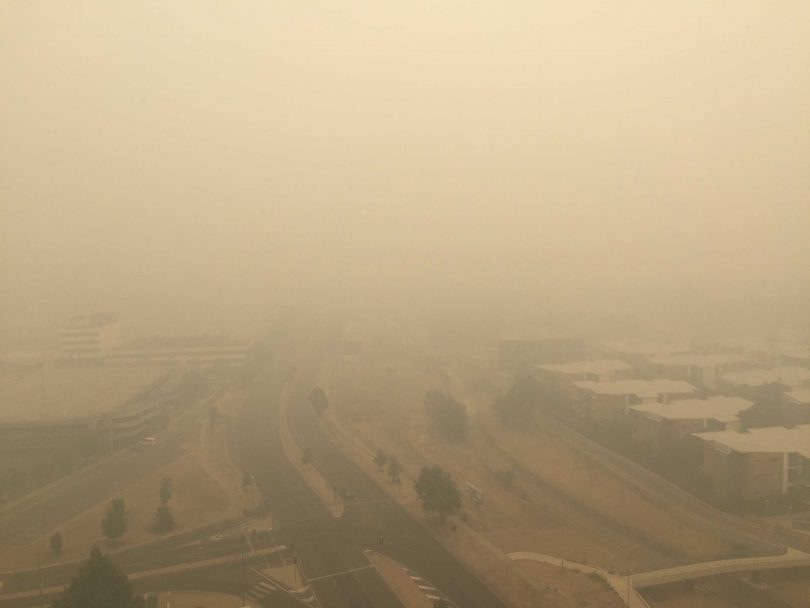 A murky view of Woden on 1 January. Photo: Region Media.

The safety of patients and staff in Canberra hospitals was not endangered during the height of the summer’s bushfire emergency, according to Canberra Health Services CEO Bernadette McDonald.

Ms McDonald today moved to water down a news report that the safety of patients and staff was compromised during the bushfires, and that smoke filling the hospitals contaminated equipment such as MRI machines, CT scanners and sterilised equipment.

“We asked all clinical staff to report or identify any patients that had any negative impacts from smoke – if they wanted to be moved or wanted us to do something different with their care or treatment – and we had no reports from any of our clinical staff of that happening,” Ms McDonald said.

A news report by ABC online today (May 25) said the air quality on hospital wards, including at the neonatal intensive care unit, the emergency ward and the respiratory and sleep disorders ward were at levels that were “unhealthy for all” in the days after New Year.

All three of Canberra’s hospitals were impacted by varying levels of smoke that passed through the air-conditioning units, which also had to be turned off while excessive heat and smoke filled the air.

ACT Health Minister Rachel Stephen-Smith said the smoke caused issues in most buildings in the ACT, but Canberra Health Services did everything it could to mitigate the effects.

“I attended a couple of the all-staff briefings where people were able to talk through their concerns about the smoke and the comfort packs that were being provided and I’ve been assured that the main parts of our infrastructure in the Canberra Hospital was managed as well as it possibly could be in the circumstances, which were extremely unusual,” Ms Stephen-Smith said. 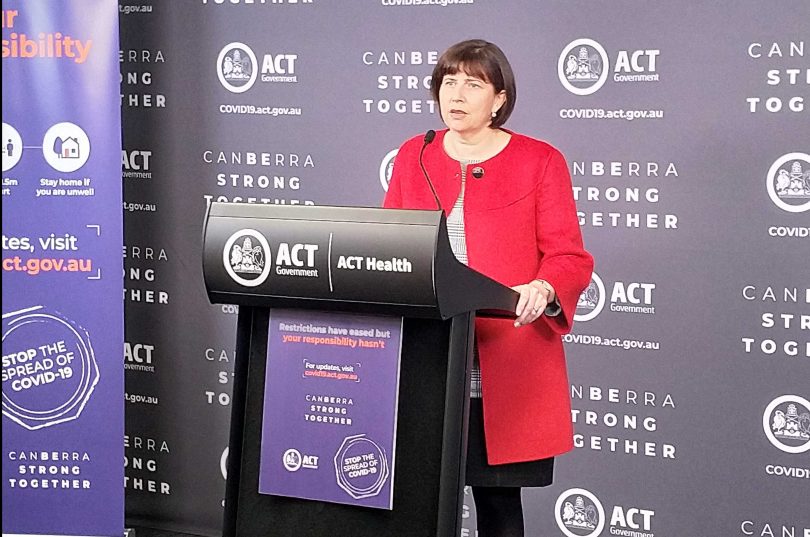 Ms McDonald said Canberra Health Services had been planning to change the hospital’s air conditioners filters; however, the COVID-19 pandemic had temporarily halted that work.

“We were just getting our teams in to update our filters when we got hit with the pandemic, so we will complete that planning process in the next few months,” Ms McDonald said.

“We do have a few months before the next bushfire season is upon us, and I just hope that it is nowhere near as bad as the bushfire season we’ve just had. But we will be prepared and we’re also talking to our interstate colleagues in other health services that had exactly the same experience.

“We’ve also updated our business continuity plan so that every area knows what it has to do. People also need to know that this was unprecedented and most of our services don’t prepare for smoke coming into our buildings.

“We have also looked at our filters and how often we need to change the filters. It is really expensive and time-consuming to change our filters, so we want to make sure that we do it at the right time.”

However, the air conditioning units themselves at Canberra’s hospitals will not be upgraded when the filters are changed.

During the height of bushfires just after the New Year, the air quality in Canberra was among the worst in the world.

The ABC reported today that particulate matter levels inside the Canberra Hospital were considered “very unhealthy” in the reception area of the acute elderly care ward on January 6 and 8 and the radiation therapy control room on January 6.

The laboratory manager at the Sleep Disorders Unit wrote that bedrooms were smoky and hazy, and conditions were “not conducive for sleeping”.

Ms McDonald also confirmed that some MRI machines that respond to extreme heat and smoke had to be turned off for safety reasons.

“That’s a safety feature that all MRI machines have and we experienced that with our machines. But we also have business continuity plans in place to mitigate that,” she said.

Comfort packs with eye drops, bottled water and throat lozenges were dispensed to staff, and on January 9, air purifiers were set up in some of the most critical locations.

ACT Commissioner for Sustainability and the Environment Dr Sophie Lewis told Region Media while the ACT is very forward-thinking in terms of planning for such events, more can be done to minimise our exposure to dangerous air quality levels.

“I think the idea that that level of smoke was healthy for any Canberran doesn’t really fit with the data that I’ve read,” Dr Lewis said.

“In terms of our health care sector, I think we’re seeing that this event showed we are not really well equipped to deal with what happened. We should be thinking now about what happened and if the summer presents us with months of heavy smoke again, what do we want in place now to protect our health.”

I wandered into my local large hardware store in Tuggers when the smoke was bad, and it looked like a mist had formed.

Not real sure what the hospital could have done.
Pulled everybody out and set up camp in Wagga ?

If you pour water on fire it’s likely to cause more smoke not less.

Gabriel Spacca Or a mixture of smoke and steam.

I can vouch for the air quality being different but nowhere near as bad as made out by people not aware of the operation of the air circulation systems and extra infrastructure put in place to assist with that.

Danielle Crombie - 1 hour ago
Melissa you missed Matt in Jugiong last visit 😒 View
Fred Lamb - 2 hours ago
Who cares? He is supporting the Australian film industry. View
Alwyn Edwards - 6 hours ago
Had a beer with Richard Clapton 25 years ago on the Gold coast View
Opinion 6

@The_RiotACT @The_RiotACT
The fabric of our society still does not provide men and women with an equal chance, and it is deeply connected to women's homelessness, writes Belinda Munn https://t.co/VjU3kS9gfp (1 hour ago)

@The_RiotACT @The_RiotACT
A jobs boom in regional NSW has meant towns such as Braidwood, Batemans Bay and Jindabyne are struggling to fill vacancies https://t.co/jQTZooXddf (4 hours ago)