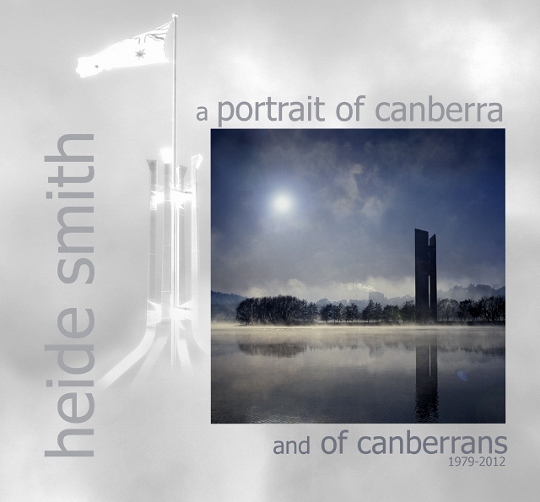 Heide Smith will be signing copies of her new photography book A Portrait of Canberra and of Canberrans 1979-2012.

As part of the Canberra Centenary celebrations, Heide has published A Portrait of Canberra and of Canberrans 1979-2012. The images in the book record a third of the lifespan of Australia’s National Capital; it’s buildings, monuments, institutions, and it’s people.

Heide has been photographing Canberra for 34 years. She has previously published four books of photographs of Canberra.

Wonderful work as always from Heide.

Shame this work would be considered so “conservative” and untrue to Canberra according to Ian Warden:

‘Conservative Canberra painters and photographers are preoccupied with the city’s monuments, its pretty parrots and mist-enhanced lakes.
Their Canberra has, eerily, no suburbs at all.’

Chalk up another a-hole point to Warden’s tally.

Plus we did Belco Pride so very long ago

Heide has done some amazing photos over the years. Can’t wait to see what she has in her new book.

Lucy Irene - 1 hour ago
Mmm, not sure why ‘rainbow’ roundabouts could be an issue, curious! View
News 36

Capital Retro - 6 hours ago
One of my favourite reads is "Pigeon House and Beyond" by The Budawang Commitee. View
News 4

Capital Retro - 6 hours ago
When you say "we", who exactly do you mean? How about you lead by example and tell us what you would do because many before y... View
chewy14 - 6 hours ago
Robert, Yes we do. The first part of that would, however be to admit that Indigenous people commit crimes at rates many times... View
Robert - 6 hours ago
Those numbers reflect the numbers of indigenous people in our jails. Surely we need to do something about aboriginal people b... View
show more show less
*Results are based on activity within last 7 days

@The_RiotACT @The_RiotACT
The town of Jugiong’s landmark poplars are nearing the end of their lives and are set to be replaced by lipstick maple trees https://t.co/mpdMkiNXWz (3 hours ago)