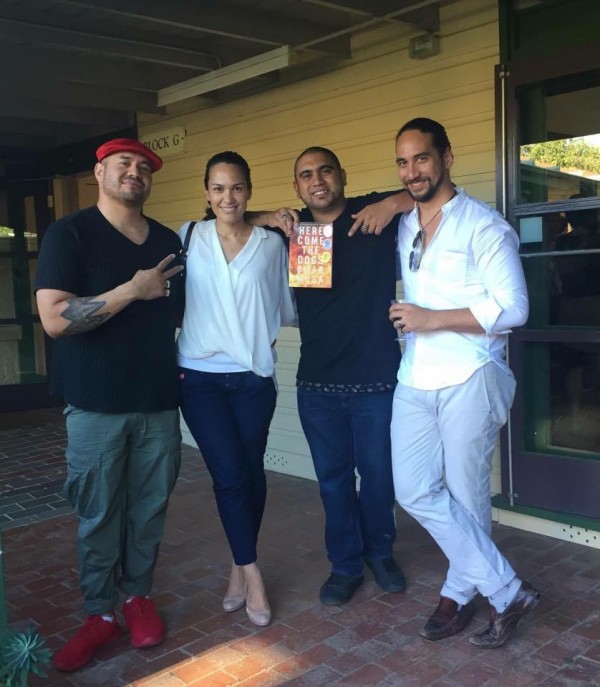 Mark Henshaw has won the ACT Book of the Year award for The Snow Kimono with Omar Musa taking out the People’s Choice award and receiving a Highly Commended for Here Come the Dogs.

Henshaw won $10,000, while Musa collected $2000 for Here Come the Dogs. The other two shortlisted authors, Jono Lineen for Into the Heart of the Himalayas and Sam Vincent for Blood and Guts: Dispatches from the Whale Wars, won $1000 each.

RiotACT predicted Henshaw and Musa would win those categories when the shortlist was announced, but Henshaw wasn’t at the event last night and only found out when a friend filled him in this morning after seeing a tweet about it. ArtsACT did not contact him to alert him to the win, and when we last checked, the ArtsACT Twitter account had not made an announcement about the win.

A spokesperson for ArtsACT would not comment on whether it was policy for them to contact the winner and finalists to let them know of the result.

The ACT Book of the Year has in recent years been announced by ACT Minister for the Arts Joy Burch, but Ms Burch went on leave early this week after resigning from the police portfolio as police investigate matters surrounding a conversation between one of her senior staff members and the ACT chief of the CFMEU.

The ACT Government was represented instead by ArtsACT Arts Support Manager Robert Piani.

The Book of the Year awards were presented at the ACT Writers’ Centre’s annual Christmas party and awards night at the Gorman Arts Centre, which meant around 110 guests were there rather than a handful as was the case in 2014, when the winning author was the only one of those shortlisted to be invited to a press conference event at the ANU for the announcement.

ArtsACT has this afternoon updated its website to announce the winner. Here is part of that announcement:

“The judging panel of Kathryn Heyman, Justine Moloney and Chris Hammer read, shortlisted, and selected the winning book and commented on the diversity of writing talent in the ACT, which continues to contribute high quality works of national significance to the literary landscape.

The panel praised The Snow Kimono as a polished work of thoughtful consideration that is accomplished, intriguing and well-resolved. The Snow Kimono also received the NSW Premier’s Literary Award last year.

The panel also highly commended Omar Musa’s Here Come the Dogs. The panel enjoyed its unsentimental depiction of characters that provided depth and honesty to the narrative. Omar receives $2,000 for being highly commended.

Canberra region readers also enjoyed Omar’s book, which has also been named the ‘People’s Choice’, with more than 700 people voting.

To be shortlisted for the ACT Book of the Year Award is a mark of quality writing and dedication to craft. For the first time, prize money of $1,000 is awarded to the shortlisted authors Jono Lineen, for Into the Heart of the Himalayas, and Sam Vincent for Blood and Guts.”

The Writers’ Centre’s awards followed the Book of the Year announcement. Here are those winners:

Pictured above are Hau Latukefu, Shani Latukefu, Omar Musa and Kilifoti Eteuati celebrating Musa’s win of the ACT Book of the Year People’s Choice Award as well as a Highly Commended for the main prize last night. Photo: Suzanne Kiraly

In addition to her role as acting editor of the RiotACT, Charlotte Harper runs Editia Press, a small book publisher based at the Gorman Arts Centre. Editia’s ’18 days’ was shortlisted for ACT Book of the Year in 2014. Charlotte is also a former board member of the ACT Writers’ Centre.

Nawaporn Posuwan - 9 hours ago
Merryn Orchard look very nice I should go there and try soon. View
Songchat Chatkeo - 11 hours ago
Awesome krub View
Merryn Orchard - 13 hours ago
Nawaporn I think you would be the best judge for me 😋 View
News 34

Sarah Jenkins - 15 hours ago
It was heavily ironic to see people baying for the cancellation of the NYE fireworks, and then to watch the same people less... View
Mark Oz - 15 hours ago
@Jim McMahon Actually they’ve been involved quite a bit for some time - https://the-riotact.com/act-firefighters-deploy-as-... View
Chris Lenihan - 17 hours ago
Wayne Mccauley exactly Wayne Hats off to all the awesome fire fighters at Summernats... View
News 3