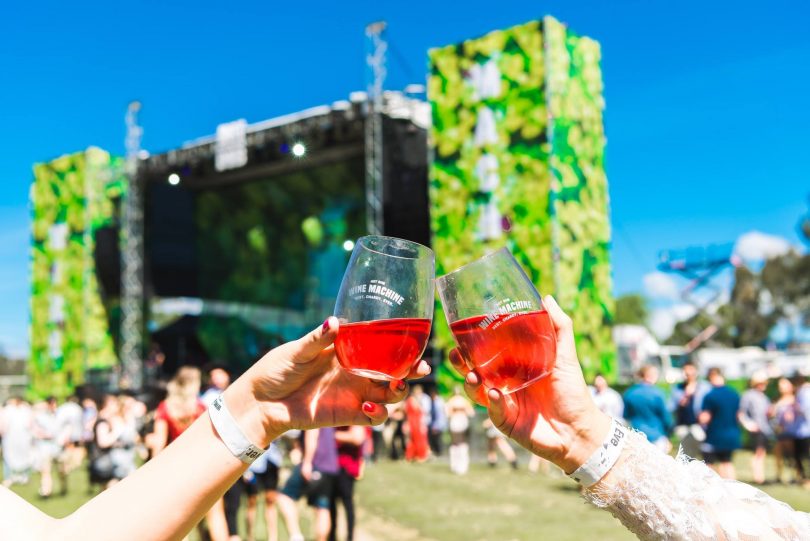 A day and night full of wine and music in the picturesque surrounds of Pialligo Estate to mark the Easter Long Weekend on Saturday the 31st of March sounds alright to us!

Wine Machine is a full-bodied day of wine, food and live music, showcasing both the splendour of our nation’s most picturesque wine regions and the spectacular music artists borne from Australian soil.

Canberra’s very own Pialligo Estate is the last stop of the 6 region tour. Even though it is only 10 minutes from the city, it feels like an entirely different world when all you can see is greenery, fruit trees and rolling hills in the distance. The stunning property is sure to make a perfect backdrop for the festival overlooking Mt Majura, the vineyards, Paul Bangay designed orchards and olive groves. 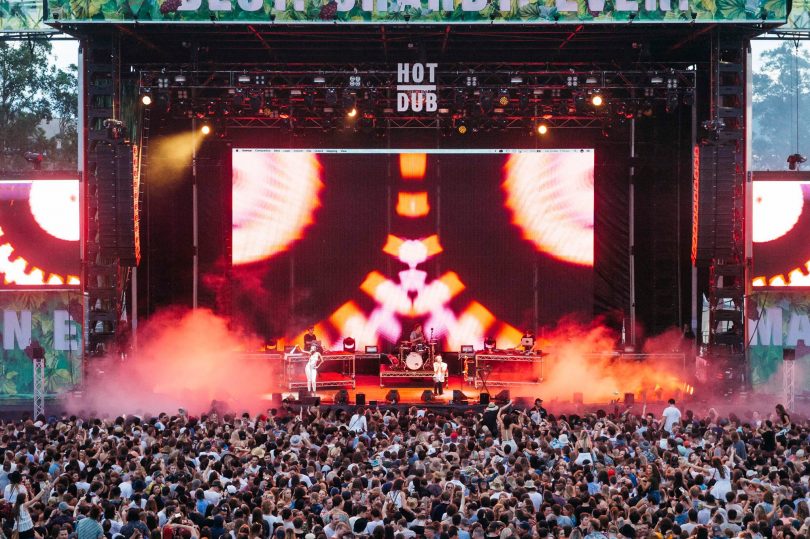 Along with the location, the music lineup is also stellar with Tom Tilley from Triple J hosting:

Since first launching his time-travelling, ‘dance-through-the-decades’ audio-visual party concept in 2011, Sydney’s Tom Loud has grown his project into an absolute monster. This Australian DJ showcases songs from every decade and genre of music, weaving it into one expansive, electrifying, music history lesson.

2017 was Hot Dub Time Machine’s biggest year yet – one that began with the headline spot on the revered national Falls Festival tour, and ended with Hot Dub ringing in 2018 with over 10,000 people in Sydney at a New Year’s Eve festival of his very own creation – NYE in the Park. In between, Hot Dub entertained thousands at home and abroad – highlights included a USA Tour, performing two of the largest shows to ever take place in Edinburgh Fringe Festival, raising the roof at London’s Brixton Academy, island party Your Paradise, headlining Australia’s Melbourne Cup, and, of course, the major success of inaugural Wine Machine. 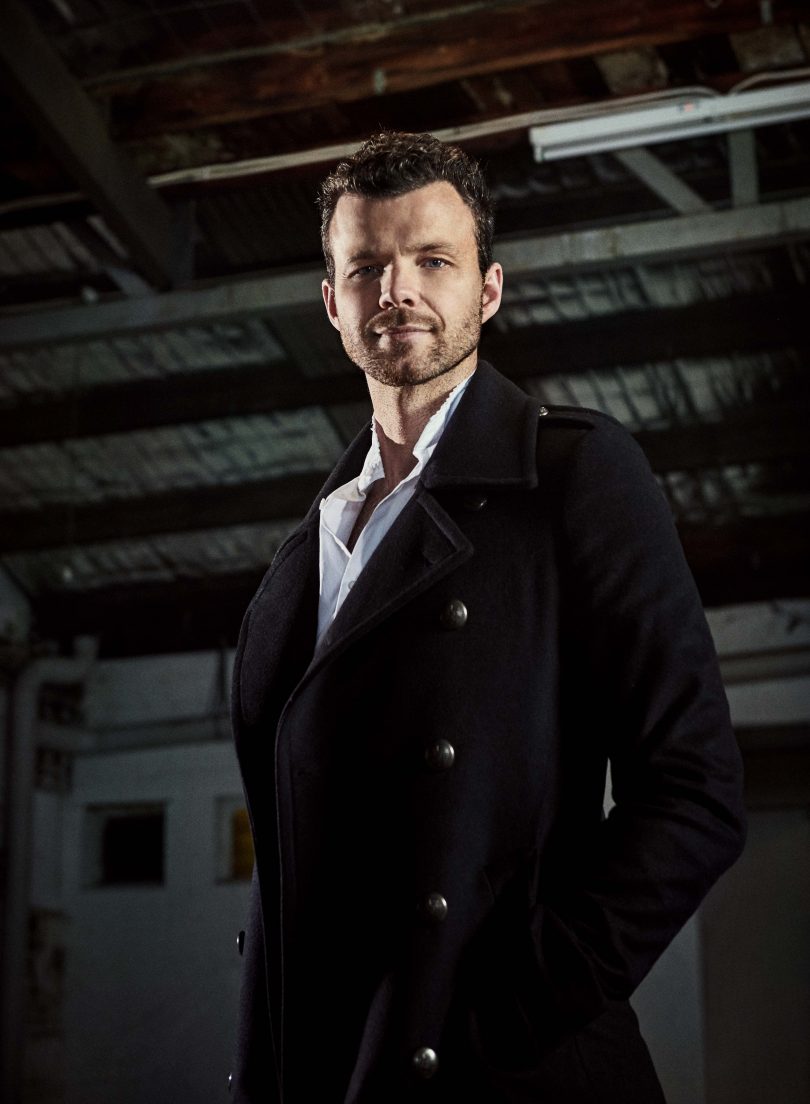 It was back in 2004 when Miss Connie and Black Angus started making beautiful music together. A series of singles at first then, in 2006, their self-titled, 3 x platinum debut album. Spearheaded by a spectacular salvo of chart-topping hits – UFO, Pictures and I Love It – Sneaky Sound System won ARIA Awards for Breakthrough Artist and Best Dance Release, the first of 14 nominations to date.

Danny Harley, triple threat electronic producer, vocalist and songwriter, brought a much-needed sophistication to electronic music under his production moniker of The Kite String Tangle, that now sees him – like a rare few before him – oft-imitated, never duplicated.

A supreme slice of Slow Motion House, armed with a swaggering bassline, syncopated synthesizers and hands that pretty much clap themselves, ‘Lay Down’ is the entree to Touch Sensitive’s debut album, out later this year on Future Classic.

Luke’s obsession with bringing us contagious, hip-gyrating electronic funk is only rivalled by his addiction to vintage synths and badass drum machines. His family includes vintage Moog, Oberheim, Roland and Korg just to name a few. We see some of these beasts make a cameo in Luke’s live show on the road which features synths, drum pads and the quintessential 80s keytar.

Haiku Hands, the elusive crew of artists whose influence can be felt across live performance, visual art and production, have exploded onto the scene with their irresistibly danceable single “Not About You”.

DJ, triple j presenter, and the creative driving force between Hand Games and TAXX, Sydney talent Luen Jacobs is a familiar face in our Australian music family. DJing at a stack of club venues and festivals, Luen has recently returned from presenting and selecting on main stages across Groovin’ the Moo’s National Festival tour, played Splendour in the Grass, and has DJ’d at Strawberry Fields, Secret Garden Festival, Tasmania’s Dark MOFO and more, and joins us at NYE recently returned from her own headline DJ tour across Australia. Luen digs sonic inspiration from dance, experimental and traditional music worldwide, and her infectious energy – she often jumps up on the mic and involves her audience – coupled with her impeccable taste and desire to entertain, is sure to have you become a firm fan when you hit her dance floor. 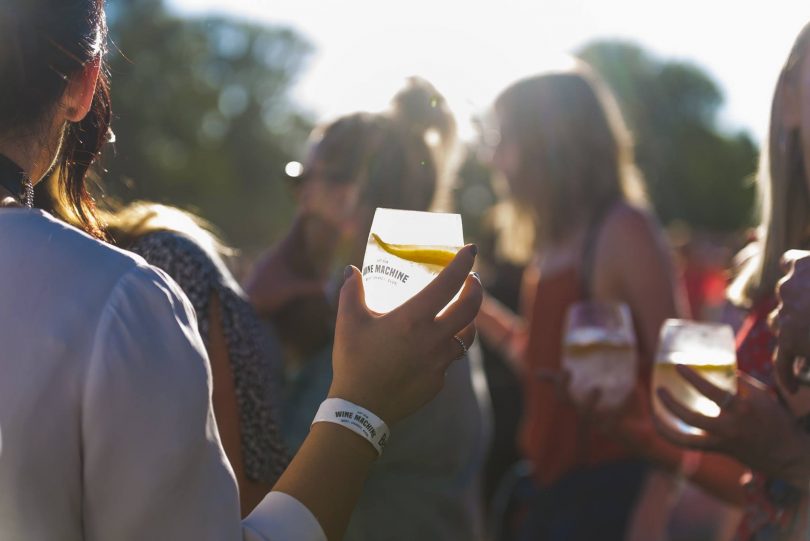 This 18 + event on Saturday the 31st of March starting will also be packed full of wine and food vendors and is selling out fast, but limited tickets are still available, visit: http://wine-machine.com

Capital Retro - 22 minutes ago
Good luck with that. I suggest you read up on "social disamenity" from waste odour and commence a class action against the AC... View
Opinion 61

gooterz - 15 hours ago
If they don't stop tracking us when its of no use. They'll further make it harder to bring in tracing when we next need it. S... View
show more show less
*Results are based on activity within last 7 days

Peking Duk is back on Canberra’s menu this weekend

@the_riotact @The_RiotACT
Has your #dog ever become stuck in a toy? A Canberra vet warns it may be more #dangerous than owners realise https://t.co/TJBn419eB7 (7 minutes ago)