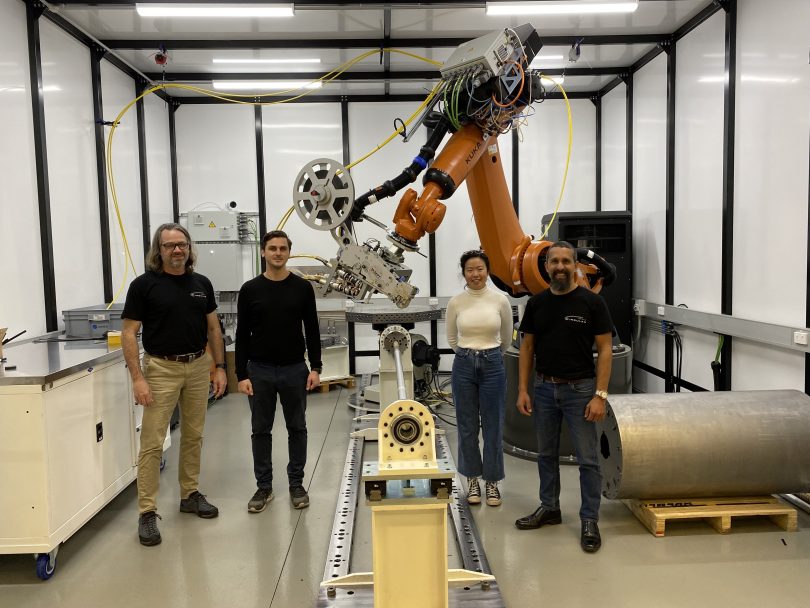 A space company in the regional NSW town of Yass has partnered with the Australian National University (ANU) in Canberra to develop and trial a strong, lightweight and heat-resistant material they hope will eventually be used to build rockets and spacecraft.

Cingulan Space and ANU’s Training Centre for Automated Manufacture of Advanced Composites (AMAC) recently completed a research project using a robot to manufacture an antenna mast wrapped in tape made from carbon fibres.

If it passes ANU’s manufacturing quality controls, the mast will be Australia’s first prototype of a spacecraft tracking appliance made from an advanced composite material, and will be tested on an antenna at Cingulan Space’s satellite tracking station in Yass.

This is a successful first step in a long-term plan to demonstrate advanced composite automated manufacturing for space vehicles, using ground-based vehicles and then aerospace vehicles, such as drones, to prove they can also be used to build rockets and spacecraft.

READ ALSO: What on earth is a patent box? And why are Canberra tech firms celebrating?

“Advanced composites are basically materials made from carbon fibres which makes them super strong and lightweight and gives them interesting thermal properties,” said Cingulan Space co-founder and CEO Keith Rosario.

“We have always been curious about these materials and during the past two years, we’ve been looking at the capability to apply advanced composite materials to Australia’s space industry.”

Mr Rosario said rocket manufacturers are looking for lightweight materials that are strong and can withstand launch temperatures to reduce the size and weight of the vehicle.

Why is there a space company in Yass?

Cingulan Space was established in Yass in 2016 to track overhead satellites and communicate with them using radio signals.

Now the company has satellite tracking stations in Yass and Wagin, in Western Australia, and soon it will build another in the Northern Territory to track satellites sent into space by a company in the US.

“There are more satellites up there than we can track,” said Mr Rosario.

“The number of satellites that could be in space is growing exponentially. Elon Musk with SpaceX (Space Exploration Technologies) is adding 36,000 satellites.”

Cingulan Space needs to be able to send and receive data from satellites, which could be anything from a photo or video, to moisture and mineral data.

Yass may seem a strange place for a satellite tracking station, however Mr Rosario said the town’s remoteness stops interference with the company’s radio signal technology.

READ ALSO: What do Canberra, carbon dioxide and shampoo have in common?

As well as tracking satellites, the company has also been part of missions to launch satellites into space, and was a finalist for the Business of the Year category in the Australian Space Awards 2021.

Mr Rosario, who was also a finalist in the Executive of the Year category at the same awards, is keen to educate the next generation of space enthusiasts, and he often shares his time with schools in the Yass Valley for STEM (science, technology, engineering and maths) projects.

Partnering with ANU also meant one of the university’s students, Rita Tri, got the chance to be mentored by a real space company.

“It’s so important for undergraduates to have real contact with the industry,” said Mr Rosario. “I feel proud to work in this industry and believe I should pass that on.”

Tracy Lee - 12 minutes ago
Sure if you got a spare $60k lying around View
Belinda Makrides - 2 hours ago
Nothing against america, just rather my toyota to me built in Japan and I want a tesla built in USA there country of origin s... View
Mark Johnson - 4 hours ago
Belinda Makrides don’t think it would make a difference. Toyota have a pretty good rep no matter where they are made. The H... View
Public Sector 14

Tracy Hancock - 2 hours ago
Nurse and midwife here. Have looked after patients who were Covid positive and didn’t know it when they saw me. I haven’t... View
Sa Rah - 2 hours ago
Yeah, not really sure this was well considered both for availability and practicality.... View
Jay Kay - 2 hours ago
So this wave will be a dead cat bounce, with another surge driven by children spreading towards their families. Hope business... View
News 12

Capital Retro - 3 hours ago
Well, it's the first one and it's a failure so they don't want all of Canberra to know about it so it doesn't matter really w... View
Capital Retro - 6 hours ago
Another ACT government "pop-up" failure. View
kenbehrens - 6 hours ago
CR, I'm not sure that he's been this far south? There's no Light Rail planned for Erindale! Why didn't they place this large... View
Property 6

doomattheend - 4 hours ago
Good to see the Greens MLA attacking a private school for a federal issue rather than keeping the labour party in check. Of c... View
Opinion 43

HiddenDragon - 4 hours ago
Boiled down, that sounds like an argument for more people on the public payroll in Canberra - good luck with that when the Au... View
Monda Scoltock - 4 hours ago
Alexandra Hunter - no doubt! View
JS9 - 6 hours ago
While the health system had in totality coped fairly well, I'm not convinced it has held up as well as it may appear. A not s... View
News 32

Kalo Arepo - 6 hours ago
Also in cases of bushfires gum trees explode like bombs whereas many species of exotic deciduous trees are fire retardant-thi... View
show more show less
*Results are based on activity within last 7 days

White-tail spiders are out in greater numbers this year after the wet weather, but experts say their dangerous reputation is...
Motoring 27

@the_riotact @The_RiotACT
#Canberra has plenty of delicious dining venues where carnivores, omnivores, #vegetarians and vegans can all enjoy a meal together. Here are some of the best https://t.co/plnOQDKZ25 (5 hours ago)

@the_riotact @The_RiotACT
This beautifully modernised three-bedroom family home at 27 Bullock Circuit in #Kambah is new to the market, offering an opportunity for a #family to snag a perfect first home on a prime piece of land https://t.co/RX2qhxXXVq (6 hours ago)