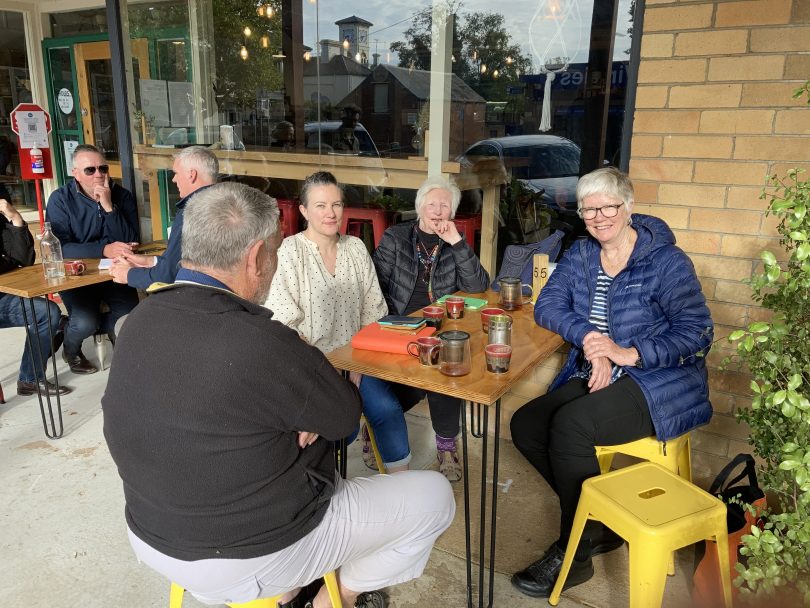 Jo Hicks (left) and other members of the Yass Rural Australians for Refugees (RAR) group meet with Louise Remond from the national RAR group. Photo: Supplied by Jo Hicks.

Jo Hicks felt helpless about the treatment of refugees in Australia after seeing countless images on television of people trapped in offshore detention centres.

Then she discovered her town in regional NSW was home to a group of like-minded people who were making it their mission to welcome refugees to Australia.

The Yass Rural Australians for Refugees group partners with similar organisations to raise funds to assist refugee families in the region and promote greater awareness of the issues facing refugees settling in Australia.

“There was a family who came to Yass a few years ago with no clothes or heating, so we bought them clothes and heaters,” said Jo.

“It happens quietly in the community.”

The group is made up of about eight volunteers who meet monthly and can call on more volunteers from their 60-strong membership and 300-plus followers on Facebook if needed.

As there aren’t always refugees living in the area, a portion of the funds goes to national and international groups such as the Asylum Seeker Resource Centre and UN Refugee Agency, which supports refugees living across Australia and provide aid to countries in crisis.

“A lot of our work is helping groups that are helping people on the ground,” said Jo.

The group also works with the local high school to promote a greater understanding of the challenges faced by displaced people and their families.

In 2018, the group helped students at the school take part in a 40-hour famine backpack challenge.

During the challenge, the students raised money for refugees and had to give up something such as food, furniture or technology for 40 hours or survive 40 hours with only a backpack of items.

Jo, who works in communications in the public service by day, said she enjoys being part of a group of people who feel as strongly as her about supporting refugees in Australia.

“It’s nice to be among people who are as passionate and angry about it,” said Jo.

“When I was backpacking in my 20s, everyone thought Australia was such a wonderful country. Now when you go overseas, people ask why we’re locking up refugees.”

Yass Rural Australians for Refugees formed in 2014 following the death of an asylum seeker in Australia’s offshore detention centre on Manus Island.

The 23-year-old Iranian, Reza Berati, was beaten to death during a riot.

Interestingly, similar groups have existed in Yass for more than 50 years.

According to locals, the town hosted Vietnamese refugees in the late 1970s and early 80s.

The group held a panel discussion about the experience during Refugee Week 2021 and funds raised at the event are going to groups providing refugees with legal support to obtain visas.

“80 million people are displaced and four million are seeking asylum. Those numbers are getting worse, yet Australia is reducing its intake,” said Jo.

“I think we should be doing more to help people worse off than we are.”