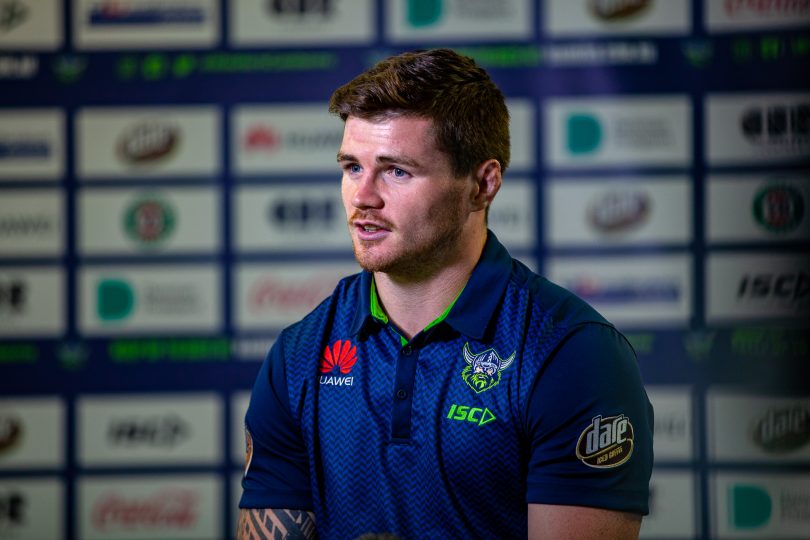 John Bateman has left his family back in the UK to play for the Raiders. Photo: George Tsotsos.

The Raiders new recruit John Bateman concedes becoming a father at just 16 years of age forced him to grow up quicker than most.

He is adamant that rugby league and his close-knit family has been his salvation and if he didn’t have those two anchors in his life, he wouldn’t be here in Canberra.

To understand what drives Bateman on the football field it’s important to look at the life travelled so far.

Growing up in Bradford, UK, Bateman is the first to admit he wasn’t the best-behaved child. He would start fights at school, would skip going altogether and was headed down the wrong road.

Raised by his single mum, with his dad living a couple of hours away – “but in England, a couple of hours away is a trek” – his upbringing in one of the roughest estates in Bradford was far from smooth. It was his mother’s idea for him to start playing rugby league as a healthy way to let out his aggression as a 10-year-old.

Six years later, Bateman’s life was at a crossroads. Finding out, while he was in class, that he was to become a father at the tender age of 16, Bateman was faced with the decision to accept parenthood or walk away from the responsibility.

He chose to stay, and admits it was the best decision he ever made.

“Being a dad so young has made me into who I am today, to be honest,” he told Region Media. “Being a 16-year-old lad from where I am from is not the best thing.

“It is a tough upbringing and a few of my mates were going down the wrong tracks. But becoming a dad made me grow up a lot faster and realise that I was responsible for a little girl and that I had to step up.”

Rather than let his daughter Millie’s arrival halt his rise, the forward debuted for his home club a year later and has not looked back. He has played 167 first-grade games with the Wigan Warriors and Bradford Bulls and has won two titles with the Warriors across his eight years in the UK Super League.

He is now an integral player in England’s rugby league squad, having played in England’s grand final loss in the 2017 World Cup and also in last year’s 2-1 series win over New Zealand.

A self-confessed family man, the England international said packing his bags and moving 17,000km from his family was the toughest thing he has had to do in his 25-years of life.

I love you all to bits and I’m going to miss you so much but I’ll see you all in a few months??
Manchester ?? Singapore ??Sydney ??Canberra pic.twitter.com/bNVLJymrJl

“Leaving Millie and my mum at the airport was the hardest thing I have ever done, to be fair,” he shared. “Saying those goodbyes to travel to the other side of the world, you think that you might never see them again. It’s an awful feeling.

“Sitting on the plane I started to question if I was doing the right thing but I put my foot forward and I’m going to stick by my decision.

“My mum, my brother and I are extremely close. It’s always been us three growing up and she has really looked after me and my brother. When I told my mum that I was moving to Austalia, she got a bit upset. I have been with her since I was a baby and she has been looking after me since then so moving to the other side of the world is a big thing.”

Great moment for me last night to lead the team out in my last ever league game for @wiganwarriorsrl . Made even better that I had my little girl,nephew and niece with me. Also another good 2 points. See you all at the semis next week ??? pic.twitter.com/1hona119KY

Bateman said he has spoken to his mum, his brother and his nine-year-old Millie every day regardless of the time difference. Speaking in a thick Yorkshire accent, he said his fellow England international and former teammate at Bradford has helped him settle into the nation’s capital.

“So I have been going with Elliot [Whitehead] so he can be my translator. I lived with Elliot for a month while I settled in. He looked after me but now I have moved to my own place, which is literally across from his.”