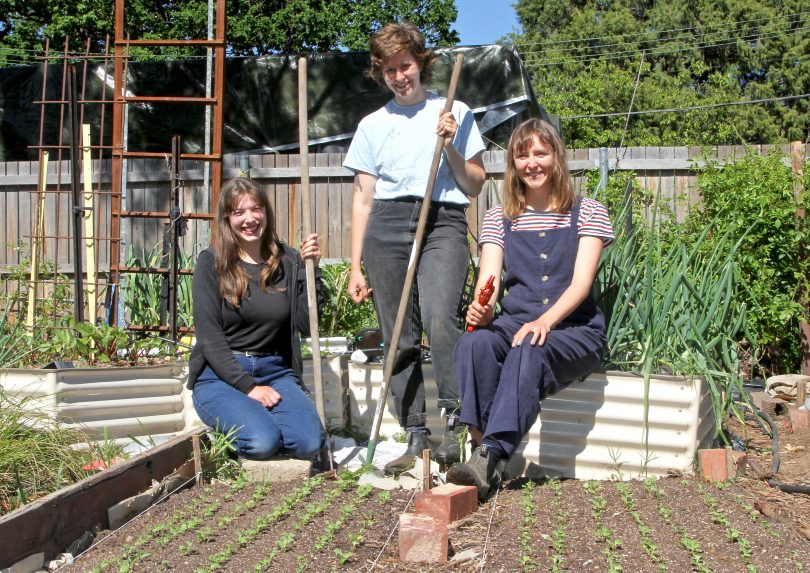 From left: Suburban farmers Bea Kelly-Loane, Karina Vennonen and Lil Costello at one of their community plots at Turner. Photo: Michael Weaver.

A hunger for knowing where their next meal is coming from is fuelling a group of inner north Canberra residents to build a network of vegetable garden plots on residential land.

“The issue of food security is an increasingly important one and the sooner we can get to work on it and create a solution, the easier it will be in the future,” says Karina Vennonen, standing in front of a crop of fresh spring onions, leeks, carrots, fennel, peas, beetroot and salad greens.

The crops are the result of a crowdfunding campaign that raised more than $12,000 from 116 supporters in two weeks for the Inner North Urban Farm.

Given the declaration of a La Niña weather pattern, meaning a predicted wetter spring and summer, the group has increased its target to $15,000 so it can include water tanks to make the plots more sustainable.

Karina and her friends, Lil Costello and Bea Kelly-Loane, had been growing food in their own backyards in the area, but after seeing similar projects, they knew a larger scale project was just a tray of seedlings away. 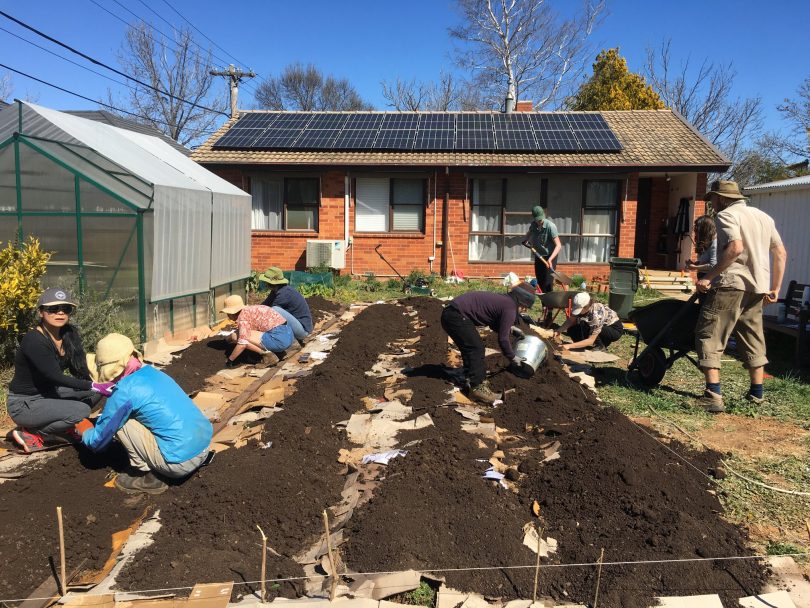 Busy workers in the backyard of a community farm in Canberra’s inner north. Photo: Supplied.

“We met through the Canberra Food Co-op so we just used their newsletter and Facebook page to put out a notice that we were looking for land with a northern aspect and access to water,” says Karina.

“We got a lot of responses so we created our own Facebook page and we soon had more than 20 offers of backyards, which is way more than we could actually work with. So now we have five plots, and as our systems of growing become clearer, we hope to take on more land and make it a meaningful job for however many people we need.”

The working bees set pitchforks and shovels into turned earth that are filled with nutrient soils and attended to by a community with deep-rooted connections to their food production.

All members of the group have a share in the food farms as well as a ready supply of seasonal crops, while food baskets can be purchased on a sliding scale of affordability so people on lower incomes can still access good quality food.

The group is so entrenched to the value of the land, it offers Indigenous owners a vegetable box.

READ ALSO: Farmers’ desperate plea for workers ahead of harvest

“We see the land we’re using as being owned by people who were there before us so an offering to Indigenous groups is a tangible way of recognising that the land we are farming on was stolen,” says Karina. “We also want to remain true to the traditional methods of using the land available to us.

“There’s so many goals we’ve incorporated into this. There’s just a real concern for the current food system, but we’ve been doing various forms of this in the past five or so years so we’re bringing that thinking with us.

“The importance of food security is so crucial, especially as we’re seeing more extreme climate events such as the bushfires and hail storms. Even COVID-19 has interrupted the usual food supply chains.

“Food is one of the most necessary parts of our life and it’s largely in the hands of people we don’t really know or understand it so we just want to support the resilience of our local food system and create job opportunities for young people wanting to farm.” 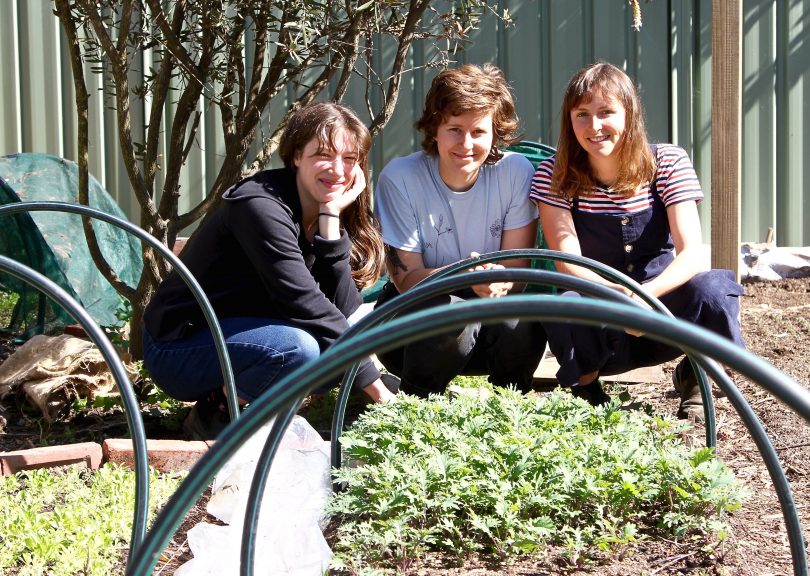 Karina and Lil say they have been pleasantly surprised by the level of interest, but never doubted the community’s connection to where their food is coming from.

“We knew the community wanted to see projects such as this, which are really serious about growing food and doing it in ways that are so beneficial for the environment in terms of lower food miles by not using chemicals,” says Karina. “We know our community is passionate about that and it’s amazing the support we’ve received so far.

“There are businesses in Canberra that already offer better alternatives to supermarkets so we just want to be another part of our local food system to increase the connection to people growing and eating the food from their own land.”

Rob Thomas - 3 hours ago
Kir not only that I have my own oxygen tank and mask. I've be arguing for a further discount as I'm not using the buildings a... View
Kir Rin - 4 hours ago
Rob Thomas do you potentially pay for other things that others may not? Do you have a separate entry? View
HiddenDragon - 4 hours ago
Another great thing about electric vehicles is that they're exempt from those old-fashioned rules about parking between the y... View
News 21

Robert Azzopardi - 8 hours ago
I think it strange that comments here suggest that scooters and their riders are the problem but not cars and their drivers.... View
Business 1

Luke Malacchi - 8 hours ago
Bill Caddey....prime for a bloke with a railbike View
News 2

@The_RiotACT @The_RiotACT
After a huge week in ACT politics, our newsletter wraps up the topics that had readers talking https://t.co/bozjQLVeve (1 hour ago)