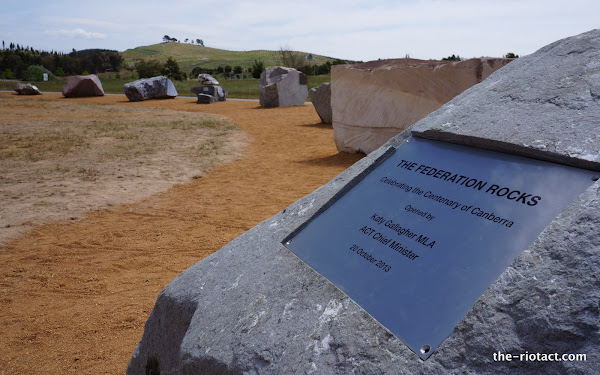 Chief Minister Gallagher has announced the ribbon cutting at the Federation Rocks display.

Sadly not a memorial to Cold Chisel, Powderfinger and The Angels, instead we have a large rock representing each state and territory as part of what is hoped will one day be a larger geological reference.

The display, at the entrance to the six-hectare site, consists of a set of large rocks selected for their significance to their home state or territory.

“In May this year I wrote to the State Premiers and the Chief Minister of the Northern Territory inviting them to supply a significant rock for inclusion in the Federation Rocks Display.

“My counterparts were unanimous in their support for the project, all eager to make a contribution to the National Rock Garden and to Canberra’s centenary year,” the Chief Minister said.

“There were some challenges involved in sending the rock contributions to Canberra, as they had to be large – they weigh around 10 tonnes and are about two metres high. Seven of the rocks are in place for the official opening, but unfortunately the contribution from Western Australia has been delayed,” the Chief Minister said.

Victoria’s contribution is reef quartz from Bendigo, a symbolic link to the gold rush of the 1850s and 1860s. The NSW boulder of Hawkesbury sandstone is instantly recognisable in the cliffs of Sydney and surrounding national parks, and as an iconic building stone for many of Sydney’s historic buildings.

“One of the great things about the centenary celebrations is being able to build lasting legacies for the community. The Federation Rocks will be a must see for visitors and school groups for many generations to come,” the Chief Minister concluded.

One hopes the school groups won’t be coming from too far afield as it lacks a bit on the wow factor right now. 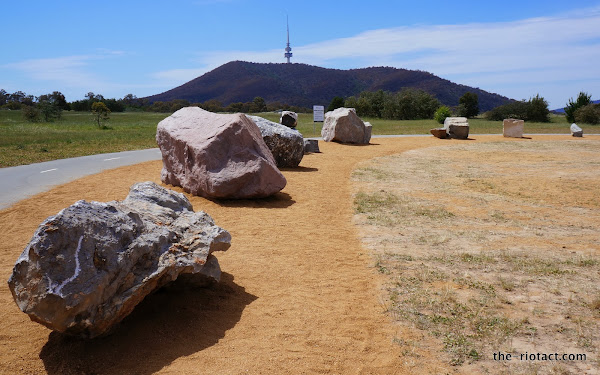 The ACT’s limestone contribution is a particularly interesting rock which is nice. 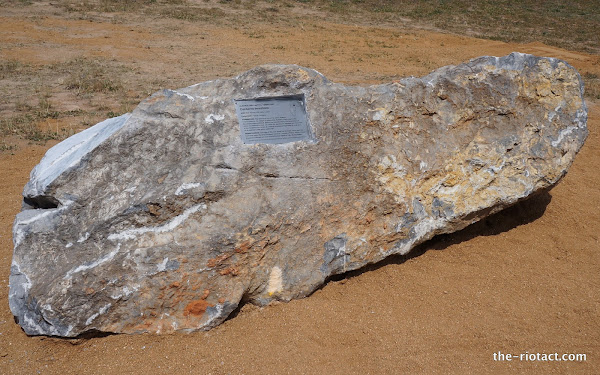 It’s a lovely part of Canberra down by Lake Burley Griffin and the old Linsday Pryor Arboretum.

Well worth a picnic!

The judge’s verdict is in; he bangs his gravel.

you were stoned writing this, no?

At least you included powderfinger in the rocking department.

Wait, what about the Oils? 🙂

JB are you sure you won’t be getting an invoice from the ACT Government for taking and using that photo?

I wonder how long it will be before these are tagged.

At least you included powderfinger in the rocking department.

That’s a load of boulderdash. The government couldn’t get blood from a stone, so they just got more stones.
Here’s a great place for that graffiti guy to show off some more space aliens.

We built this city on rock and roll?

Granite outcrops created the strong skeleton on which the soil of this city grows. Once everywhere, now few; bulldozed victims of land sale greed. Their ancient beauty is forgotten and supplanted by the sanctimonious placement of imported stones,in positions not likely to interfere with crass development.

Aindréas Síoda - 2 minutes ago
Jess Mc it was a joke View
Rastislav Zrelak - 7 minutes ago
Fire banned everywhere, why they can't use different set of lights View
Mark O'Neill - 8 minutes ago
The back burning season has reduced due to the extreme conditions. To backburn you need to apply and the conditions are so ba... View
Opinion 47

Bethany Williams - 5 minutes ago
The entire LNP is complicit in the rorting and scheming to stay in power. Their determination to remain in government obscure... View
News 12

Kirsty Luckie - 25 minutes ago
Jenelle Balch too true. View
Peter Mcleod - 58 minutes ago
Don't blame Andrew cos he will run for cover like Jon S. View
Jennie Smith - 1 hour ago
Omg i have family in Conder and Calwell they went through this at xmas in Tomikin...plz plz stay safe...love ya's😘 View
Community 2

Marion Baney - 2 hours ago
Helaine Freeman we need to take mum and dad out too see these. Lol... View
Stephanie Dodds - 3 hours ago
Brodie Gibson - has Hannah seen these yet? View
News 67

Julian Hayes - 3 hours ago
Yeah-nah.. the road into canberra isnt anything close to picturesque. View
James Logovik - 4 hours ago
I moved to Canberra last year and thought it was some kind of detention centre as well. Plant a hedge or trees around it and... View
Shane Lefevre - 6 hours ago
battery hen farm 😂😂😂 View
News 125

Ian Gay - 3 hours ago
Jennifer Crawford we are everywhere! Join us! :-) View
Geoff Briggs - 4 hours ago
So when's the exception come into force when riding a motorcycle? How do two tied laws work for people in one country? View
pete056097 - 6 hours ago
There is arguments for and against bicycle helmets. Wearing a helmet should be a personal choice. https://crag.asn.au/the-myt... View
News 21

Frank Trapani - 4 hours ago
Rona Chadwick , Would you say that it's fair to let the traditional custodians take care of the bush fires and maybe, conside... View
Rona Chadwick - 4 hours ago
Frank Trapani well the traditional custodians were expert and they have been here 60000 yrs. and they did not sèem to clean... View
News 48

Ella Lloyd - 5 hours ago
They tried their best to lrotect protect tge the wildlife too! Best hse use indigenous knowledge via indigenous rangers to co... View
News 17

David Brown - 5 hours ago
I wonder if they will allow smoking? View
News 6

Margaret AndValdis Juskevics - 8 hours ago
Me too. Don't know why. Guess we feel tense and worn down View
show more show less
*Results are based on activity within last 7 days

UPDATE 9:00 am, January 24 Moruya is counting the cost this morning of yesterday's fire. Fire activity eased last night as...
News 60

The ACT Government is being urged to boost public transport services and staffing to meet extra demand caused by thousands...
News 67

A new 73-site caravan park near Exhibition Park will boost affordable tourist accommodation in the national capital and increase its...
News 60

@The_RiotACT @The_RiotACT
As fire activity drops slightly with cooler evening conditions, RFS crews will work through the night with heavy equipment to control the blaze ahead of forecast hot temperatures tomorrow https://t.co/XLc1gl5jw3 (1 hour ago)