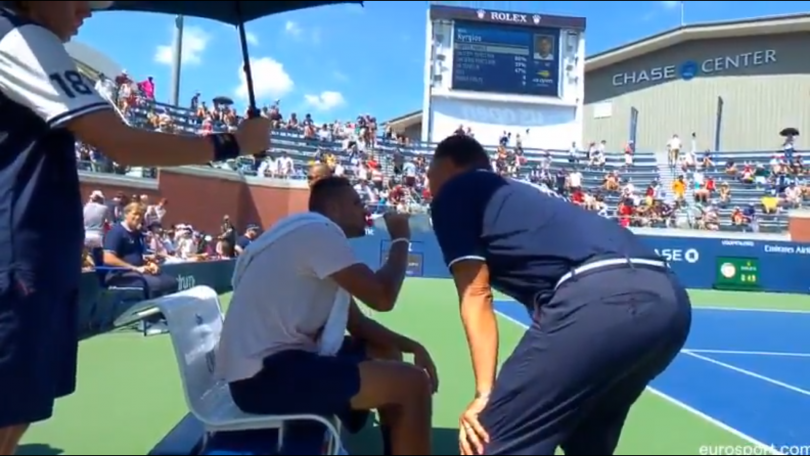 An umpire has come under fire for giving Nick Kyrgios a pep talk at the US Open. Screengrab from video shared across Twitter.

Lahyani has come under investigation for his controversial but seemingly well-intentioned intervention as Kyrgios looked like heading out of the US Open, down a set and trailing 3-0 in the second.

The chair umpire left his chair to persuade the Canberran to try in the match.

Kyrgios won the second set after a pep talk from the chair umpire Mo Lahyani.

A USTA rep told me it is already looking into Lahyani's conduct in this match.

The decision by umpire Mohamed Lahyani to counsel Kyrgios during his match with Herbert has raised questions and concerns and his pep talk has sparked an inquiry.

A statement released by US Open tournament referee said Lahyani stepped down from his chair because he could not “communicate effectively with Kyrgios” and to check if he was suffering from an injury or not.

US Open Statement from US Open Tournament Referee on the Nick Kyrgios vs. Pierre-Hugues Herbert Match pic.twitter.com/UHKPhVeYIb

Herbert later put out a statement, expressing his anger at Lahyani and his disappointment at the US Open statement.

“Nick from his side is not to blame as he did not ask for anything. But his behaviour and motivation on the court changed from this moment and then he dominated the match,” Herbert said.

“On the other hand, after seeing the video I am angry with the umpire. He should not go down from his chair and try to reason Nick. Did this action affect the game? We will never know…

“I am even more upset against the statement of the USTA that is clearly taking us for fools. We all hear on the video what the umpire said to Nick overpassing his function. Err is human but I still wait for an explanation.”

Kyrgios, though, insisted the conversation with Lahyani did not spark his fightback.

“It had no effect at all. I was three-love down, 5-2 down. Obviously, didn’t help at all,” he said. “He was just concerned about how I was playing, like, ‘Nick are you OK?’. Herbert let me back into that set. He should have just served it out. I stayed out here in the second set. I had no real choice.”

Regardless if it helped or not, the Canberran, who looked completely bored and disinterested at times, forced his way back into the contest. He clinched the second set tiebreaker to draw level and then break Herbert early in the third set to take command.

Kyrgios dropped a mere three games in the final two sets, sealing victory after two hours and 47 minutes and booking a third-round blockbuster with the five-time US Open champion Roger Federer.

Do you think the intervention from Swedish chair umpire Mohamed Lahyani was unfair? Tell us your thoughts below.

Bri Travalos - 5 hours ago
Meegan Ward grey nomads predominantly camp in free camps mate 😂 View
Julian Hayes - 9 hours ago
Yeah-nah.. the road into canberra isnt anything close to picturesque. View
James Logovik - 9 hours ago
I moved to Canberra last year and thought it was some kind of detention centre as well. Plant a hedge or trees around it and... View
News 13

Ian Gay - 9 hours ago
Jennifer Crawford we are everywhere! Join us! :-) View
Geoff Briggs - 9 hours ago
So when's the exception come into force when riding a motorcycle? How do two tied laws work for people in one country? View
pete056097 - 12 hours ago
There is arguments for and against bicycle helmets. Wearing a helmet should be a personal choice. https://crag.asn.au/the-myt... View
News 21