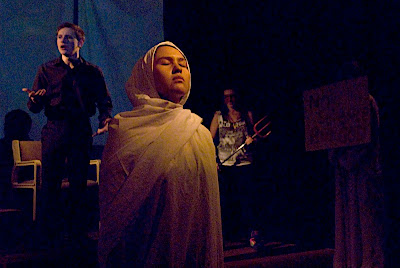 When attending the opening night of locally written and produced theatre there is always a sense of slight, well, unease.

Will this be a conceptual train wreck (with the music up too loud) that seemed like a good idea to the cast and author when they were stoned at 4am?

The opening sequences of Ich Bin Faust last night caused a few hearts in the audience to sink thinking we were going to get a series of adolescent pseudo-scientific expositions on the nature of reality which seemed profound in the immediate aftermath of raiding dad’s booze cabinet but don’t have much bearing on the real world.

And then BANG, like a fist to the face, we’re into the beautifully rendered drama and difficulties of real life.

This is a play that asks a lot of questions of the audience. Big, difficult questions. About our lives, and about what we’re willing to give up to get what we really want.

With a title invoking Faust it is, of course, about deals with the devil. But then it asks us what a devil really is? Especially poignant is one guise of a devil asking what the hell she’s really getting for all the hard work.

The cast is largely drawn from the Daramalan Theatre Company, in association with Shadow House PITS. (When performing a play about young people making the transition to adulthood it’s no bad thing to have actors who are actually in their late teens).

But fear not rabid atheists there is plenty in here for you too, there are reasons this isn’t being performed on school grounds.

One of the many overarching themes of Ich Bin Faust is the spectrum between rigid belief and self-actualised atheism (the Ich Bin, or I Am).

The performances are solid throughout. But the standouts, for mine, are Lucy Matthews as Jennifer, Ashleigh Walker as Adriana, Braiden Dunn as Eddie, and Jaclyn Hooper as Ms Gray.

Also special mention should be made to the delicate composition of RiotACT favourite Konrad Lenz, and the clever (nigh on subliminal) digital art design of Jo Howard.

Perhaps the most clever things about the whole business is the third take on the title. A Kennedy-esque cry of I am Faust, we are all Faust. Every day we’re making deals with devils and hoping we’ve checked the fine print.

If you like your drama wordy and crammed with high concepts, yet applicable to the world we all live in, then I recommend hitting the Canberra Theatre website and getting along yourself.

It’s on every night at 8pm up to and including this Saturday.

Brianna - 2 hours ago
Spiral, they selfishly put their customs, wants and needs ahead of everyone else. It looks like some of these people might be... View
rationalobserver - 13 hours ago
The Government (PM&C - statistical value of a life) has a number for that. Once the combined costs (economic, social and envi... View
rationalobserver - 13 hours ago
Actually, the data shows that the only domestic violence related increase we have seen was the noise from DV advocacy groups... View
Public Sector 16

Robyn Holder - 2 hours ago
When men stop wearing their ridiculous old fashioned suits and ties because they have no imagination the they can discuss it.... View
Angela Hunter - 14 hours ago
Could someone please tell the dept of Home Affairs that it's almost almost 2022. Next they'll be bringing back tea ladies and... View
Ally Ryan - 15 hours ago
Dresses are not allowed wtf View
Community 15

HiddenDragon - 4 hours ago
On the day it was announced, the jump in the ACT unemployment rate was being spun in the local media (presumably at the promp... View
News 22

brianf - 7 hours ago
All politicians, their staff and lobbyists should have been required to get tested and isolate for a fortnight before travell... View
Food & Wine 12

Jude Lou - 13 hours ago
Are there at least 10 layers? Wowww View
show more show less
*Results are based on activity within last 7 days

Families heading to the Tuggeranong mall to shop or have lunch froze in shock when a plumber allegedly tried to...
News 133

No train without the pain. The north had its share; now it's the south's turn. That's what Canberra drivers and...
Breaking 0

Motorists are being asked to avoid roads near the National Arboretum from 12:00 noon today (22 July) as police continue...
Community 15

Big families have spread the success of the Crokers across the Canberra-Goulburn region in wool and cattle breeding, real estate...
News 0

No train without the pain. The north had its share; now it's the south's turn. That's what Canberra drivers and...
News 133

@The_RiotACT @The_RiotACT
The @NatGalleryAus has recently revamped its Art Cases touring exhibition with new themes and new objects. Find out how you can bring this hands-own experience in contemporary art to your school or community.https://t.co/ksjuEaNhYv (42 minutes ago)

@The_RiotACT @The_RiotACT
Cup and Coaster in Fyshwick feels like coming home - and with an exciting menu that changes every two months, there are plenty of reasons to become a regular, as Michelle Taylor discovered https://t.co/97JbTzoSm2 (2 hours ago)

@The_RiotACT @The_RiotACT
AstraZeneca vaccination rates have "gone through the roof" in NSW according to Premier Gladys Berejiklian, but young people in the ACT aren't as eager to line up for the AZ jab https://t.co/zuBSm0cCBh (3 hours ago)