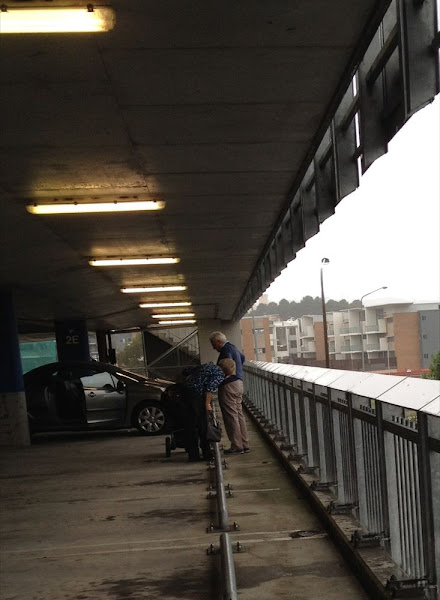 Curious happenings at Westfield Woden. As I parked, some bogans (2 mothers with kids and some rough looking bloke) returned to their 4WD with a pair of prams, swearing at one another about some disagreement. When I returned, they were gone but one of the prams remained. Did they forget? Or was it broken and dumped?

It got stranger though, a couple of minutes later an older woman in a Pergeot returned to her car nearby and was greeted by an older gentleman who drove up in a red commodore. They talked, then went over and inspected the pram (pictured). One questioned if it was too big for a car? They basically tore it apart looming in every crevice and pocket, then after 5mins she left. The older man then wheeled it away to his car, opened his car, then after looking, wheeled the pram away. Good Samaritan or looking for a freebie?

Look at those ugly apartments in the distance.

As opposed to the lovely vista of the concrete car park in the foreground?

Look at those ugly apartments in the distance.

It’s definitely a freebie for the oldies. If it’s one thing I’ve learnt, you CANNOT get between oldies and anything free, irrespective of whether it is appropriate for them or not.

I rest my case.

The oldies were probably looking for something with some identification on it, and upon finding none figured they would take it to the police station.

Spying jokes aside, who leaves something assumedly expensive and valuable in a carpark and who then sees it and walks off with it?

Spying jokes aside, who leaves something assumedly expensive and valuable in a carpark and who then sees it and walks off with it?

There was a saying in the military; “Gear adrift, must be a gift.”

I’m not the author!

Geez John, don’t you know anything? Clearly this is a very clever spy game. You’ve just witnessed a carefully concealed drop. Since you snapped pics of people who officially Do Not Exist(tm), you should expect attack choppers any minute now. Stay calm and let the hooks do their work.

…or maybe a drug deal.

Kerryn Price - 2 hours ago
Never had a problem. View
Pari Gilmour - 4 hours ago
I think we are less cliquey but also less friendly. That is the beauty of a country town. Smiling and giving kindness, help a... View
Alison Brittliff - 4 hours ago
Yes and no, in a day to day bau I’d say yes, but when adversity or tragedy befalls one of our own we show our heart and com... View
Opinion 205

Graham Zalewska-moon - 3 hours ago
Jan 26 was selected as Australia Day (and is the date that the necessary legislation was passed by Parliament declaring that... View
News 8

Teena Brady - 3 hours ago
Does it matter. My ex got 4 weeks for 23 family violence breaches...... View
Don Rail - 5 hours ago
ACT????? View
Jason Ezra - 5 hours ago
Lobby your elected representatives to change the law to bring the requirements into line with every other jurisdiction. View
News 10

Antony Burnham - 4 hours ago
surely they are to be contrasted with passive transport trips, i.e. falling asleep on the bus and missing your stop View
Craig McPherson - 11 hours ago
Tristan Melhuish oh yes, and hey I get this language from government - bureaucracy at its finest - but from a journalist - su... View
Tristan Melhuish - 12 hours ago
Craig McPherson or signalising an intersection when they are installing traffic lights? 😂 View
Opinion 42

Greer Brennan - 7 hours ago
Ohhh some more food for thought View
Maria Greene - 9 hours ago
We went to one in Melbourne and the food was terrible and service weird. They may have difficulty getting staff during covid View
Carmel McDonell - 10 hours ago
Thai Herb -second that!!! View
show more show less
*Results are based on activity within last 7 days

I don't know about you, but I appreciate art because it's pretty. And because someone worked hard to make it...
Community 48

“It all went crazy”: Goulburn truckie keeps his cool during COVID-19 pandemic

UPDATED: ‘Shameless thief’ picked the wrong person to steal a bike from

First of a generation, Spiro Pazios has made his own way

@The_RiotACT @The_RiotACT
January is wrapping up, but there’s still plenty to see and do in Canberra over the coming week https://t.co/yDyCfOctiv (6 hours ago)

@The_RiotACT @The_RiotACT
Geocon has given ground but the YMCA will still oppose a 14-storey development next door to its Gungahlin childcare centre https://t.co/AfdmfRnk2z (8 hours ago)