Finishing up the series of pictures Danman took out and about the weekend before last, we have a scene from All Saints Church in Ainslie worthy of an Omen movie. 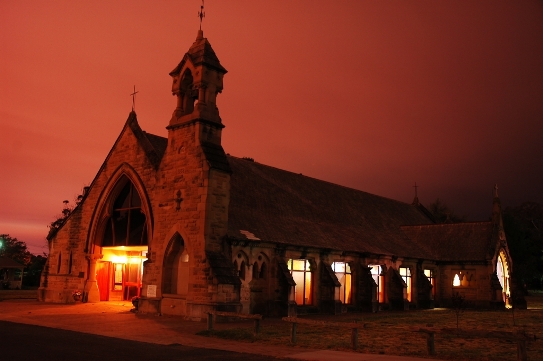 Just got in email some guys going around stabbing solitary people on the weekend nights – while mugging them. Usually stabbed in the cheek.

Not too cool for me carting about 2100 buxx worth of camera gear around.

Ill have to get security.

Kudos to all for re-igniting their love of photography (both viewing and taking) – play safe.

Probably do more in the new year – but ill predominantly be in melbourne or busy.

Actually, the more I look at it, the more it is a superb photograph.

you’ve driven me to dust off the ol’ canon A1 danman. thankyou.

And to the others, thanks for the info as to it’s history – very interesting!

It was dismantled in Sydney, brick by brick, and brought to Canberra by truck and rebuilt as a church.

good on you danman – a terrific photo. more please.

Gertrude asked that the following be known:

“You may be interested to know that you can see a surviving Mortuary Station on the way into Central Railway Station in Sydney. Look out the left hand side as you leave Redfern. It is called Regent Street, is only used for special occasions (Yule Fest on a steam-train type things) and is apparently built to the same specs as the one formerly at Rookwood, now All Saints.”

The roof burnt down and it was left derelict for a while so it was bought by a Canberra cleryman. He labelled every single brick and then shipped it down here where it was rebuilt.

im sorry but i just have to ask… how on earth did they move the church from Sydney? did they dismantle and rebuild it??? Ive been to a wedding at all saints and the plaque did not say how the heck its was transported over!

Train to the soup kitchens?

It’s made from people!

NO filtesr – white balance on automatic – ambient light reflected of smoke and clouds.

Hope everyone enjoys.
ps. aopparently a few ghosts came to canberra with this building.

Wikipedia rox. And it seems we’ve got an awesome-looking river styx boathouse.

Who could ask for more?

Rookwood Cemetery (officially named The Necropolis and named when it opened as The Necropolis, Haslams Creek.) is the largest multicultural necropolis in the Southern Hemisphere, close to Lidcombe Station in Sydney, Australia, about 15 kilometres west of the Sydney City central business district.

The first burial took place in 1867, following the closure of the Devonshire Street Cemetery, and the Cemetery remains operational. In the past the Cemetery was served by a branch railway line with 4 separate Mortuary Stations. Regular bus services within the Cemetery have replaced the line. Rookwood Cemetery is one of the best and largest surviving examples of a Victorian cemetery in the world.

The name Rookwood came some 20 years after the establishment of the necropolis, it was a means to differentiate the local village of Haslams Creek from the association of the burial ground, the village changed its name to Rookwood, and naturally the cemetery was soon known as Rookwood, the village changed its name again in the early 20th Century to “Lidcombe” (a combination of two Mayors names, Lidbury and Larcombe – Larcombe was also a Monumental Stone Mason). The cemetery retained the name Rookwood.

Rookwood is most likely an accidental or deliberate corruption of the name Brookwood Cemetery and its associated railway station. At the time of Rookwood’s opening Brookwood Cemetery, located in Brookwood, Surrey, England, was one of the largest cemeteries in the world. It is less likely, however far more romantic that, as claimed by some sources, Rookwood was named after William Harrison Ainsworth’s novel Rookwood, written in 1834.

The building which served as a railway station for Rookwood Cemetery between 1867 and 1948 was moved to Canberra in 1957 and became the All Saints Church, Canberra.

For the soup Kitchens?

To the grave sites. Rookwood cemetary is enormous. Seriously enormous. If you google earth it you will see the huge expanse it takes up.

BTW, it’s kind of near the Olympic stadium.

Why would it transport bodies FROM the cemetary?

When it was at Rookwood it was a train station, well, of sorts. It was used to transport the bodies to and from the cemetary.

Shirley Troy - less than 1 second ago
Hope the strengths of community spirit ,awareness and support continue when this Crisis is over. View
Scott Bowen - 10 hours ago
This is amazing news! View
Anne Atherton - 18 hours ago
Love our community spirit View
Property 46

Rauny Worm - 15 hours ago
Tom Porter ..there is a youth specific faculty but only for emergency treatment not for therapy. There are still so many gaps... View
News 6

Jacqui Donegan - 16 hours ago
Cooleman Court could (again) be a wonderful local precinct ... but it’s a mess - no parking, scrappy streetscaping, and a s... View
Angela Davey - 19 hours ago
Why not open shops in Coombs. Wright Denman Prospect before building more car parks. View
News 9

Conrado Pengilley - 16 hours ago
And how big is your risk fund on your investment property? View
Ashley Latimer - 1 day ago
Imagine investing in property and not having a risk fund set up lmao View
News 35

Chris Kubank - 19 hours ago
Lauren Ogden well said View
Randy Goldberg - 1 day ago
Domenic Fabbo three to six months or more. Basically, it'll be in place (if not stronger measures) until there is a working v... View
Lauren Ogden - 1 day ago
It is a shame that these stories are provoking aggressive reactions when we could be working together as a community. "One st... View
News 18