Images of Canberra – The class of summernats

Roger Ramjet was very keen that we share his summernats photography. 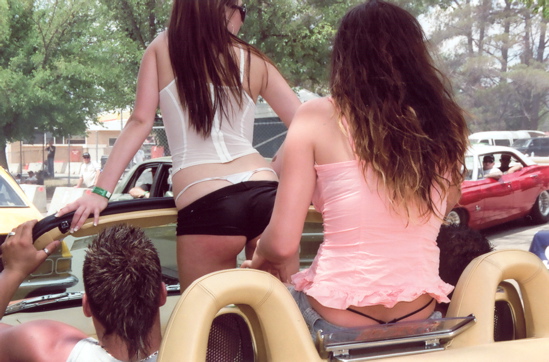 In the interests of equality, gay men or straight women are encouraged to send in any Canberra beefcake they might come across.

Just call me Dr RAMjet. Need ramming??
I’m done too. I’m building an event calander to count down till next Summernats!!
seeya
RR

Roger, are you of the medical profession? I can assume you are not with your inability to even spell a simple screen name correctly. So why should I take any form of physical advice from you?

I think if anybody around here needs a good “pumping” I believe it is you. I don’t feel the need to oogle young girls breasts and insist on their behinds being shown on a website. I think perhaps you havent even seen breasts in a while. You must have made your wife pretty mad. Maybe the cleaning is her venting her frustrations of not being “pumped”?

Now, go and look at your pictures some more and grab another box of tissues.

Im done with this topic.

Not just us, RR, most of the whole goddamn (enslaved)male population!

But I console myself with the adage: “most men lead lives of quiet desperation”!

Like at this very moment the cow decides to do the vacuuming (probably because she’s annoyed that I’m not sitting there ready, willing and able to take orders)but she has all week to do the f…ing vacuuming (she doesn’t work).

As the two parts of the species age, the male becomes sweet and amiable (like, check out my posts) whereas the female becomes a …harridan!

As for the fair schmerica, she’s got a sense of humour, which is highly unusual for a female, they take themselves so seriously! Deep down, I think she’s a good sport! As for that lalucha cha!cha!cha! Well, that’s another story!

Chin up! Perhaps the Internet chatroom is the new …shed?

Wow Luca,
we are living very similar lives. “There’s house-work to be done”, “I’m going to give that computer away”. blah blah blah.

P.S. Smerica sounds like she just needs a hard….um…….session. Pump out that built-up stress and frustration girl. 🙂

Yeah, missusses are like that. Mines sitting over on the couch scowling because she says the computer heats up the room but really she’s just pissed off because I’m amusing myself!

Any moment now she’ll squawk ” you’ve got time to f..k about on that f..king computer but when I want you to … oh you don’t have time”.

Very controlling things, females.I tried to warn Hannibal but … he just thinks they are all quiet and submissive! Boy is he in for a shock!

‘Wouldn’t be able to play guitar….’

Ah so when you ask “In the interests of equality, gay men or straight women are encouraged to send in any Canberra beefcake they might come across” we can all behave like grown-ups and not go “Gwarrrr!!!!” right?

My missus would cast a spell on me and turn me into a newt.

Admittedly, I’d be better looking but I would be able to play guitar, or sing…

For god’s sake, Pandy, can’t you play hard to get! Everytime some woman shows an interest in you, you’re panting for her photo! Be cool, man! Try and find out if you have something in common – like flatulence!

Gentlemen, can we tone down the sleazy neediness?

Summernats is but a year away if that’s the sort of thing you’re after.

Schmerica I want pictures of you now!

I think he needs glasses if he think’s I’m blonde.

Last time you said it was her blonde hair!

Aparently its the first three letters of my online screen name that gets males attention.

I am attracted to the “Sch” part of her name. It means she is the quiet type.

Pandy, I have no idea. You would have to ask them.

Hasdrub, I may call you that? Slappers are fun, but that’s about it….

There’s a lot of sex appeal in there, Pandy!

Acton - 59 minutes ago
This is not the first time defence personnel have been caught mishandling classified material, but the harsh circumstances of... View
Spiral - 1 hour ago
"“J” has well-grounded fears that he might be targeted by foreign intelligence agencies" That certainly sounds like he ha... View
News 36

Julie Macklin - 2 hours ago
James Dof, I take the train, because I like the train much more than the bus. I can get get up and move around, plus there's... View
James Dof - 15 hours ago
I take the bus to get to the bus terminal with luggage and like I said it's 45 mins to civic and an hour less travel on the b... View
Julie Macklin - 15 hours ago
James Dof A bus every 15 minutes from Civic. In practice thought I imagine most people, even if there is a regular bus from w... View
News 27

Trish Roberts - 2 hours ago
Yes. Does not want to hear the opinion of older people. Well, one day, if he’s lucky enough, he’ll get old, too!... View
News 8

nigefromfarrah - 3 hours ago
Constructing the city to lake project was a labour commitment at the 2016 election. They won, enough debate, get on with it.... View
Property 8

nigefromfarrah - 3 hours ago
Sorry but No part of this will be affordable !! View
Best of Canberra 139

rhona1212 - 4 hours ago
I would like to recommend Canberra Blocked Drains Services for not disappointing us. Two plumbers came before them but failed... View
Business 4

Vanessa Schultz - 7 hours ago
Too young, and always a happy football mad kid, I grew up across the road in Hopetoun Circuit Yarralumla from the McInnes RIP View
Carol Jean - 17 hours ago
So sad, a true gentleman View
Stephen Keir - 20 hours ago
Sad news Always polite and genuine. View
Opinion 48

Sylvia Brooker - 22 hours ago
Thanks Leong kitchen, you will be missed by many. All the best for the future. View
Property 5

Felicity Copeland - 23 hours ago
Maryanne he remembers! View
show more show less
*Results are based on activity within last 7 days

@The_RiotACT @The_RiotACT
The University of Canberra Capitals are looking forward to the 2020-2021 season as the WNBL announces its schedule that will commence in November. The Capitals won the championship last season and can now begin preparations for their title defence https://t.co/ExPFO2NiEh (1 hour ago)

@The_RiotACT @The_RiotACT
“Witness J” speaks to Genevieve Jacobs about being incarcerated with Canberra’s sex offenders, his anger and his fears about our nation’s growing secrecy https://t.co/0X7XNZbVN4 (2 hours ago)

@The_RiotACT @The_RiotACT
The Raiders marked Josh Papalii's 200th game with the Green Machine with a 22-6 win over the Storm in Melbourne. It's the Raider's best season start in 15 years and already has fans dreaming that Ricky's men can go one better in 2020 https://t.co/v64nqFaA2Q (3 hours ago)