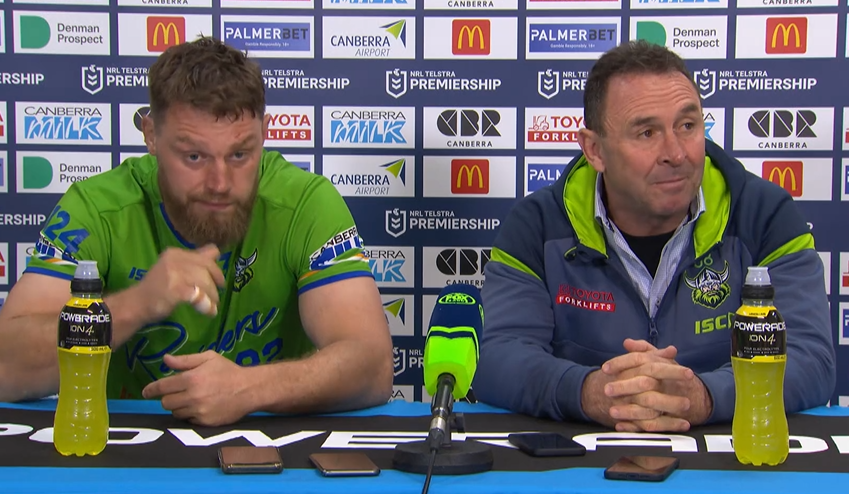 Ricky Stuart in the fateful post-game press conference that cost him a one-match suspension and fine. Photo: Screenshot.

Having spent many hours in NRL post-game press conferences, I can tell you they can be as joyous as a tooth extraction.

Yesterday (9 August), coach Ricky Stuart found out the hard way how costly they can be, with the NRL banning him from coaching the Canberra Raiders this weekend, slapping him with a one-week suspension and a $25,000 fine for his post-match outburst about Penrith’s Jaeman Salmon.

With so much at stake, emotions are, more often than not, running high after a game. This is especially so with a losing coach. In most cases, these coaches would rather be anywhere else.

Press conferences with a losing coach are usually highlighted by journalists nervously looking at the floor with the coach and player shuffling in their seats waiting for the first question.

Frequently there are moments of uncomfortable silence before the first question is asked.

Regularly it’s a full toss, with questions like, ‘what did the coach think of the performance of the team?’ before expanding onto other topics.

Potential curve balls occur when a journalist asks what the losing coach thought about the refereeing during the game.

The coach, preferring not to be faced with a fine, often fires a question back at the journalist, asking them what they thought.

By this stage, it has become exceedingly uncomfortable and the response from the journalist is usually a nervous one.

I have been on the end of many an uncomfortable exchange with a losing coach and it can play on your mind for days.

It is not an experience I miss.

Before Super League and the introduction of set media conferences and media managers with each team, it was pretty much a ‘free for all’ in the dressing rooms.

I vividly remember trying to find a coach from a losing side for an interview who hid in the bathroom until the media had given up waiting for him.

These days, it is far more staged.

Under the NRL rules, both the winning and losing coaches, as well as a player from both teams, need to be in attendance in a room separate from the change rooms with sponsors’ signs as the backdrop. 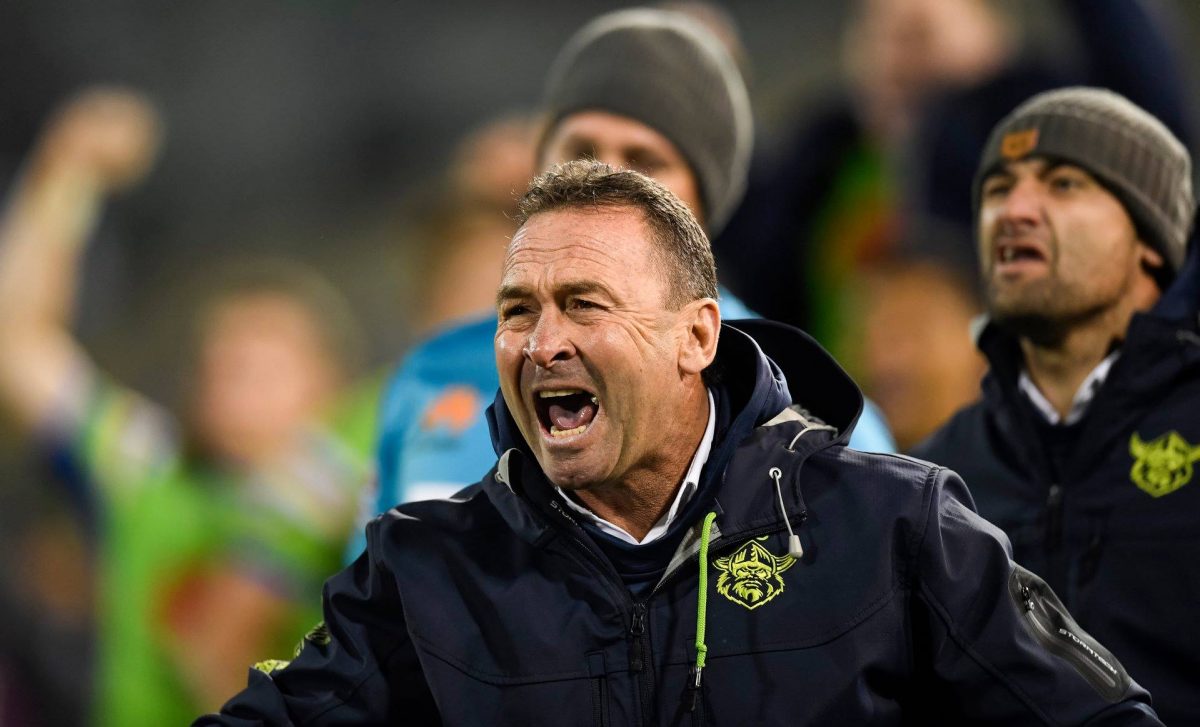 Ricky Stuart: he can get a little passionate. Photo: File.

In the AFL they have become a featured event, which is televised live with the journalists often becoming the feature, not the coaches, as they spar back and forth.

There is less of this in the NRL.

In NRL media conferences, apart from the odd outburst as we saw with Ricky Stuart on the weekend, the whole event can be reasonably sterile in terms of newsworthiness.

The likelihood is that coaches will say one thing in a press conference and another to the players in the sanctity of the dressing room.

This is why I question the worth of the post-media conference involving the losing coaches. They are on a hiding to nothing.

Like someone said already, give them time to cool off before question time.

I keep saying stop having these stupid post game interviews. I believe the NRL set up these coaches and players so they do blow up and then the NRL gets the money from the fines. Most of the questions asked are stupid and of no value. Everyone watched the game they don’t need a blow by blow post match question and answer. The NRL don’t protect the coaches from idiotic questions or questions that don’t relate to the game. At least give them more time to compose themselves. Stewart isn’t the only one that gets baited.

I think they’re pretty pointless and rarely watch them myself (I find watching rugby league on Channel 9 painful enough and switch off the moment the siren goes) but at the end of the day the broadcaster demands it, and they’re the ones who pay the bills which enables the coaches’ million dollar salaries. Don’t like it, get it negotiated out of the broadcast contract and be prepared to get less money and lower salaries. Still don’t like it, go coach local footy for peanuts.

The question is why does he not get harsher penalties for all his dummy spits which attempt to cover up how poor the Raiders are?

Ricky does tend to say exactly what he thinks. I find his honesty refreshing but sometimes cringe worthy.

Unfortunately his comments were considered out of place and he got punished for them while Jaeman Salmon got off lightly in comparison for what I’m lead to believe may have been assault.

The coaches may need some coaching before they are put in front of the media. Sending the assistant coach in if they think the coach is going to go off could also be a way to mitigate these unfortunate situations.

Or is it a case of the media machine loving these situations? Ricky was certainly newsworthy a few days ago.

They are not needed. Would love to know the ratings for a press conference alone. How many people tun off after the game finishes?

Tim , you raise a very good point and one worthy of discussion. I agree with many of your sentiments including the discomfort factor for coaches and journalists alike but what is the alternative? There is always a good degree of interest in post match comment, always has been and always will be. Do we want to go back to the days of dragging camera operators into the dressing rooms, through a sea of bodies in various stages of undress, trying to find a player or coach willing to talk. Post match pressers are part and parcel of every major sport in the world. Should rugby league be different?

I get the ‘need’ for these post game conferences and the media interest in coach & players thoughts etc. post game. I do however question how appropriate it is to conduct these immediately following the game. Particularly if the game was heightened or heated in anyway. The coaches and players are all humans, with feelings and emotions. Sticking a microphone in anyone’s face asking loaded questions whilst they are in a heightened emotional state is just asking for trouble. Surely these things could wait for the following morning, once those involved have had a chance to cool off and process the game.

The cynic in me half wonders if the timing is deliberate to bait coaches and players into saying something wrong so the NRL can top up their coffers with fine money & media outlets can increase revenue on the back of ‘scandal’.

This specific incident is the perfect example. Whilst I don’t necessarily agree with Ricky’s post match comments, I can understand where they came from, and imagine given time to cool off before hand he wouldn’t have made them. Coaches and support staff develop a relationship and bond with their team/athletes. They care about them, and when their players/athletes are wronged in a game/match/competition they take it personally and are upset/frustrated/angry for their athlete. Ricky is no different, watching one of players kicked in the groin (a dog act) and then kicked in the face is inevitably going to get him fired up. Add to that the perpetrator of this act is someone who had caused serious upset to his (at the time) 12 year old son. No father is going to forget seeing their child devastated and distraught (no idea of what exactly Salmon did to his son, but not really the point). With all of this taken into account, Ricky was understandably furious at what occurred on field. Then they stick a bunch of microphones in his face, asking loaded questions seeking the best possible sound bite, what on earth did anyone expect?! I get that as a ‘public personality’ and ‘representative’ he needs to be held to a higher standard, and has been punished as a result.

But, this could happen to anyone, any human!! Give the coaches and players time to process & cool off, then hold your media conference. I can guarantee all these former players etc. slagging off Ricky would have said similar or worse off camera in their time. But I guess it’s easier to sit back and judge the imperfections of another, and ignore your own

Given that Ricky’s post match comments were unacceptable, does it follow that kicking an opponent in the groin is acceptable in Rugby League?

Most sports have them and they’re usually not an issue. These people get paid for the most part because of the money in televising the sport, so it makes sense that people want to hear what those responsible (captain/coach etc) have to say about the team’s performance. And if someone can’t get up in front of the media without putting their foot in their mouth then maybe they need some more development opportunities before being in a leadership role.

They are so awkward and have never been necessary 😬