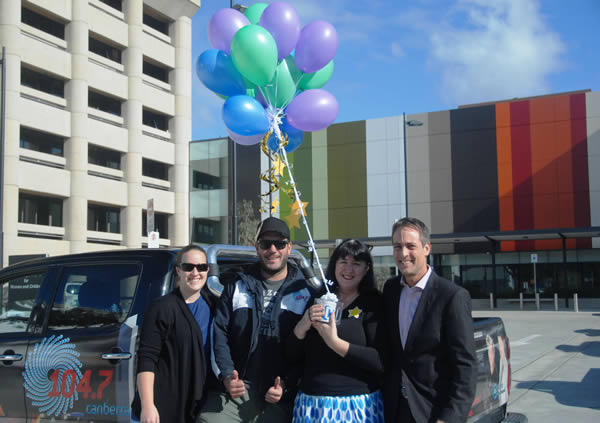 Independent Property Group yesterday recognised the efforts and achievements of one local star with the culmination of their latest Change Reaction charitable initiative.

Representatives from Independent and FM104.7 surprised Suzanne Tunks at the Centenary Hospital for Women and Children, where she was presented with the title of “Community Hero”.

Suzanne nominated The Stella Bella Little Stars Foundation, which she launched in 2012, to receive a $20,000 donation from the Independent Property Group Foundation.

The Stella Bella Little Stars Foundation aims to brighten the lives of children in the ACT region who are living with serious and long term illnesses.

Suzanne’s daughter Stella was born with congenital heart disease, and in her short 9 month life, Suzanne spent half of it with her in hospital and the other half caring for her at home in palliative care.

This was the Foundation’s fourth Change Reaction campaign, where Canberrans are encouraged to nominate and vote for individuals who are actively involved in helping the community as their “Community Hero”. More than 8,000 votes were received for the campaign and 15 amazing people were nominated.

John Minns, Independent’s Chief Operations Officer, said “All of us at Independent continue to be extremely humbled by some of the stories we hear during the Change Reaction campaigns. There are so many amazing Canberrans that work quietly behind the scenes helping people who are dealing with many challenges on a daily basis.”

“We are delighted that our donation will be used to assist in any way with the burden that is placed on families with children who have a serious or long term illness.”

Further details on Independent’s Change Reaction can be found at http://www.independent.com.au/changereaction or on their Facebook page www.facebook.com/IndependentPropertyGroup.

Dee Kaden - 9 minutes ago
That could almost be 5,400 homeless off the streets!!! View
Slim Hunter - 2 hours ago
Natives or weeds that require watering?🤔 View
Jim Andrews - 4 hours ago
Nathan Burraston With respect my friend, you dont know what you are talking about. First up you cant just plant a tree anywhe... View
Lifestyle 24

Jim Webb - 13 minutes ago
Looking forward when it reopens. 2019 image View
Di Green - 59 minutes ago
I so enjoy these gardens View
Vee Bee - 4 hours ago
We miss it so much :( View
Community 32

Chris Davis - 15 minutes ago
Hope they check out how Narooma runs it View
Steph Hamleed - 29 minutes ago
Melanie Leedham bring the kids to this View
Acton - 1 hour ago
In 1992, a shipping container of 28,000 rubber ducks fell overboard on its way from Hong Kong to the United States. Carried b... View
News 17

Sam Oak - 28 minutes ago
Wrong, even with no restrictions the death toll from covid would still be less than the flu. That’s because people naturall... View
MERC600 - 53 minutes ago
Well had a quick look at this, a heap of possible dates and possible openings and possible closings ( if it goes backwards ).... View
Capital Retro - 1 hour ago
Facts have nothing to do with politics. View
Opinion 45

@The_RiotACT @The_RiotACT
Got an incredible idea for a #startup that will change the world? The @CBR_IN and @MeyerVandenberg say getting legal advice early can save you a whole lot of pain down the track https://t.co/P9C9WvzEpN (34 minutes ago)