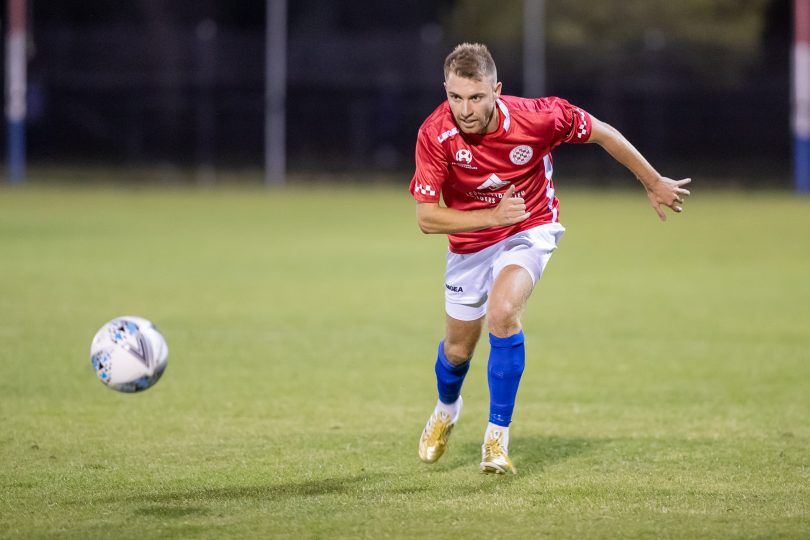 Canberra FC’s coach believes the side have turned their poor start to the season around. Photo: Michael Daniel Photography.

Walking into the shed’s two-nil down to last season’s wooden spooners, Canberra FC’s premiership hangover looked destined to turn into a full-blown migraine.

Coming off the back of consecutive three-nil losses to Canberra Olympic and Tuggeranong United to start their 2019 NPL1 season, the club was in an unenviable position.

Having not scored for five halves of football would concern some coaches, but not new head coach Luka Ujdur. Pacing the floor of the new changerooms at Riverside Stadium, Ujdur didn’t need to shout. He didn’t need a whiteboard.

He knew exactly what to say, and so he began a “proactive and positive” discussion with his disheartened players.

“There were one or two small errors and we get punished in the first half. Normally things like that wouldn’t hurt us too much but when you are coming off a two-game losing streak, the little things start to add up and compound and cause some confidence issues.

FREE-KICK |This set piece from Daniel Colbertaldo drew Canberra FC NPL level as they completed a second half comeback to defeat Monaro 4-2 at Riverside. #NPLCF #MPFCvCFC

“To be honest, I wasn’t too concerned about us not scoring. I knew we have the ability to create lots of chances and scoring would come.”

Whatever Ujdur said worked; the side ran over the top of Monaro, scoring four unanswered goals to claim their first win of the season. The head coach even conceded that he started to question himself when the Monaro scored their second before the half time whistle.

“The boys reacted well and they showed what they can do and how they can play,” he said. “We just came out with a desire and determination, that we weren’t going to let another 3-0 loss happen.

“These are experiences that have made us stronger and the team is like a slingshot; the tension is there and when the boys release the tension, we are going to be a formidable side.

“They just needed a little kick for it to happen.” 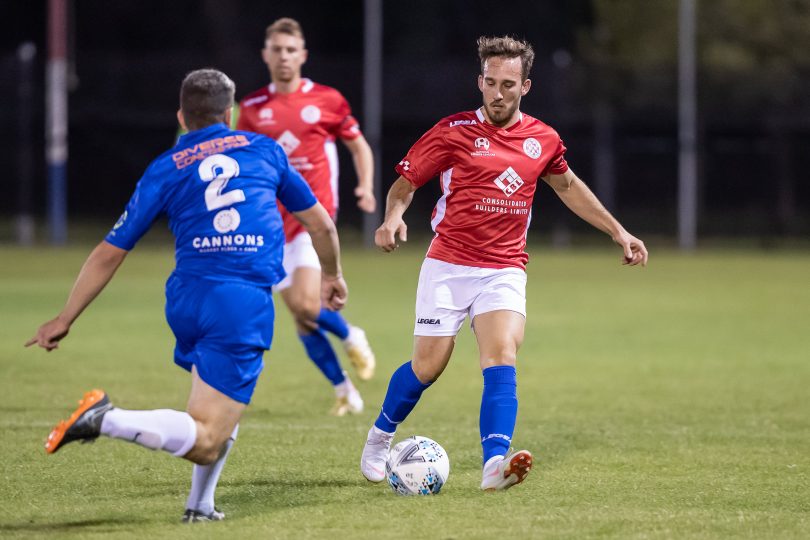 Ujdur is the first to admit there are a few things he is trying to implement that are different from last year that are taking a little bit longer than he expected, and their slow start to the season was the price they had to pay for it.

The former Canberra Olympic assistant believes his side started to improve since their devastating loss to his former side to start the season.

“The confidence was extremely high and Olympic shut us down,” he shared. “Olympic did us a massive favour because we took some good things away from that loss.

“Sometimes you have to lose to win because it’s not a sprint, its a marathon.

“I guarantee that we will be near the top at the end of the season.”

George Watling - 48 minutes ago
These multi title trojan horses are cropping up all over Canberra. Developers are trying it on in Holder and Weston and other... View
News 45

Shane Westmore - 54 minutes ago
Absolutely. There’s people voting now who are completely misinformed about anything going on in this country & waste their... View
Nada Krstin - 3 hours ago
oops, meant to say, cannot have it one way! :)... View
Nada Krstin - 3 hours ago
No. And if you think they are mature enough to vote at 16 or 17, then they should be tried for any crimes as adults as well,... View
Opinion 94