Intellectual Self Defence – definitely on 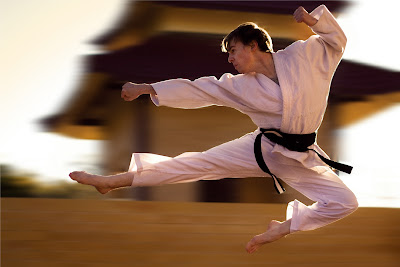 After a minor kerfuffle of which we shall speak no more “Intellectual Self Defence” is definitely being taught at Questacon as part of National Science Week.

There’s a media release which states among other things:

Kung Fu and critical thought will come head to head in the quirky science show Intellectual Self Defence, to be held at Questacon as a part of National Science Week in August.

Intellectual Self Defence is a fun, interactive show that will teach an audience how to think critically and evaluate scientific evidence. It will use a 70’s kung fu movie style to feature topics such as evolution, climate change, the scientific method and alternative medicine. The show has been in development since January, when Alison McGregor, Joel Barcham, Alex Jordan and Daniel McCusker received $14 550 from the Australian Government’s SCOPE program to present the show as a part of National Science Week.

The show follows the adventures of Johnny Brainfist, master of the
Truthful Lotus style as he fights against the Cobra Lai dojo of Bad-Fu. ‘The 70’s Kung Fu movie stuff really lends itself to the show, and keeps everything light and fun’ writer Joel Barcham says about the show’s irreverent style. ‘We chose it because it is so over the top and allows us to create a real Hero’s journey. There are good guys, bad guys, lots of movement and action – all of this adds interest to what could otherwise have been a fairly dull, text-heavy show. We also liked the idea of tying it in with defence – defending your ideas, and the martial arts as a form of physical defence.’

This sounds like a great idea to me – critical thinking is in short supply these days.

Charny Barney - 3 minutes ago
The Progressives are also dodgy, telling people they support light rail yet their Yerrabi candidate Mike Stelzig tells people... View
Charny Barney - 4 minutes ago
Alistair is loose with his language, and with what he really plans to do. He clearly has ultra conservative positions that un... View
JS9 - 13 minutes ago
They are promos about the election coverage, not campaign ads from the parties... You truly talk some tripe sometimes.... View
News 5

Beth Sheargold - 46 minutes ago
Lina Haines I’ll have to see what I can do! View
Lina Haines - 8 hours ago
Beth Sheargold is like a review of Clementine Bakery please! View
Donna Butler - 10 hours ago
Lizzy Edwards and a catch up with meeeeee View
Community 16

Kosher Ayatollah - 54 minutes ago
Robson Rotation is why we need so many corflutes. Candidates are fighting within their own parties for recognition, not the p... View
Business 3

Nicole Vassallo - 8 hours ago
Laura yes exactly!! Lovely family that owns and built this place, and such a stunning home... 😍 View
Laura Peppas - 9 hours ago
Nicole your neighbours? 😱😍... View
show more show less
*Results are based on activity within last 7 days