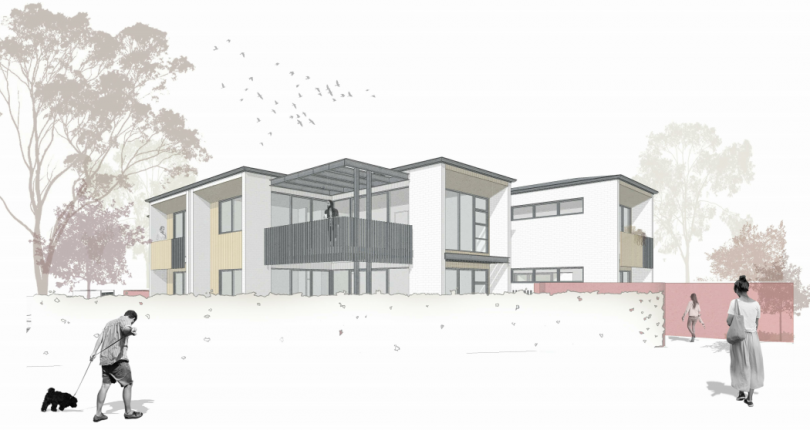 The proposed Manor House in Griffith: will look like one home but really be four. Image: Rob Henry Architects.

It may be hard for many to give a toss about yet another planning row in leafy Griffith in the inner south, as privileged an enclave as there is in Canberra, but there are wider ramifications at stake that may mean your suburban patch ends up denser and more crowded.

The owners want to bulldoze their single residence and replace it with a two-storey, four-unit complex with nine car parks.

But don’t call it a block of flats because it is designed to look like a single residence and fit in with the Griffith urban landscape.

The only problem is the area is zoned RZ1 for low-rise, low-density housing and a one-off change to the planning rules, Draft Variation 375, is required for the project to proceed.

As you’d expect, local community groups are incensed, calling it the thin edge of the wedge and a precedent that will see the neighbourhood turned into Swiss cheese for developers.

The project has a history going back more than a couple of years, and with one of the owners being an ACT public servant in the City Renewal Authority, it also required a conflict of interest hurdle to be cleared.

No one is suggesting any impropriety throughout the application process, but the fact that an RZ1 property in an area where densification is a hotly contested issue was cleared to be part of the Demonstration Housing Project, and is now at the point of changing the rules to accommodate it, raises questions.

Apparently, the Manor House model is common in NSW, so why it can’t be studied in that setting is a mystery.

One may give it a fancy or more acceptable name, but it is not a house. If the government wants to see how it would work in Canberra, it should be developed in a more appropriate RZ2 zone where medium-density multi-unit development is allowed.

The planning system may be broken, as Chief Planner Ben Ponton has admitted, but a one-off exemption for a single project like this shows contempt for the rules that we still have to adhere to and does set a precedent.

Many a DA point to developments of a similar nature nearby to justify their size.

If this project proceeds, what is to stop similar ones popping up in single residential areas across Canberra, changing the character of neighbourhoods, adding to traffic and possibly reducing property values, unless, of course, they can also be redeveloped?

READ ALSO Is it worth adding a battery to your home’s solar system?

No doubt for landowners and developers, there is a strong business case for converting a single home into four.

And when Canberra needs more homes, particularly closer to the city, the Manor House model is possibly less offensive and sits well with the government’s infill policy.

There is nothing wrong with exploring different housing models – especially what’s called the ‘missing middle’ of low-rise, medium-density – but they need to be in the right place, with the right zoning and not chip away at what is left of the planning system’s integrity.

With the vaunted planning review still years away from completion, the government shouldn’t be messing with the system like this.

These multi title trojan horses are cropping up all over Canberra. Developers are trying it on in Holder and Weston and other locations. Its the same sale pitch and stick. Poor owner try to better life for themselves, prospective home buyers, and the community yadda yadda. Held back by planning rules yadda yadda yadda. These aren’t one offs they are a series of coordinated efforts to undermine the planning laws that protect home owners and their families from over development. https://www.facebook.com/westoncreekcommunitycouncil/posts/1574255379440012

Why are we so desperate to lose the benefits of our garden suburbs to densification? The communities and residents value the character of these inner suburbs. It’s the key reason why they live there. The important features of this desired character include the low rise, the block size that allows gardens and trees, the streetscapes that are broad and breathe. These landscapes are human and environmentally sensitive. Remember Canberra was the Garden City.

Ben Ponton is right that the planning system is broken. Interpretation of the criteria and rules is now to maximise the number of dwellings on a block, building from boundary to boundary, as many stories as allowable and no room for trees, gardens or play. This is a planning regime that has produced the hottest suburbs in Canberra. Allows residential developments on community facilities land.

Manor House is not new or innovative Planning. It’s bringing the poor design of some of the new suburbs into the old. If it’s not broken leave it alone. We don’t have to change the old into the new. Cherish the difference. We might learn something. If you want to see the impact of slipping RZ2 into RZ1 go for a wander around Hope St/Stockdale St Dickson. O’Connor/Turner. Take a walk because it’s now hard to drive down some of these streets.

“The communities and residents value the character of these inner suburbs. It’s the key reason why they live there.”

You missed a key part of this. The “existing” residents value these things because they significantly benefit from them both financially and through high access to services and public amenities.

However, on the flip side, there are growing numbers of people who are forced further and further away from being able to enjoy the same level of amenities as the city grows.

So how should we balance the wants of mostly well off existing wishes with the increasing needs of younger people and future residents to our city?

So despite your claims, many would disagree that there isn’t plenty of things “broken” with planning rules and design in existing areas

How can ACT Government again get it so wrong?
Under the guise of the Demonstration Housing Project comments on a variation to the Territory Plan for one single block, located in an RZ1 zone and creatively termed Griffith Manor House closed for public comment on 16 April.
This Trojan horse defies belief! A wolf in sheep’s clothing is more befitting…Local Kurrajong MLA’s phones must be ringing white hot with resident’s angst!
Interestingly, the Directorate received 530 submissions with approximately four letters (0.0075%) of support! The developers (one of whom apparently works for the City Renewal Authority) intend to build four flats and nine car parks demolishing a single story family home. What a bombshell for neighbours, residents and the community.
Families buy homes in Griffith and Narrabundah to access the many schools and education facilities in the area.
This ACT Government policy impacts on ALL Canberrans.
The proposed changes to the Territory Plan will provide be NO certainty, NO trust, NO confidence.
How can Canberrans commit to invest and purchase a family home without the possibility of a pop-up development next door? Where is the integrity and honesty in the ACT Planning system?
Real Estate agents over the border must be thrilled with this change of policy direction.

I fully support Paul Russell’s comments. We are sick to death of all this socialist whinging and whining. Take your corrupt practices somewhere else and leave the “rich” residents of Griffith alone. We don’t want you here.

How about a trial of affordable housing in an area that people can afford. Not fancy houses for millionaires that will make Government connected people millions of dollars in profits.

This looks like a dressed-up and, in a sense, proactive version of instances we’ve had in the past of existing dwellings in RZ1 areas being replaced with something which bent the rules to breaking point, but which somehow slipped through whatever approval process ostensibly applied at the time.

Official responses to such instances seem to have been variations on the themes of “imagine our surprise when we discovered….” and “it’s there now and we couldn’t possibly require demolition or major rectification – so get used to it”.

It’s also yet another instance of this government’s unwritten rule of “words mean what we say they mean” and related habit of making it up as they go along – an attitude which is what you’d expect of a local council of the worst kind, but which seems to permeate so many aspects of state and local government functions in the ACT.

In short, yes, it quacks like a (Trojan) duck.

Are there any architects in Canberra that can do better? Such horrible buildings around, made cheaply. Please show a bit of artistry in your work. 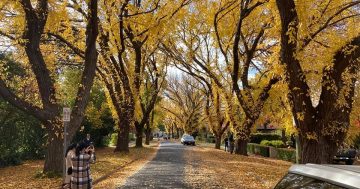