Collaboratively and competitively delivered across the nation
14 July 2021

A COVID-19 public health campaign spearheaded by Canberra Hospital’s Dr Nick Coatsworth has been superseded by a new advertising blitz, urging Australians to get the jab.

But one marketing expert has raised concerns that the new Arm Yourself campaign – which urges Australians to “arm yourself”, “your family”, “your friends”, “your workmates”, “your community” – is sending the wrong message, failing to address the issues around vaccine availability and appointments.

The ad’s launch follows concerns from public health experts that the existing community messaging was lacklustre. The Arm Yourself campaign will be released on social media, billboards, television, print and radio, and aims to encourage more people to get vaccinated.

“A COVID-19 vaccine is your best defence and our only way forward,” is the central message.

The head of the Commonwealth’s vaccine task force, Lieutenant General John Frewen, said the campaign would be adapted over time and translated to reach non-English speakers.

“The Arm Yourself campaign seeks to rally Australians to both arm themselves and to arm their friends, loved ones and communities against COVID-19 through vaccination,” he said.

“The materials will be adapted for culturally diverse groups and for Indigenous communities and they will be translated into many languages, and we will continue to adapt the products as we go through the rollout through this year.” 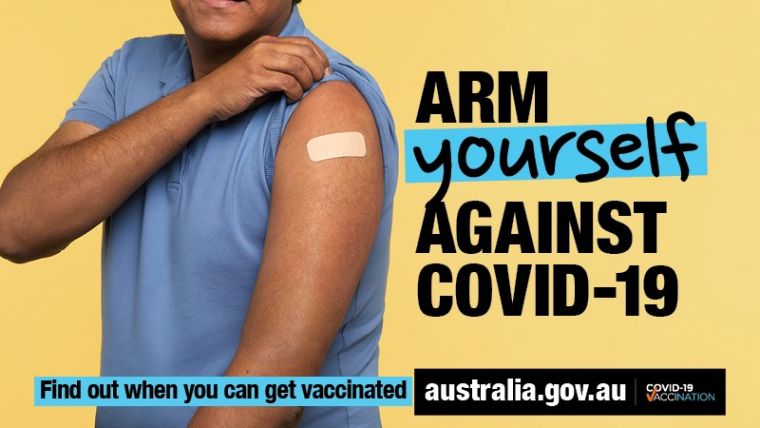 Andrew Hughes said the campaign was “one of the worst messaging failures in our public health history”. Image: Department of Health.

But Andrew Hughes from the School of Business and Economics at the ANU says the Arm Yourself campaign has missed its mark, failing to address the reality that people are highly motivated about vaccination but confused about what category they fit into, which vaccine to get and where they can access the jab.

“I’ve never seen a situation where people were more urgently demanding clear information, and it was less available from the government,” he told Region Media, describing the information campaign around COVID as “one of the worst messaging failures in our public health history”.

Dr Hughes says the public health messages need to be clear and consistent, not too complicated or wordy and with a clear motivation for behavioural change.

“The campaigns should have targeted people whose behaviour needs to change, the ones who don’t want to get a vaccine at all, people who think they’re bulletproof,” he says.

“And in fairness to ordinary Australians, many of them don’t know where or how they will get the vaccine.”

He’s critical of earlier ads, which he says failed to engage the public, creating a risk that people would stop paying attention.

He agrees that the Sydney-specific ad, depicting a young woman suffering serious effects from COVID-19, was more effective.

Chief Medical Officer Paul Kelly has said the more graphic 30-second spot is intended to shock the locked-down population of Sydney into action.

But Dr Hughes says the government needs to engage in heavy lifting, explaining its objectives simply and clearly.

“People are crying out for information. That’s why they are going to Norman Swan. It’s not that the ads themselves aren’t working. Without clear messaging, the whole campaign is not working.”

“The government is running out of time before next election,” he says.

“They wanted to tell the electorate a story about economic recovery and low unemployment, but that story will be lost because of this failure in the one area where it should be governing correctly.

“Had they got it right by now, we’d be talking about what a good job they’d done.”

A far more effective message would be: Lose weight – Stop Covid.
From Lancet:

“Our findings from this large population-based cohort emphasise that excess weight is associated with substantially increased risks of severe COVID-19 outcomes, and one of the most important modifiable risk factors identified to date. ” https://www.thelancet.com/journals/landia/article/PIIS2213-8587(21)00089-9/fulltext

But the fear of fat shaming those waddling slugs around us means the government takes the easier option of instilling irrational fear in the general population by resorting to lock-downs, mask wearing, social distancing and vaccinations instead of encouraging dieting.

NO, Top COVID Doctor, Dr. Peter McCullough, a professor of medicine who developed a globally acclaimed and highly successful COVID treatment protocol when viewing the ad said that those are not the symptoms you will see in a person of that age, a person of that age will only have cold like symptoms. He went on to say that it looks more like a young women experiencing a complication from a Vaccine, a blood clot in the lung (pulmonary embolism). He should no he has treated countless patients. Well done Australian Government, such blatant fear mongering tactics

While I have absolutely no medical qualifications to counter anything that Professor McCullough says on COVID, yrgna nagev, it seems to me that the young lady is on a ventilator – which as I understand it is, not only a treatment for severe thrombosis, but also for severe cases of COVID. Wasn’t one of the recent positive NSW cases, a 20 year old person, transferred to ICU and placed on a ventilator? So I guess, while the government may be representing a worst case scenario, perhaps that’s what’s needed to motivate the undecided.

Dr Peter McCullough has been widely discredited by other medical professionals and scientists for his thoughts on COVID treatments and the deliberately misleading anti vaccination messages he has been pushing.

Although it seems these days with such free access to messaging across the world, no matter what the topic is, the ignorant can find an “expert” view they agree with. The confirmation bias seen daily is astounding.

Agreed chewy14 – after posting my earlier comment, I found a report of an interview that Dr McCullough did with AsiaNews (on/about 30-June where he said the vaccination program should stop. So I’m not surprised to hear he has been discredited by his peers.

It’s effective, simple and on point (no pun intended)
I also like this one

There’s obviously been mixed messaging but a lot of that is because of political opportunism and the fact that the government cant control what health professionals say in an area that’s more complex than simply “Get Vaccinated”.

Particularly when people should never have been dissuaded from getting the Astra Zeneca vaccine.

“The ad’s launch follows concerns from public health experts that the existing community messaging was lacklustre.”

The “arm yourself” campaign is no better in that regard – bland, dull, colourless, low voltage – basically indistinguishable from the steady stream of yawn-inducing infomercials which emanate from Canberra regardless of which side of politics is in power.

Had they managed to get Lara Bingle uttering the notorious slogan, in the middle of a cavernously empty (AZ) vaccination centre, that might at least have stirred things up a bit – and shown an interesting streak of self-deprecation from the ringmaster-in-chief.

Its late. Very very late. Most of the world were running ads like this last year. People are more than happy to get the jab but the vaccinations just aren’t available. And the scare campaign isn’t as effective as we haven’t seen the level of hospitalization other countries have. Which is more based on people not having access to health care (America) or living in poor sanitation (India). It would’ve been better as some doctors have pointed out to use people who actually had the virus talk about its effects.

Please provide evidence that ‘the vaccinations aren’t available.’ This is not our experience. We’ve both had our first AZ jab and will have our second in just over 2 weeks. TIA.

Ever since hearing about younger people being in hospital with this new strain I have been fearful and this is what has motivated me to book in for the vacc, rather than the idea that the sooner we all get it the sooner life can go back to normal. The latter hasn’t really motivated me that much because, being in Canberra with very few cases, we haven’t felt the fuller effects of lockdowns etc.

Rather than marketing the information, how about informed choice?

It’s almost laughable, because there aren’t enough vaccines. Would be passably ok if there were sufficient. Why on earth it was released at a time of insufficient vaccines, I have no clue.

Trish Roberts What evidence do you have that the vaccinations aren’t available? Facts please. This is not our experience. We’ve both had our first shot and will have shot 2 in just over two weeks time. Making a 12 weeks gap.

It’s about making people aware…. I can’t wait for my second vaccine…

where can we book? my GP isnt taking any appointments unless i met certain criteria

Sherbie Leo which website? thats what I’ve been trying to find, some sort of covid jab center

Heidi Tunks thanks. that is much morr useful link

Sherbie Leo that link just tells me I’m not eligible. But thanks anyway. Heidi Tunks has given a link that identifies me as eligible for the AstraZeneca vaccine.

Karen Feng no problem. They made it a bit hard to work out

If everyone’s talking about it, it’s not a messaging failure.

M.J. Leonard the only time I’ve heard people talking about it is to explicitly state that it’s a useless campaign.