An illustration of the proposed Islamic cultural centre in Scullin. Images: IPDC.

An Islamic place of worship and cultural centre is planned for Scullin to serve Muslims living in the Belconnen area.

To be known as the Belconnen Multicultural Centre, the two-storey proposal is a project of the not-for-profit Islamic Practice and Dawah Circle, whose Canberra branch will operate and run the centre.

Sited on a 2200 square metre block at 3 Ross Smith Crescent (Block 27, Section 43), it is being planned in three stages with an overall cost of $2.5 million.

The first stage ($1 million) will comprise a main hall, prayer hall, office, library, kitchen and toilets; the second stage ($800,000) includes a second floor, seminar hall, classrooms and living room; and the third ($700,000) an area for women, a children’s room and an outdoor space.

The DA says IPDC Canberra is seeking a multi-purpose community centre for religious and social activities and programs.

It will be used for regular worship and learning and teaching activities, activities for children and women, community gatherings and other social welfare programs.

IPDC says the centre will meet the long-standing need for a permanent place of worship in Belconnen where a large proportion of the Muslim community live and have limited options to meet their religious needs.

IPDC envisages the centre as more than just a place of worship, wanting it to be an active community hub that can build bridges with other faiths. 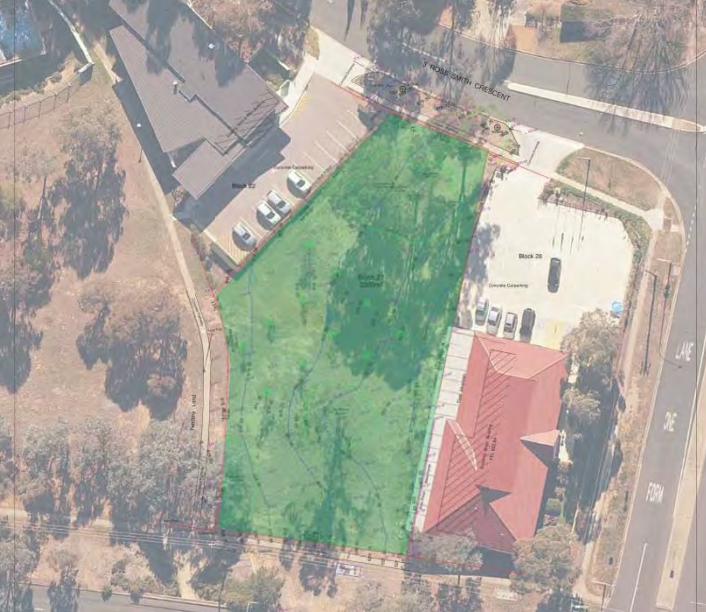 The Scullin block lies between the Khmer Buddhist temple and the Cerebral Palsy Alliance.

”With a Buddhist temple and a church within walking distance, the proposed site is a perfect fit for a place of worship,” the DA says. ”This can be ‘faith and community-hub’ of the Belconnen region.”

Other neighbours include the Cerebral Palsy Alliance.

Sensitive to possible community perceptions of Islam, IPDC says the focus is to build a future generation which will integrate into multicultural Australia.

”The community will be very much supportive of this project to maintain a peaceful and harmonious environment for its neighbourhood,” it says.

According to the plans, this proposal will not utilise traditional Islamic architectural features such as a dome.

The development will mean the loss of four registered trees but the proponent plans to offset this with the planting of 10 trees off the site.

There are three mosques or Islamic centres in the ACT, at Monash in the south, Yarralumla and Gungahlin in the north.

Last November, the city’s small Ahmadiyya Muslim community lodged plans for a mosque to be built on land in Narrabundah behind the Ball Park.

In 2017 the ACT Government offered it a 4000 square metre block in Narupai Street as a direct sale.

The $1,288,000 proposal, designed by AMC Architecture, consists of a two-storey, 700 square metre mosque for 300 worshippers, a 150 square metre Imam’s residence with double garage, VIP and general car parks, and landscaping.

It's funny because it basically looks like a north side house that's just been scaled up a bit! Looks good though!

Surely there is a church up for sale that they can repurpose!

As a Scullin resident we already have a Buddhist temple. I love their open days with a great variety of food. Hope this means more yummy multicultural food 😋

Archie Mac now you're someone with the right priorities! Bring on the noms!

How many more places of worship are you planning on putting in Scullin or in area surrounding if this goes ahead it will 6 with 2 just across the road, literally.

Can the local roads handle the increased traffic?

It's just off Belconnen Way.

With no access from Belconnen Way but through an already congested intersection due to the 2 other places of worship either side of main road.

Kirsty should remove another church as it is?

Michael Ilsley - 11 minutes ago
Privatise education View
Paul South - 3 hours ago
A broom through the whole works would be nice . The whole system is unnecessary complicated. The culture of the whole school... View
Stephen Matthews - 6 hours ago
Paul Leins You can spot ghe sky viewers here View
Opinion 201

Alex Fox - 12 minutes ago
Ali Light Alasady nah that just makes you the angry driver 😌 View
Paul Funnell - 3 hours ago
I have no problem with people doing the speed limit my hate is people doing 10-15 kph under the speed limit for no reason peo... View
Lyn Mellier - 3 hours ago
I've been tooted when indicating, slowing down to turn into my own driveway. Rude impatient drivers on Canberra roads. View
Breaking 22