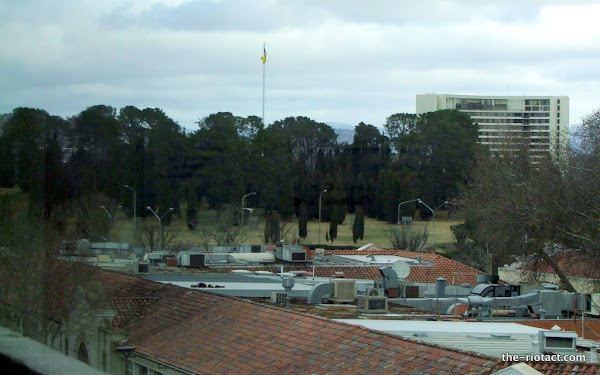 The Greens’ Caroline Le Couteur has, albeit backhandedly, declared City Hill is not a park.

It’s in the context of complaints that a patch of land near, but not part of, Glebe Park is being turned into a car park.

She had this to say:

“Glebe Park is our only real city Park and we should keep it intact.

Which is odd because when your RiotACT editor takes his lunch on City Hill, on one of the many park benches, he most certainly feels like he’s in a park.

But while we’re on the subject… Commonwealth Park in all its vast glory is separated from Civic by, wait for it, a short foot bridge!

Doesn’t count as a city park?

Don’t get me wrong, I love Glebe Park.

But considering they knocked down half the historic glebe to build a casino it seems odd to be getting emotional about a patch that isn’t actually part of the park, and claiming it’s the only city park when in fact Civic has a huge other park on prominent high ground.

and on any given night there are dodgy goings on by drunk people stumbling up from mooseheads….

not that I would know anything about that….

Glebe Park doesn’t feel like a park – it feels like “Glebe Gardens” being walled ‘n all. Unfortunately “Glebe Park” is long gone – since Canberra’s “anti-history, anti-gardens” government got hold of it some 15 years ago.

Cross the traffic lights at the intersection of London Circuit and Northbourne Ave!

Then we just declare Caroline Le Couteur, Greens Planning spokesperson is not an MLA. that should fix the problem quickly.

You’d be surprised how many people are up there having lunch, doing bootcamp, sitting in the sun, on a nice day.

I think the Wikipedia article summarises quite well:

The park is centrally located and well-known, but it is rarely visited as it is away from shops and public areas and is difficult to access because it is surrounded by a major road.

Cross the traffic lights at the intersection of London Circuit and Northbourne Ave!

now if there was only an easy way to actually get to city hill (without dicing with death in the traffic) – it would become a nicer place to hang out. As a former city west worker, it was but a stones throw from our glassed edifice, and not a bad place to hang. Maybe whoever builds on Section 63 will be so kind as to provide a skybridge…

Julie Macklin - 42 minutes ago
Unfortunately I would have to keep my petrol car too, as electric cars can't go where I want to drive. Good for urban areas,... View
Brent Hutch - 52 minutes ago
Even 200,000 cars at a discounted price of 40k per car, will be 8billion. Obviously this number will increase as more cars ar... View
Gloria Altinger - 1 hour ago
Brent Hutch 12km for 675M.. 85 klm North to south... hmm ok so maybe at least a 100K 50k Electric cars to the roughly 260k re... View
ACT Election 21