It takes a crane to lift a wheely bin? 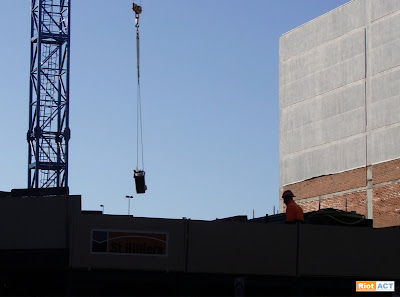 So this morning in Civic I was a little surprised to see the great big crane on the former Greater Union site shifting a wheely bin around.

So building nerds, is this normal? 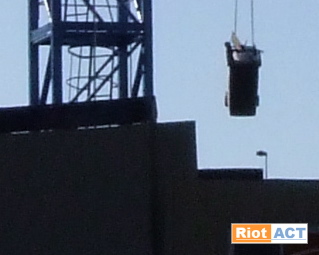 25 Responses to It takes a crane to lift a wheely bin?
Filter
Showing only Website comments

The contents are irrelevant, vg. Even empty it will still do you in from a decent height.

I will repeat again for your benefit

“OK, so you’re 100% sure that its concrete in the wheelie bin described above. Or are you just assuming?”

The trucks in Canberra have a large clamp that grips under the top rim of the bin on 3 sides.

Regardless of whether it’s specifically illegal or not the OH&S legislation mantra says that employers have a legally enforceable duty of care to “take all reasonably practicable steps to protect the health and safety at work of its employees and contractors.” I would say it’s both reasonable and practicable for a large construction company to have a better method than this, wouldn’t you?

For shits and giggles… Australian Standard 4123.1-2008 Mobile Waste Containers – ie; wheelie bins. Nominal load is specified as 400kg/m^3 – the standard 240L wheelie bin should be capable of carrying at least 96kg. Concrete nominally weighs 6 times as much per volume, 2400kg/m^3. Even the lifting equipment is specified, and none of it is designed to lift using the handles.

OK, so you’re 100% sure that its concrete in the wheelie bin described above. Or are you just assuming?

Well, dont garbage trucks use something like a claw that clamps around the top 1/4 of the bin, and lifts that way?

JB, you need to get out less.

Ya just can’t get away with anything these days, with all the RiotACT paparazzi around.

It’s how they transport the zombies..

I’m a human with 31 years experience and my experience states that its better than using the stairs.

Workcover may have rules for the proper use of a wheelie.

Not an expert in the area at all niftydog

Bloody unions and OH&S, probably afraid that dragging a bin will a compo payout…. actually, bloody lawyers too.

I am a qualified rigger of over 10 years, G-Fresh, what’s your experience in this area?

My understanding is that hopper used in this way must be engineered specifically for the purpose.

It’s either lunch or a porta potty for the crane driver. 🙂

why would that be ?

Kathy Tozer - 22 minutes ago
We have been seeing them around Canberra in the last couple of months. View
Ellen Maree - 2 hours ago
Helen Crane we saw one today!! View
Kath Sheppard - 2 hours ago
Seen one last week in neighbours yard View
Opinion 1

facebook_user - 31 minutes ago
Excellent article Hon Deepak-Raj Gupta. You are spot on regarding the Pandemic COVID19 and themself reliance required by Canb... View
Opinion 1

Acton - 2 hours ago
$100,000 on a rebranding exercise, paid to some contractor, once again demonstrates the waste and extravgence of the ACT gove... View
Community 33

watto23 - 2 hours ago
So why can't the liberals provide a solution to this problem. They are very good at pointing out everything Labor does wrong,... View
Property 6

Jeremy Calero - 3 hours ago
Kaitlyn nothing will stop it lol View
O L - 4 hours ago
Wonder what that means for rental longer term? Probably go up after covid to match increase in housing values View
Rodney Weber - 8 hours ago
Shiva Sapkota A lot of the older areas also have many poor quality houses. Cheap materials :-( View
Community 12

O L - 4 hours ago
HECS gets paid only when you earn enough money to pay it back. What’s the problem with that? Fair system and I had no issue... View
News 6

O L - 4 hours ago
Great, that means little to no federal funding coming our way View
Annie Mills - 5 hours ago
Ben Winkler I have a sneaking suspicion that people in the bushfire affected areas are so desperate for the help they have be... View
Craig Griffiths - 6 hours ago
I've become convinced over the years that tabloid media have a psychological code in the messages they put out during electio... View
Property 10

Martin Dallen - 9 hours ago
Lauren Du Fall this is the place we could see across the inlet from air bnb. View
Nora Preston - 14 hours ago
Didn’t Rudd buy that? View
show more show less
*Results are based on activity within last 7 days

@The_RiotACT @The_RiotACT
Are you selling your home? Here's some great advice about avoiding buyer turn-offs that can significantly impact the selling price of your property https://t.co/DTwVA8q0RO (47 minutes ago)

@The_RiotACT @The_RiotACT
Yerrabi MLA Deepak-Raj Gupta says COVID-19 can teach us all to be more self-reliant and to have a stronger focus on our local community and businesses https://t.co/qoDy90jHd7 (2 hours ago)