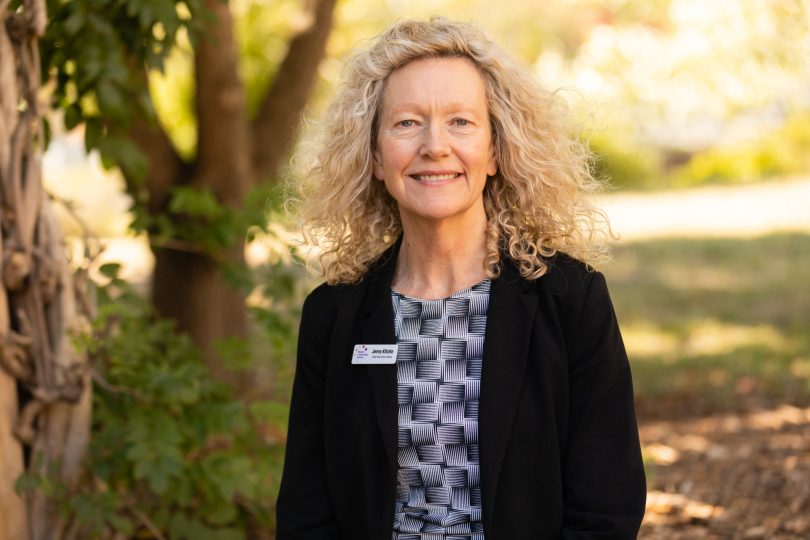 She grew up in Woden and lived in one of the first houses in Chifley, at a time when the countryside was sparse, there were no local shops and the trip into the city was a long one. Today, Jenny has returned to the area but as the new Chief Executive Officer (CEO) of Woden Community Services (WCS).

“I’m absolutely loving it,” says Jenny. “It’s like returning to my childhood roots in some ways because I watched this community grow. And it’s exciting because the WCS is celebrating 50 years of service and still doing a wonderful job providing services to the community.”

As the new CEO, Jenny’s vision for WCS is clear—to maintain and continue to strengthen its local presence so that all people in Woden, Weston Creek and Molonglo can contact WCS for help. This includes growing and strengthening services in the areas of disability, children’s services, mental health and housing programs.

Jenny’s strong sense of social justice is palpable and her passion for doing the right thing by those experiencing disadvantage is intense. As leader, she’s committed to supporting the staff she believes handle some of the most difficult jobs in the community. WCS, a not-for-profit organisation, employs more than 350 staff and has an active volunteer program.

To get the job done, Jenny draws on her extensive career working in leading welfare services in the ACT, New South Wales and South Australia. She also draws on her qualifications in Sociology, Social Work and Business Administration.

Jenny’s depth of knowledge of community sector issues is second-to-none; moving into leadership positions in the sector in her late twenties means she has a wealth of experience to rely on.

Before returning to Woden, Jenny worked in Anglicare for eight years as the Executive Manager of Child, Youth and Family Services overseeing out-of-home care, youth, family, housing, homelessness services and other community services.

She was also senior executive in the ACT Community Services Directorate and the Regional Director of Barnardos Australia (ACT) and has been on a number of forums in the ACT. She led the ACT Community Sector Leaders Forum for six years. “The Forum brought together community agencies to hear national speakers present and discuss key issues facing the sector,” says Jenny. “It’s so important, and valuable, to get diverse views on the table.”

A key achievement for Jenny over the last three years was working in out-of-home care with children and young people in foster care or residential care who couldn’t live at home. Jenny worked hard to prevent these children from drifting in care through more permanent solutions.

It’s early days for Jenny at WCS, who became CEO only on 11 February, but already work has begun.

Jenny highlights the challenges around funding for community organisations. “When demand for services outstrips the funding, you have to provide that service for the community, it can be difficult,” she says.

Other challenging service areas are also a focus. Private rental housing, for example, has become less available for those struggling with low incomes. There is a higher incidence of complex mental health issues among people of all ages and people with disabilities face challenges negotiating the National Disability Insurance Scheme system.

“Because of these complexities, leaders of community agencies need to look at how best to equip WCS staff to do this complex work, constantly building their knowledge and skills,” says Jenny.

The WCS is working with the ACT Government to fund a large community centre in Woden to house a number of WCS programs. The centre, which will act as a hub, would be accessible to those in the local community who need to drop in and access family support, services and advice.

Jenny is under no illusion that a lot of work is needed, but she and her team are up for the challenge.

As for Jenny personally?

“This new role feels like it’s all coming together for me because I have a long history of working with disadvantaged people and appreciate the chance to bring my experience back to a part of Canberra I adore,” she says.

Shane Westmore - 2 hours ago
Absolutely. There’s people voting now who are completely misinformed about anything going on in this country & waste their... View
Nada Krstin - 4 hours ago
oops, meant to say, cannot have it one way! :)... View
Nada Krstin - 5 hours ago
No. And if you think they are mature enough to vote at 16 or 17, then they should be tried for any crimes as adults as well,... View
Opinion 94

Mark Parton MLA - 5 hours ago
Thanks for constructively engaging, but I would reject the characterization of my advocacy for Alex as a media stunt. And I w... View
Mark Parton MLA - 10 hours ago
All I’m doing, is trying to help as many people as I can, as best I can and I make no apologies for doing it. Everything I... View
News 10

Support for the vulnerable doesn’t stop when a pandemic hits