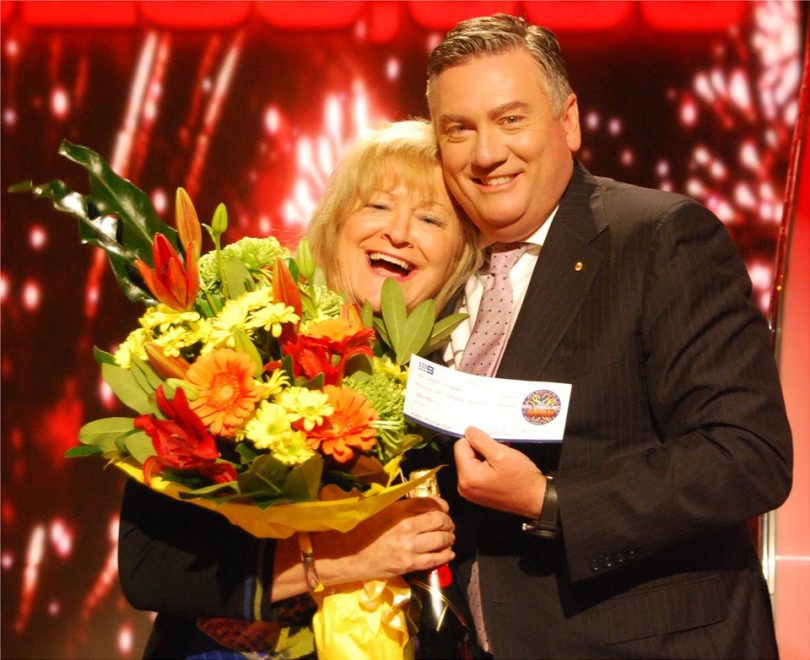 A delighted Dawn Simpson receives her cheque for $250,000 from Who Wants to Be a Millionaire host Eddie McGuire back in 2015. Photo: Supplied.

When Dawn Simpson won $250,000 on the TV quiz show, Who Wants to Be a Millionaire, she told host Eddie McGuire she was going to use some of the money to help Indigenous women and children in Alice Springs. And that’s exactly what she did.

She’s since made two trips up there from her home in Batemans Bay with loads of clothes, toys and whatever else the women needed.

Did she do anything for herself with the winnings? “I got a breast reduction,” she laughed, “I didn’t tell Eddie that though.”

Dawn Simpson, 72, is the sort of woman you’d like to adopt. She’s smart, funny and you get the feeling she’d fight tooth and nail for the people and things she believes in.

Even when times were tough, when the love of her life, her husband Bob became ill, Dawn didn’t lose her passion – for just about everything.

The money she won on TV also went a long way to ensure Bob had the best of care.

“I love life,” she says. “When my Bob got dementia there was no way I was going to sit around and mope. I decided to live every day the best I could.

“My house is called Carpe Diem and that’s my mantra – live every day as if it’s your last. ”

Dawn was 38 when she met “my Bob”. They both worked for Telstra – Dawn was the Telstra Tower controller in Canberra for three years from 1988, a job that ranged from hosting VIPs to managing the maintenance of the then-popular tourist attraction. This was followed by a stint as chair of Canberra’s tourism attractions.

By then, she had been engaged a couple of times, “but it never seemed right” so she wasn’t convinced she would ever get married.

“The funny thing was that when I met Bob, I thought he’d be a good match for a girlfriend of mine. I invited him to a bicentennial party I was having. He told me not to bother lining him up with my friend because he was interested in someone else. I asked who he was interested in and he said, ‘you’.

“I must say that made me look at him in quite a different light. Up until then, the men I knew were only interested in one thing – and it wasn’t my cooking skills.”

Dawn and Bob shared 32 blissful years. “I feel blessed for every day I had with Bob and that he taught our son Tom to be a good man – and I’m so proud that Tom has carried those skills through into his adult life.” 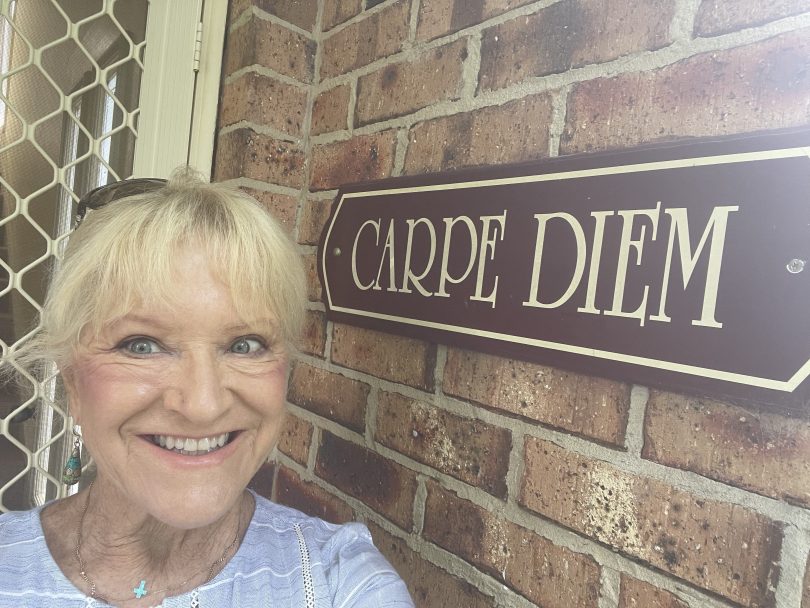 From the day Bob developed dementia to when he moved into a nursing home to the day he died, Dawn stayed by his side. She’d lunch with him most days, hold his hand, and talk about anything and everything.

The first time she realised he didn’t recognise her, she raced out of the nursing home and headed home. Not because she was upset, but because she wanted to find their wedding album so she could remind him of their happiest of days.

“He looked at a picture of us and said, ‘you’re my wife?’ and kept asking me that as if he didn’t believe it. I couldn’t seem to convince him that we were married, but when I told the nurse who had been looking after him, she said it was because he couldn’t believe his luck in having me as his wife.” 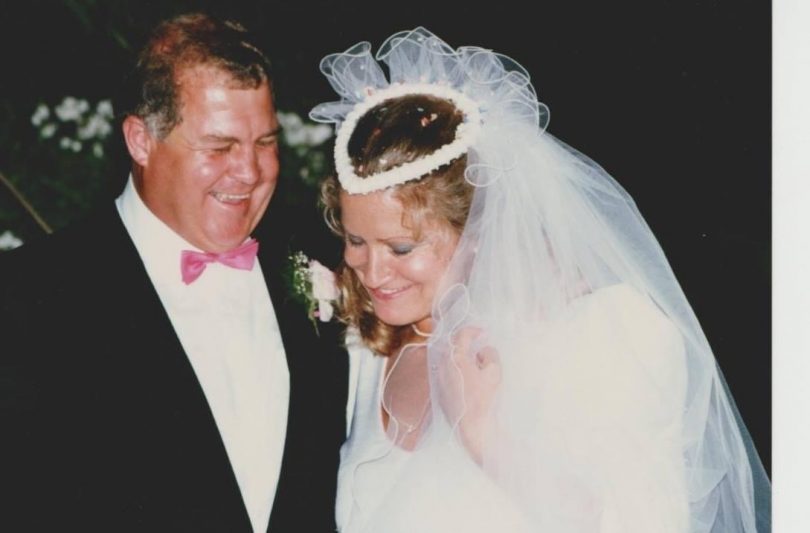 Dawn’s favourite photo – her 1989 wedding to Bob Simpson. “He had just said something really funny,” she said. Photo: Supplied.

After her husband died, Dawn said all her friends and family told her it was time for her to put herself, rather than everyone else, first.

So, with some of her TV winnings, she headed off around Australia for eight months in a campervan. Alone? No, she took Dicky with her – a blow-up male doll who sat with her in the front seat. “He was pretty laid-back,” she said.

On her return, Dawn decided she’d had enough of being alone. “I discovered that it’s really hard sometimes to be a single woman. You go into a restaurant and the waiter brings you your food so quickly as if he wants to shoo you out so a couple can take your place. It just made me feel uncomfortable. All I wanted to do was find a nice man.”

So she went on some online dating sites, but that didn’t work for her.

“Then I heard about this TV show, First Dates Australia, so I thought, I’ll give it a go.”

“I’m probably going to be around for another 20 years or so. I have a lot of friends but I’m looking for more – and I’m not willing to give up on love.”