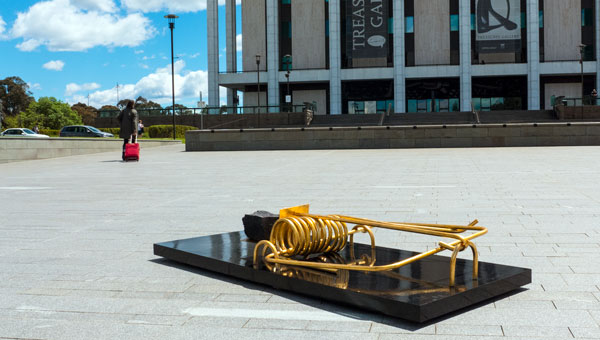 Contour 556, Canberra’s 2016 public art festival, is open this weekend along the southern foreshore of the lake. It will be there for three weeks, closing Sunday 13th November.

I managed to get Neil Hobbs, the chief organiser, to stand still for a few minutes on Tuesday to talk about issues around staging this festival. Art was arriving, the phone was ringing and artists were trying to get his attention. 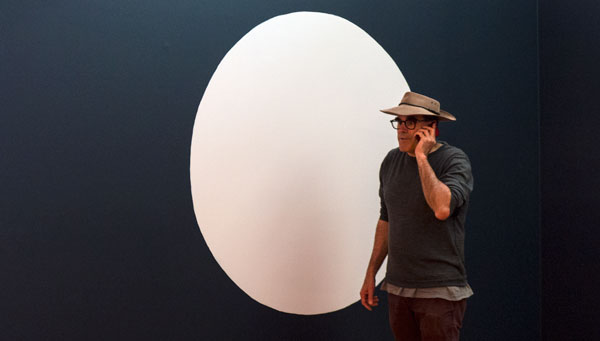 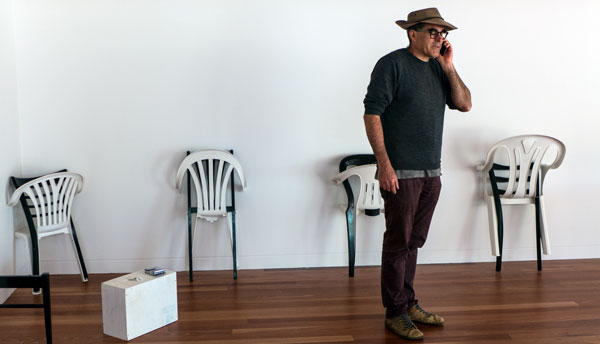 The first thing we agreed on was that other press commentators have it wrong – this is not the first public art (sculpture) festival. There was another in Canberra in the early 1990s. In fact Neil pointed to the spot where in 1995 a sculptural piece was placed that went on to cause a national stir because of its subject matter.

The work was installed right by the side of the lake. Since then the lakeside has been extended out and the Commonwealth Place gallery now stands over that spot. There will be a work in the gallery by the same artist as a memorial to that event. (I will leave it you to see the new work and to work out what the original was all about).

Neil and I talked about the difference between this festival and other sculpture festivals. This festival is not just about sculpture. It also has art inside at the Commonwealth Place Gallery as well as performances and poetry.

And there is a generous acquisition prize thanks to the support of Canberra Airport. Well done them for their support for local arts – again.

On the subject of support, there is no doubt that Neil has tapped into something here. He has received government support including timely assistance from various government bureau staff. A wonderful thing is the financial and moral support he has experienced from local businesses. Neil suspects that with this level of people willing to assist that there should be more public arts festivals in Canberra in the future– maybe every two years.

A side benefit of the festival has been that some local businesses have made contact with artists about future commissions or purchases for their venues. All indicators are that Contour 556 is unearthing the on-going significant support from the Canberra business community for more public art across Canberra.

A public art festival is a natural fit for Canberra.

Canberra is well known as a ‘City in the Landscape’. The festival is being staged in and around the parklands along the lake and in other sites around our national institutions. This highlights how lucky we are to have the legacy of former decisions to have so much of Canberra as open spaces and within that so many wonderful trees. I am not convinced that we need all those grassed areas requiring constant mowing–but nevertheless, Canberra’s open spaces are the envy of many.

While these spaces (and their trees) need to be safeguarded as part of the city’s heritage, that does not preclude creative uses such as for an International Garden Festival (just right for West Basin) and a bi-annual public art festival, such as Contour 556.

Here’s a link to my former post with the press release on the details of the events – click here. There’s also a map online – click here.

Here’s a few pics of some of the works – including one that demonstrates what happens when you place a work on grasslands where school excursion buses pull up to allow the children to run around for a few minutes. 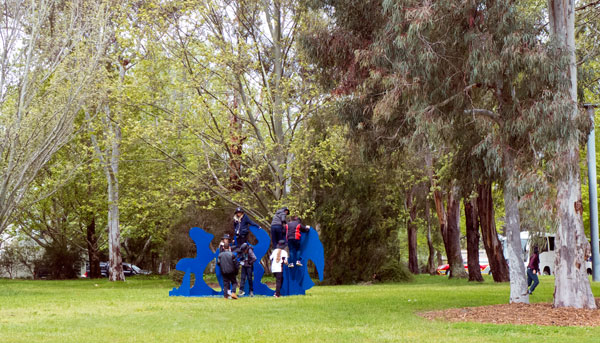 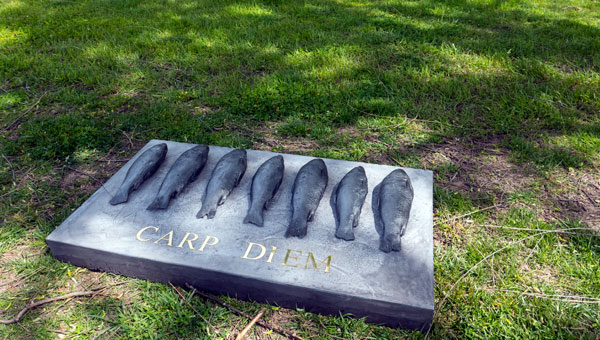 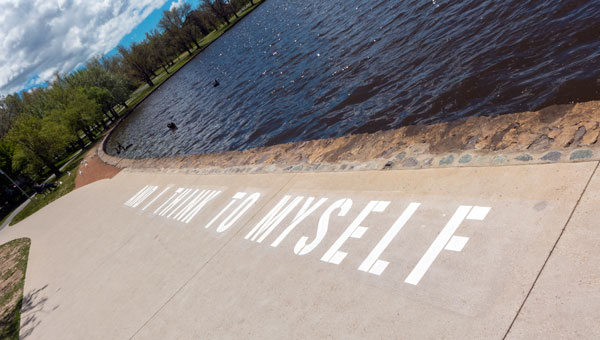 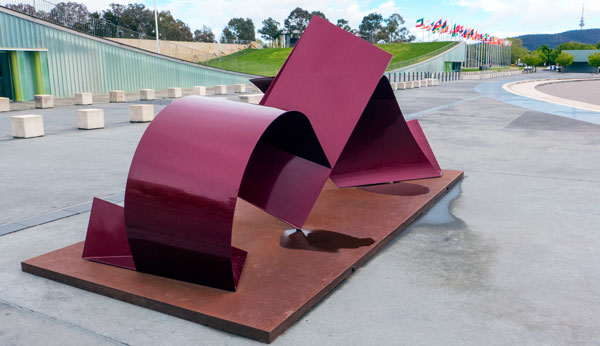 and then there is all the work that goes to getting these things installed. On Wednesday there were people hanging off Kings Ave Bridge installing something, a couple of cranes delivering a chunk of stone as well as artists and helpers off-loading and building in various places– here’s a few… 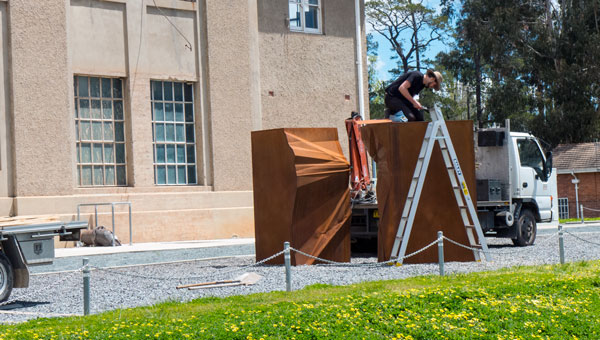 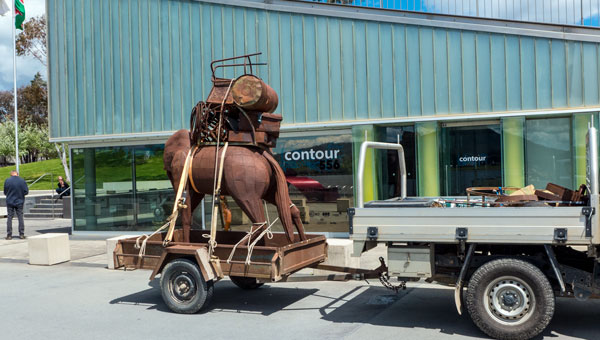 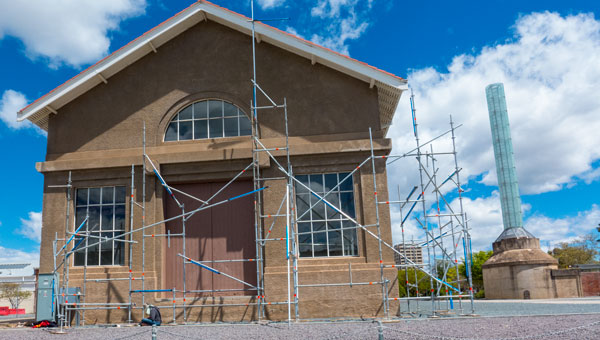 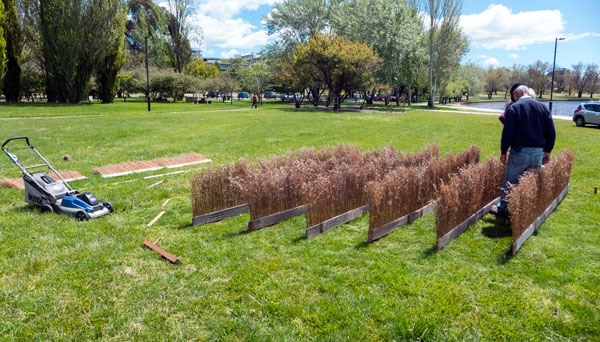 Remember there are visual artworks on exhibition inside the Commonwealth Place Gallery. The most westerly placed outside sculpture is at the National Library, and the most easterly is on the side of the Fitters Workshop in the Kingston Arts Precinct (near the Sunday Markets).

Besides the sculpture, there are performances, poetry events and other talks that you can attend – click here.

Big congrats to Neil of Harris Hobbs Landscape for initiating this event. Neil and his partner Karina Harris are well known locally and nationally as successful landscape architects, but this event and other local initiatives once again highlights their extraordinary personal commitment to the arts. Well done both of you.

So now it’s your turn.

Starting this weekend, and/or sometime during the next three weeks, get out there and talk a walk with friends and family among the festival’s many artworks. With 50 local, national & international artists contributing, there will be something for you there. Go for it.

Their is an awesome easter Island head out of beer on the parkway is this part of this?

Denise Bourke - 3 hours ago
I was disappointed U didn't get my Lego joke ... There's more people who share your view .... But í know the frustration. View
News 19

David Reid - 5 hours ago
Do the words frying pan and fire come to mind. View
Lee McDowall - 11 hours ago
Good luck, it will be a big feat to improve this mess. Talk to the little people, not the hopeless politicians or their lacki... View
Food & Wine 65

Prianca Chowdary - 7 hours ago
Rama Gogineni and Kavya Kogantimaybe you guys should get this... View
Leonie Waldock - 8 hours ago
Rowena Tibbits This one..... View
Cassandra Jones - 11 hours ago
Emily Baggott your dream place! View
ACT Election 26

JC - 7 hours ago
The problem for the liberals with the swings you mention is that Hare Clark is used in ACT elections. Why this is a problem i... View
Christopher Cuba Rabanal - 12 hours ago
And be the party of 2020 to lead the capital. Instead your party is set back in 1960. With an antiquated outlook.... View
News 22

Ross Bryant - 8 hours ago
Why introduce a problem that we didnt have to have? Walking is safer and there are buses, trams and ubers/taxis to get around... View
Joe Zuzek - 9 hours ago
Darren Gerrard you get points for trying. View
Darren Gerrard - 10 hours ago
Joe Zuzek what if you put the scooter in the car View
Opinion 22

HiddenDragon - 8 hours ago
The emboldened Greens may well have some success in getting priority for social housing but, important as that will be for so... View
Sport 20

Elaine Hallam - 13 hours ago
Yes Jack Congratulations you have the medal in your pocket it's all sour grapes let them cry I say... View
show more show less
*Results are based on activity within last 7 days

@The_RiotACT @The_RiotACT
If you're driving to the coast, be prepared for more delays when safety improvement work is carried out west of McCardys Creek Road https://t.co/JtkZMJh3a5 (7 hours ago)

@The_RiotACT @The_RiotACT
Life is slowly returning to normal at @NatGalleryAus, with major renovations, a new art store & a fabulous exhibition about women artists adding to the offerings https://t.co/36yAvW1Us1 (8 hours ago)

@The_RiotACT @The_RiotACT
Why would anyone drag a piano through the streets? It's all part of Contour 556, filling the city with provocative public art until October 31 https://t.co/Lsr3dnTMWF (9 hours ago)