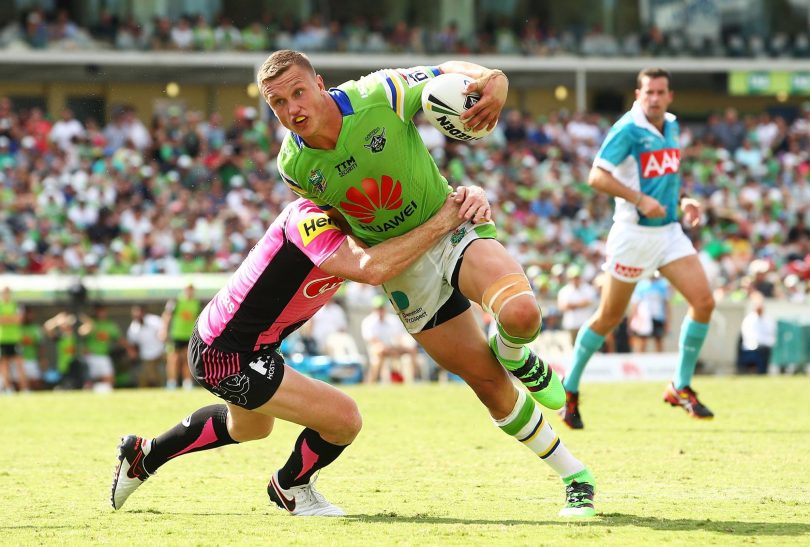 Jack Wighton will start the 2019 NRL season in the halves. Photo: Supplied by Canberra Raiders.

The Canberra Raiders’ struggle to find a consistent halves partnership has hopefully come to an end after the announcement that Jack Wighton will take the number six jersey this season.

The Raiders went through three different halves partnerships in the first six rounds last season, with coach Ricky Stuart chopping and changing between Sam Williams, Blake Austin and Aidan Sezer. The Raiders only won two of their first six matches, as Stuart dropped Austin to the Mounties to rediscover his form and Williams was in and out of the side due to injury.

With the departure of Austin to the UK Super League at the end of last season, the Raiders hope their new partnership of Sezer and Wighton will guide the club back to finals for the first time in three seasons.

Heading into the 2019 NRL season, Sezer and Williams were the only recognised halves in the Raiders’ squad with young halfback Ata Hingano’s shoulder injury leaving him on the sideline till April.

Seen as one of the leaders in the club, Stuart has put his faith in Wighton to help lead the side with Sezer, tasked with keeping the side calm in pressure situations where they have let results slide in the past.

Wighton is not totally unfamiliar with the position, having worn the number six jumper during the 2014 NRL season alongside Terry Campese. It was a short-lived venture with Wighton moved to centre nine matches later and then to fullback.

The 26-year-old has admitted he wasn’t ready for the switch to the halves five years ago but believes he has now matured as a footballer and is ready to help lead the side around the park.

With his direct running style and constant desire to attack the line, he could serve as the perfect foil to Sezer’s kicking game and game management. In 2018, he was the Raiders’ third most reliable creator behind Aidan Sezer and Josh Hodgson giving eight assists in his 13 games last season.

But the main reason why Stuart has chosen Wighton to fill the five-eighth position is his stellar defensive ability.

The side know they are capable of scoring plenty of points, finishing the 2018 season with the second most points scored, but if the side wants to return to finals in 2019, a sturdy defence is required. The Raiders lost 11 games by nine points or less, eight of which were by a converted try. The Green Machine suffered three straight defeats to start the season with a combined losing margin of only five points.

Stuart’s main focus this pre-season has been to shore up the Raiders’ leaky defence and Wighton’s physicality and ability to read the game is a huge plus for the Raiders.

With Wighton moving to the halves, speculation will go into overdrive as to who will be his replacement at fullback.

I’m gonna hold back my skepticism until I’ve seen him play in a real NRL match, but I know from experience he is susceptible to the odd intercept and “loose” pass. But like I said, lets give him a go and see how he does.

Barry Finch - 3 hours ago
Absolutely agree. Canberrans and the ACT Government should be able to decide on all issues affecting us, rather than falling... View
jorie1 - 6 hours ago
I support s.122 of the Constitution. You cannot just decide to change the Constitution because you feel like it. The people o... View
Andrew Turnbull - 8 hours ago
Paul Irving ok, now putting your own bigotry towards people of faith how about the actual issue itself. aside View
Lifestyle 33

Michelle Paul - 4 hours ago
They probably have to keep wearing their ring until the show is over.To throw us all off. View
News 73

Julie Macklin - 4 hours ago
Samuel Gordon-Stewart I'll try that next time. Thanks. View
Capital Retro - 7 hours ago
I can see the logic in what you say and thanks but this assumes that the person checking the others in knows who the others a... View
Samuel Gordon-Stewart - 7 hours ago
Julie Macklin With the NSW app, if you don’t have it installed, you can scan the code with your camera and be directed to a... View
Motoring 6

David Tickner - 6 hours ago
Alan Davey, sad but so true mate. So many whingers out there these days, with nothing better to do with their life unfortunat... View
Opinion 5

steve2020 - 8 hours ago
It's cross-cultural and inter-cultural collaboration. No different to many football teams or workplaces, for example. View
Kieran Livingstone - 9 hours ago
“What right do I have to answer such a question when I am steeped in white male privilege?” View
Maya123 - 9 hours ago
“Isn’t this a bit of a oxymoron… ur stating issues of Aboriginal culture while u have a all white band… seems ur just... View
Community 1

Ol L - 9 hours ago
Scary figures for these retrospective energy improvements. All homes September 2019- ‘The cost of the retrofits ranged betw... View
jorie1 - 10 hours ago
Well said @Acton. The price of the property dictates what you get. If you want to rent a 6 star energy efficient modern updat... View
jorie1 - 10 hours ago
I agree that a world view of housing should be to provide shelter first, and most houses in Australia do provide shelter. But... View
Opinion 12

JC - 10 hours ago
You could probably go back to Tuggeranong actually. And the reason is the design and the underlying principle that underpinne... View
News 2

Capital Retro - 11 hours ago
The workers should be in quarantine also. And why they are in a hotel is a mystery - they should be in a tent camp in the bus... View
News 22

Karen Feng - 11 hours ago
yes. current method seems to allow people to suffer till they die. My dad had cancer and he wanted to be euthanized. I was go... View
Opinion 27

Capital Retro - 11 hours ago
As well as being an apologist for the un-needed light rail, JC has also become a consultant for "Fix My Street" which is spon... View
Capital Retro - 11 hours ago
Well, it was pointless to replace one existing and successful mode of transport with another. The same "urban renewal" missio... View
show more show less
*Results are based on activity within last 7 days

Top five take-outs from promising Raiders’ round one win

@The_RiotACT @The_RiotACT
Dreaming of cocktails on the coast? A refreshed @CorrigansCove Resort in Batemans Bay could be the perfect spot for your next getaway https://t.co/2JGOZd9wkS (5 hours ago)

@The_RiotACT @The_RiotACT
Just because you're gluten intolerant or vegan doesn't mean you have to miss out on hot cross buns. Delicious options are out there thanks to a local legend https://t.co/yoEXnL3FJk (6 hours ago)

@The_RiotACT @The_RiotACT
ACT Liberal Senator Zed Seselja said he is open to giving the Territory the right to legislate on euthanasia, as long as the changes were part of a broader push for expanded Territory rights https://t.co/8sRQRBrSJC (8 hours ago)