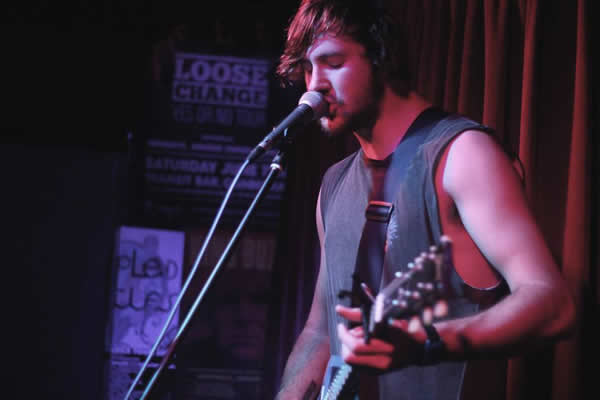 I got to Transit just in time to see Jimmy Pike, Aussie hip-hop artist, pacing between the bar and the stage, occasionally stopping to put his hood up, then back down, then up again.
The anticipation was starting to rise as it got closer to Jimmy’s set time, and I was keenly interested to see where the show would end up.

I introduced myself and told him I’d be reviewing the gig – probably a mistake because afterwards his pacing quickly turned to nervous jittering and what seemed like about a hundred cigarette breaks. Obviously nervousness was starting to kick in.

When the music died down and the crowd got a little bigger, Jimmy took to the stage with his DJ and started with a little bit of awkward chit-chat, introducing them both to the crowd. I thought there would be a bit of stuttering or a hiccup or two, judging by the sweat on his brow and the nervous laughter of the crowd but to my complete astonishment, the moment the music started, any apprehension Pike held before the show totally disappeared. The absolute embodiment of confidence, he warmed up the audience with a few little witty jokes, followed on with a very cool beat and began performing with a stage presence so powerful it was almost impossible to look away. 360 meets Eminem meets something totally indefinable, I was completely engrossed in the complexity of his style, spitting lyrics faster than I could process the words, never missing a beat. By the second song, it was clear Pike was right in his element, loving the limelight and getting the crowd involved. With guest vocals by Mattrix from Canberra Aussie hip-hop crew Semantix and a cute cameo appearance by his younger sister, the performance was amazing and concluded with the entire venue intoxicated by the vibe.

Following Jimmy Pike’s performance was The Second Hand Salmon. A hard act to follow, but they definitely didn’t disappoint.

The Salmon came out for their last ever show at Transit and were determined to go out with a bang.

The five piece Canberra reggae/funk band with front man Jack Biilmann owned the stage, belting out some extremely funky melodies and generally having a great time while doing it. There’s nothing more refreshing than watching a band who loves their time in the spotlight. Giving off little acknowledgements to their listeners, an intimate group of followers sang along to their catchy tunes and after the show they were greeted by excited supporters and fans. The Second Hand Salmon’s style is hard to pin-point. On first hearing them play, I wanted to say funk, but then roots, blues and a touch of rock got in the way and we ended up with a melodic fusion of all the good stuff, genre definable or not. When Jimmy Pike stepped into the ring and created a funk/hip-hop/rock cocktail I gave up trying to figure it out.

It is super unfortunate that The Second Hand Salmon won’t be gigging anymore as they’re a great live band and have supported some really great musicians, The Beautiful Girls and Kim Churchill included. They have however, recently released an EP called ‘The Eagle’ that’s available for download on ITunes and Jack Biilmann did mention his intention to continue performing as a solo artist. An act I’d like to see plenty more of in the future.

All in all, the venue was great, the vibe was awesome and the music was sensational. If you can catch either of these guys playing shows around Canberra you’d be a fool to miss out.

Sylvia Doherty - 16 minutes ago
Amy MacMillen this is the talk that we went to that I was telling you about. View
Anne Brechin - 7 hours ago
I’m not convinced society as a whole wants to jail 11 year olds. View
Coralee Rauber - 7 hours ago
At age 11 the kids know better. The age should stay at 10 to be sentenced View
Community 92