Julie Bishop to replace Gareth Evans as ANU's next Chancellor 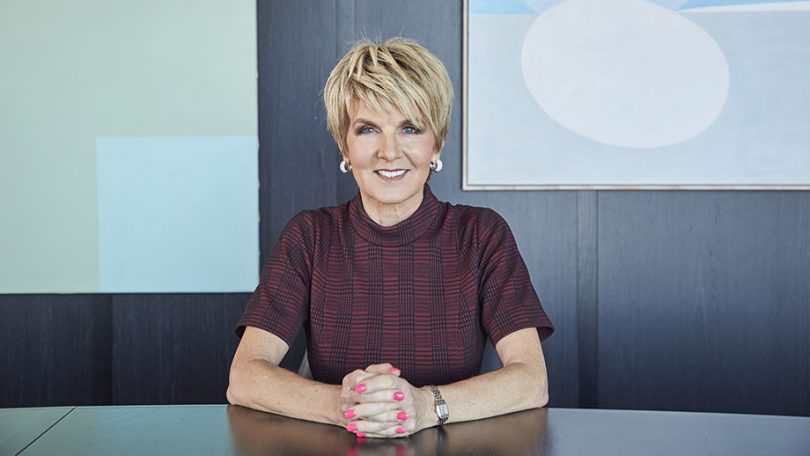 Former foreign minister and once-Liberal Party leadership hopeful Julie Bishop will replace Gareth Evans as the next Chancellor of the Australian National University.

In a statement released by Pro Chancellor Naomi Flutter, the ANU confirmed that Ms Bishop will step into her new role in January 2020, making her the ANU’s first female Chancellor.

Ms Flutter said that the decision to elect Ms Bishop came after the Chancellorship Forums held earlier this year, coupled with engagement with the Academic Board and student body representatives, which ‘highlighted the need for an eminent, distinguished individual, befitting our University’s stature’.

“It was clear you wanted someone who understands our distinctive role as the national university – contributing to matters of great national and international significance – and someone who appreciates the transformative power of universities, through their teaching and research,” Ms Flutter said to the ANU community.

Ms Flutter said she believed Ms Bishop was ideal for this role, particularly considering her commitment to education. She highlighted Ms Bishop’s leadership in bringing about the New Colombo Plan – an initiative aimed at lifting knowledge of the Indo Pacific in Australia by supporting Australian undergraduates to study and undertake internships in the region – as an example of this commitment.

Ms Bishop, the former federal MP for Curtin in WA, bid farewell to politics following a highly contentious Liberal Party leadership change, in which she was a frontrunner. She served as Foreign Minister between 2013 and 2018, and will replace Mr Evans, who was Australia’s foreign minister from 1988 to 1996 in the Hawke and Keating Labor governments.

“Gareth has served ANU for nearly a decade with incredible energy and intellect, always being a source of great encouragement, helping us realise our potential and providing wise, steadfast guidance to the University’s Council, three Vice-Chancellors and the executive leadership team,” Ms Flutter said.

“In the interim, Gareth has much still to do – including the launch today of our new Acton Campus Master Plan.”

In a pre-recorded message, Ms Bishop said she was honoured to take up the role of Chancellor of the ‘nation’s leading university’, and was looking forward to working with Vice-Chancellor Brian Schmidt and the ANU community to build on the “long and successful foundations created by so many individuals since 1946”.

Jobs for the “boys”

Congratulations to Julie Bishop. I hope she supports the annual John Gee Lecture as much as Gareth has.

Richard Flanagan should do more research because Julie Bishop was never a mother:

Tony Abbott would have been a better choice given his high achievement in education, politics and community involvement.

Can someone please explain the roll of “chancellor” and why you believe she’s not fit for this position. Thanks 🙏

Who are you to censor me Steve?? 🙃
I asked my father and he suggested that she may not be suited for the position as a right wing/ moderate ex liberal.. why do u think she’s unsuitable? I have noticed a lot of people have been expressing their concerns but not really going into detail to as why she isn’t suitable.
Thanks.

I think he might have meant that there was silence in response to your question. But think of the position as a CEO. Then question whether someone who was Deputy Leader of a political party that was actively opposed to any progress in science (economic, political, climatological, biological…) is a worthy candidate to lead that organisation.

Chantelle Milin They overlook the university. The vice chancellor does all the leg work.
A bit like a principal to a school.

What did Gareth achieve in his role for the uni?

Here I was thinking that being chancellor of an ACT University would require the incumbent to be a resident of the ACT. But there you go. I guess previous appointments have set a precedent.

I believe their is a human behind the politician .. perhaps the woman got the job , not the callous abusive politician . I’m trying to see her as a mother , sister , wife . Let’s see who she is away from Canberra mens club .

I wonder will Gareth leave the ashtray.

JBish has a penchant for travel and shopping. 2nd sentence in her pre-recorded message says “… ANU’s strong links globally…” Will she become the next Member of Manila?

There goes the last chance of CSIRO getting their budget back

Julie babes must have to supplement her meagre government pension to afford all of those clothes and shoes. Australian pensioners will sympathise.

I surpose we are paying for that to now

Bringing a reputable institution into disrepute should be a crime.

Fred Pilcher like Julia Gillard being Chair of Beyond Blue…

Will she give lectures on ethics? Or how to ignore government restrictions on post ministerial conflict jobs?

Why? What has she ever done to deserve this appointment?

Poor decision by a uni trying to curry favour with the current federal government.