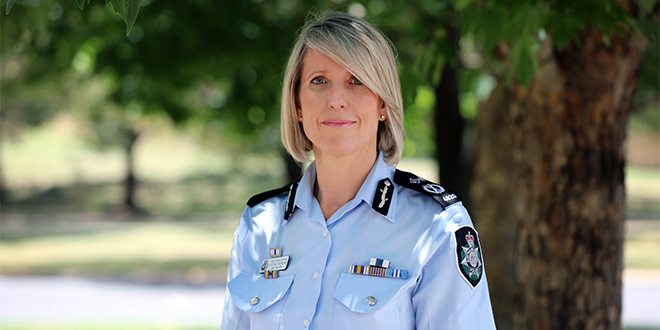 ACT Chief Police Officer Justine Saunders has resigned from her job in the AFP to take up a position at the Australian Border Force.

On Tuesday afternoon (21 August), ACT Minister for Police and Emergency Services Mick Gentleman announced Ms Saunders had informed him of her decision and thanked Ms Saunders for her “outstanding” work.

Mr Gentleman said since Ms Saunders took on the role of Chief Police Officer for the ACT in November 2016, he found her expertise and advice invaluable.

“Assistant Commissioner Saunders brought with her a breadth of experience,” he said. “Her work with ACT Policing is to be commended.

“She has begun the important process of reforming the future of ACT Policing and has also delivered strong results in combatting the criminal activities of outlaw motorcycle gangs through Taskforce Nemesis.

“I am proud to have worked with Justine and I thank her for her commitment to ensuring Canberra remains one of the safest places in the world to live.”

Since she joined the AFP in 1989, Assistant Commissioner Saunders spent more than 29 years working in community policing and national operational areas within the AFP, including drug importation and fraud.

Mr Gentleman told ABC radio on Wednesday morning (22 August) that he would be meeting with the AFP Commissioner Andrew Colvin in the next few weeks to look about the “bright young talent” for the CPO position and expects the role to be filled in less than a month.

Darron Marks - 2 hours ago
When the construction moves so will the priorities for Government to build new infastructure. And it would have been the same... View
News 18

Cary Elliot Johnson - 2 hours ago
Get out. And i was feeling positive about asking Mr Gentleman about getting a Batcave Interchange developed in Lanyon. Booooo... View
Gloria Altinger - 3 hours ago
Could have bought all Canberrans an a electric car for what they spent on the tram...... View
Ric Hingee - 4 hours ago
So why wasn't the tram also canned? View
ACT Election 11

Jason Preston - 3 hours ago
Buying your vote with your kids View
Jesse Mahoney - 7 hours ago
Y'all are arguing with someone who likes Pauline Hanson. I wouldn't waste your energy View
John Hartley - 7 hours ago
Labour drunk on money till there is none left then tax go up there a joke and have and will be for a long time View
Lifestyle 8

Scott Humphries - 9 hours ago
"Braddon of the south" . So the light industry and commercial businesses will eventually be pushed out by apartments, just as... View
Marc Edwards - 11 hours ago
And 5 minutes later the residents will all start complaining of the noise etc. Some areas should remain commercial, not every... View
Jp Romano - 15 hours ago
A great area - great building and a great developer. View
Opinion 31