Ex-ACT policewoman to be our top cop 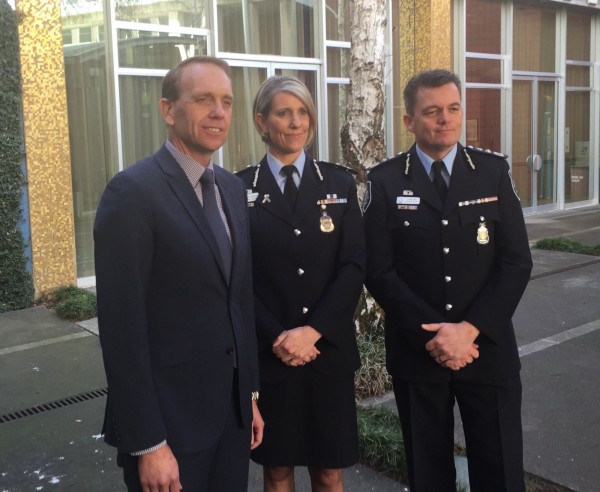 The ACT will once again have a woman as its top cop with the announcement this afternoon that Australian Federal Police Assistant Commissioner Justine Saunders will replace Rudi Lammers as the ACT’s Chief Police Officer in November.

Outgoing ACT Police Minister Simon Corbell announced Assistant Commissioner Saunders’ appointment at the ACT Legislative Assembly today together with AFP Commissioner Andrew Colvin. It may be one of the last if not the last major announcement of Mr Corbell’s Assembly career as the Government enters caretaker mode on Thursday next week and the Minister is not standing for re-election in October.

He said Assistant Commissioner Saunders brought with her 27 years of experience in the AFP.

“The first ten years were here in the community, working for ACT Policing, and subsequently [she gained] significant experience on the national and international stage, including working with the Commonwealth Minister for Justice representing the Australian Federal Police and the Australian Government at the United Nations,” Mr Corbell said.

“The AFP through the Commissioner provided us with a very strong field of candidates, and Justine I am confident will serve the ACT community strongly as our new Chief Police Officer.”

Commissioner Colvin said there was no shortage of talent within the AFP and had been no shortage of interest to fill the role of Chief Police Officer.

“Justine brings to the role a wealth of policing experience at the national, international and local level, as well as the leadership [and] the skills required to be a very effective Chief Police Officer for the ACT community,” he said.

“It’s a wonderful day for the AFP and for the people of Canberra.

“Justine is the best person and the right person for this role.” 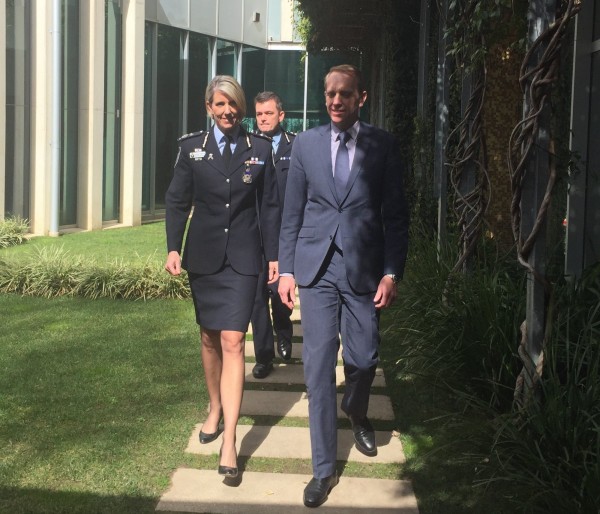 Assistant Commissioner Saunders said she was looking forward to working once again with the “professional and truly dedicated” staff at ACT Policing.

“As someone who grew up in Canberra, someone who started their family in Canberra, and my working life in Canberra and ACT Policing, it’s a real honour to be given the opportunity to lead the great police service that is responsible for keeping my community and our community safe,” she said.

“For the many years that I was away from ACT Policing, working nationally and internationally with the AFP, obviously I gained skills and knowledge, but most importantly I built relationships, which I think will be instrumental to dealing with the challenges the ACT Policing will have in the future, and let’s be honest, it’s a complex environment, there will be challenges ahead.”

Assistant Commissioner Saunders said she would continue the focus of her predecessors on matters such as alcohol-fuelled violence, family/domestic violence, road traffic safety, serious organised crime and restorative justice, with a focus on crime prevention and community engagement, particularly as they related to Canberra’s younger citizens.

“I’m sure we’d all agree, that if we can keep our youth connected in our families and in our broader community, we can reduce the risk of crime, and also the continued threats associated with national security, and the concerning age of those who are being radicalised,” she said.

The incoming Chief Police Officer started her policing career in the ACT working in a range of community policing and and detective roles in general and specialised investigative areas.

She went on to work in leadership roles in the national AFP arena, including a stint in New York as the Australian Police Advisor, Australian Mission to the UN.

She is currently Deputy Commissioner Operations, responsible for delivering operational outcomes across the organisation.

The highly respected Audrey Fagan was the territory’s last woman CPO, from 2005 until her suicide in 2007.

Assistant Commissioner Saunders acknowledged the legacy of her former colleague and others who have served in the role since.

“Audrey Fagan was a great senior leader in the AFP and across law enforcement nationally. She, like the other chief police officers in the ACT have all been fantastic in their own right,” Assistant Commissioner Saunders said.

Mr Corbell remarked upon Ms Fagan’s death following what had been a difficult period for ACT Policing in 2007 in his recent valedictory speech to the ACT Legislative Assembly.

“I can still recall the enormous loss and grief experienced across the AFP at the time,” Mr Corbell said in his speech.

“Speaking with former Commissioner Mick Keelty on the night of Audrey’s death, it was clear that some things would never be the same again, yet we both agreed that every support would be provided to Audrey’s family and the broader policing family.”

Brice Smith - 28 minutes ago
Malcolm Snow is a conservative. Got nothing to do with Barr. View
Brice Smith - 29 minutes ago
Good old conservative Malcolm Snow, strikes again. That’s the type of dumbassery we get from the Libs... View
Cary Elliot Johnson - 3 hours ago
Get out. And i was feeling positive about asking Mr Gentleman about getting a Batcave Interchange developed in Lanyon. Booooo... View
ACT Election 13

Darron Marks - 3 hours ago
When the construction moves so will the priorities for Government to build new infastructure. And it would have been the same... View
ACT Election 11

Jason Preston - 4 hours ago
Buying your vote with your kids View
Jesse Mahoney - 8 hours ago
Y'all are arguing with someone who likes Pauline Hanson. I wouldn't waste your energy View
John Hartley - 8 hours ago
Labour drunk on money till there is none left then tax go up there a joke and have and will be for a long time View
Lifestyle 8

Jess Peil - 5 hours ago
This is so exciting! View
Roland De Saxe - 8 hours ago
Great idea for Eden area View
Talla Mc Bogan - 13 hours ago
happened in the otways ,, mountain bikes took the moto tracks ,, they only use a small area though ,, so plenty of moto track... View
Property 3

Scott Humphries - 10 hours ago
"Braddon of the south" . So the light industry and commercial businesses will eventually be pushed out by apartments, just as... View
Marc Edwards - 12 hours ago
And 5 minutes later the residents will all start complaining of the noise etc. Some areas should remain commercial, not every... View
Jp Romano - 16 hours ago
A great area - great building and a great developer. View
Opinion 31

Charny Barney - 16 hours ago
Are there any more policy promises they are going to back flip on? Alistair's indecision and poor decision making is not a go... View
Sue Ellen - 21 hours ago
Elroy Jones Yes. It's one of the prettiest areas of the lake. It used to be nicer before they bulldozed all the trees on the... View
ACT Election 20

@The_RiotACT @The_RiotACT
Are you ready to try a new sport? Kimberly Lennard tells what it was like to try softball for the first time https://t.co/xElifKJU5D (4 hours ago)

@The_RiotACT @The_RiotACT
@CanberraAirport has pulled back from the brink and will return to a seven-day operation after the recent border reopenings brought back flights https://t.co/t2PIRlRLqt (7 hours ago)