In 2015, Ms Clarke was convicted under the Animal Welfare Act 1992 in the ACT Magistrates Court. File photo

A Kambah woman has been found guilty of breaching a court-ordered animal ownership ban after she was banned in 2015 from possessing any animal for three years.

On 16 April 2018, Stephanie Clarke was sentenced to 200 hours community service, a 12-month good behaviour order and 12-month animal ban after she was found guilty of breaking her previous court-ordered ban.

In 2015, Ms Clarke was convicted under the Animal Welfare Act 1992 in the ACT Magistrates Court and as a result was given a three-year animal ban to purchase, acquire, keep, care for or control any animal.

On 20 October 2016, a search warrant was issued for Ms Clarke’s Kambah residence after RSPCA inspectors received a tip-off that the defendant was in possession of two dogs.

In her court appearance last week, the 24-year-old was sentenced to 200 hours community service, 12-month good behaviour order and 12-month animal ban which will be served concurrently with her previous ban. 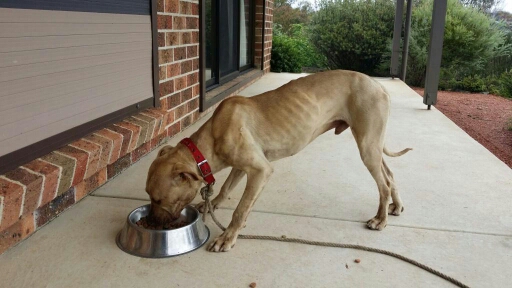 One of the dogs found in Ms Clarke’s care in 2015. Photo: Supplied by RSPCA ACT.

Magistrate Cush condemned the behaviour of Ms Clarke and said the defendant has been caught by the inspectors, having clearly disobeyed a court order.

“She was previously convicted of failing to provide food, water and treatment to an animal. This was an inappropriate number of animals in inappropriate conditions,” Magistrate Cush said.

“She had fourteen animals there, eleven months after the court order. The animals were found in conditions best described as disgusting and unhygienic.”

RSPCA ACT Chief Executive Tammy Ven Dange said the aim of the bans was to prevent animal cruelty in the first place.

“We believe that animals bans are the only really effective part of a sentencing in these case as it can actually prevent animal cruelty in the first place,” she said.

“It deters others from offending and prevents guilty parties from being in a position of hurting another animal for a period of time.”

The outgoing CEO said the current legislation had loopholes and challenges to enforce bans effectively.

“Unfortunately, right now, the legislation has too many loopholes, and the courts apply and enforce these bans unpredictably and inconsistently,” she said.

“We have been working with the ACT Government to fix these issues, and hope that we might see improvements to the legislation to be tabled and passed by the end of this year.”

This is also the first time that an animal ban breach has been successfully prosecuted in the ACT under the Animal Welfare Act 1992.

These disgusting oxygen thieves go to court and get sentenced and still continue to get more pets and do the same again. I think our punishments don’t fit the crime. Very disappointing.😡

Don’t feed her and put her in a flea infested room!

Roc Cecere of course she should!

Another animal ban because the first one worked so well! 😡

This is one of those rare situations where doxxing may be the ethical thing to do. The community needs to keep tab on this woman because the legislation doesn't cater for authorities to do it.

Can we please have some more active monitoring of this lady, like random checks every month?

There may be a very good reason why the magistrate was forced to give her such a lenient punishment, but to the average person it seems that she is being banned from owning animals when she has a history of ignoring such bans and the rest of the punishment is a slap on the wrist. The animal ban is also concurrent with her current one (though there may not be much of that left) so it appears that some of her punishment is in name only with no real effect.

If magistrates don’t want the community to force mandatory sentencing on them and override their powers to determine punishments then they really need to improve their sentencing.

With decisions like this, it isn’t the community’s fault that mandatory sentencing becomes popular, it is the magistrate’s fault.

She should serve time!

She shouldn't be allowed animals period....

Disgusting. So she serves 'concurrently' that in effect means nothing for the current breach. And more animals suffer 😡

Kambah's new Zoo by the sound of it

1967 - 3 hours ago
Yup. Hospital cleaners should be paid more. But, One of the mote concerning tbings in this article is that the drivers are on... View
Acton - 3 hours ago
Why the silence and inaction from the Greens/Labor ACT Govt? Why is this newly elected government doing nothing to resolve th... View
Community 22

Clare Jones - 5 hours ago
Why say these are open when the two we've been to still have temporary fencing and one even still had a tractor inside the fe... View
Business 5

Tennis ACT - 6 hours ago
What a great achievement Snedden Hall & Gallop! View
Martyn O'Connell - 19 hours ago
the 333 bus painted up to look like the XPT View
Katy Did - 21 hours ago
I loved that tram when I worked in Civic View
Opinion 16

Rodney Thompson - 8 hours ago
Someone who actually deserves a payrise. View
Opinion 55

Ashley Wright - 9 hours ago
Chris Olsen actually Clinton was right. William Hovell drive had the limit lowered between Coulter Dr and Bindubi street beca... View
Tolga Altinbas - 11 hours ago
Because one is a roadwork sign. And the other one is always there on the pole View
Wang Chow - 13 hours ago
My guess is that they changed the speed limit in Chisholm/Richardson because its cheaper than putting in more speedbumps that... View
News 21

Darron Marks - 15 hours ago
"But in this world nothing can be said to be certain, except death and taxes" View
News 4

Bill Gemmell - 16 hours ago
Additional well-located transport infrastructure is a plus. However, maybe they should be thinking about covering these with... View
Greg Batten - 19 hours ago
Great idea for both ACT light rail and bus networks. View
Ashley Wright - 20 hours ago
Justin Watson it is, the article has that a bit wrong as the “new” stop is at Sandford Street intersection about 1km away... View
Opinion 22

Julie Macklin - 18 hours ago
Many other countries don't have the unpopulated distances that we do. It's a different matter driving an electric car in Euro... View
Lifestyle 1

@The_RiotACT @The_RiotACT
Experts advise people living in the ACT & surrounding regions to be on high alert for grass & crop fires this summer https://t.co/g2KJ0Yo9nP (31 minutes ago)

@The_RiotACT @The_RiotACT
The ACT has adopted the new three-tiered Australian Warning System. Find out about the new symbols and what they mean https://t.co/14KXL4E4NZ (2 hours ago)

@The_RiotACT @The_RiotACT
In a horror year that’s brought almost every catastrophe to our door bar locusts, the disruption of Canberra's garbage collection services is probably not a big deal, writes David Murtagh – except it is https://t.co/KCu20ZKXYP (3 hours ago)