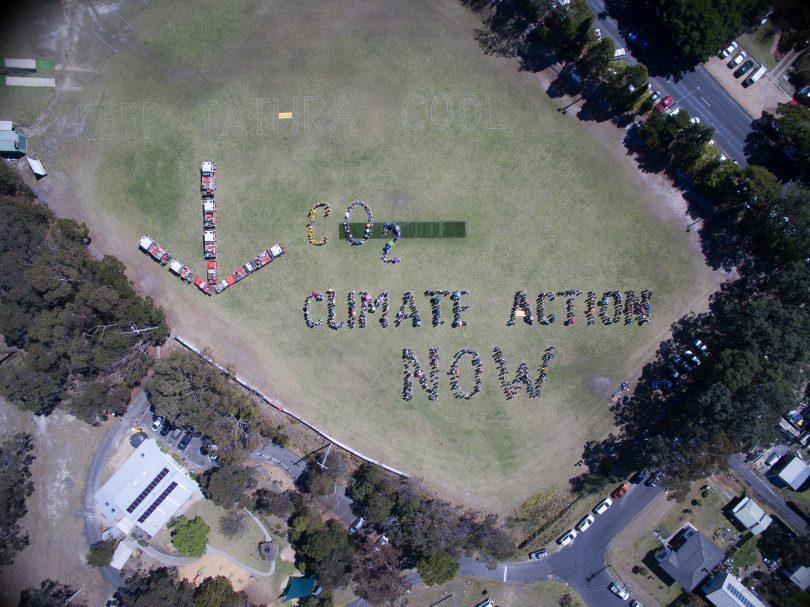 Frustrated by inaction and squabbling on climate change 12 years after they first took a stand, the Tathra community has again come out en-mass to lead the discussion and advocate for the future.

With Dr Matthew Nott, the founder of Clean Energy for Eternity directing the traffic, hundreds of people turned out on Lawrence Park on 30 September to create a human sign that spoke not just to the atmosphere above that could see it best but more so our political leaders.

“It’s 2006 since we did our first human sign on Tathra Beach, today was bigger, bolder, and more beautiful,” Dr Nott says.

“Today’s sign is born out of frustration, we did our sign in 2006 because we were frustrated by the lack of government action and now it’s even worse. 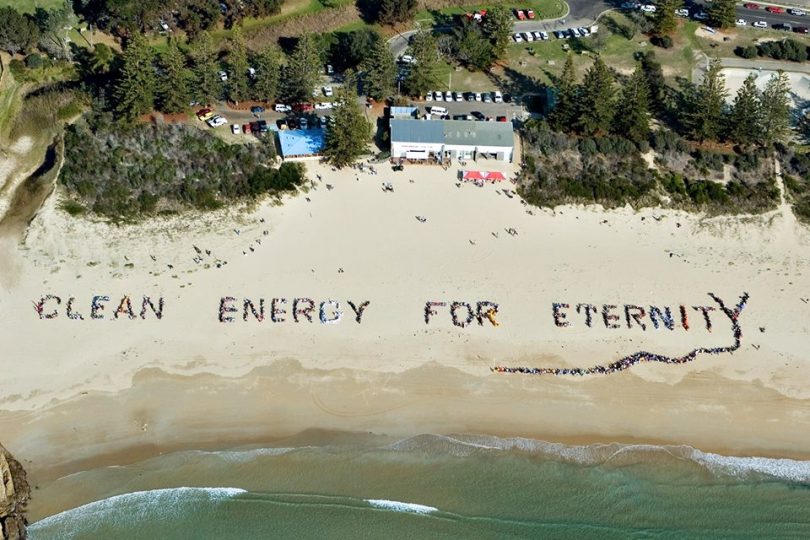 Much of the inspiration for the 2018 sign came from Tathra Public School students who created the phrase ‘Keep Tathra Cool’.

Six short months ago as the families of Tathra sheltered from the flames of the devastating March 18 bushfires, Tathra Public School was rumoured to have been destroyed. The flames of that day came into the playground of the school, only to be held back from classrooms by the speedy action of mobile crews from the National Parks and Wildlife Service.

Sixty-five homes weren’t so lucky on that mid-autumn day, and the experience has energised the town once again around the issue of climate change. 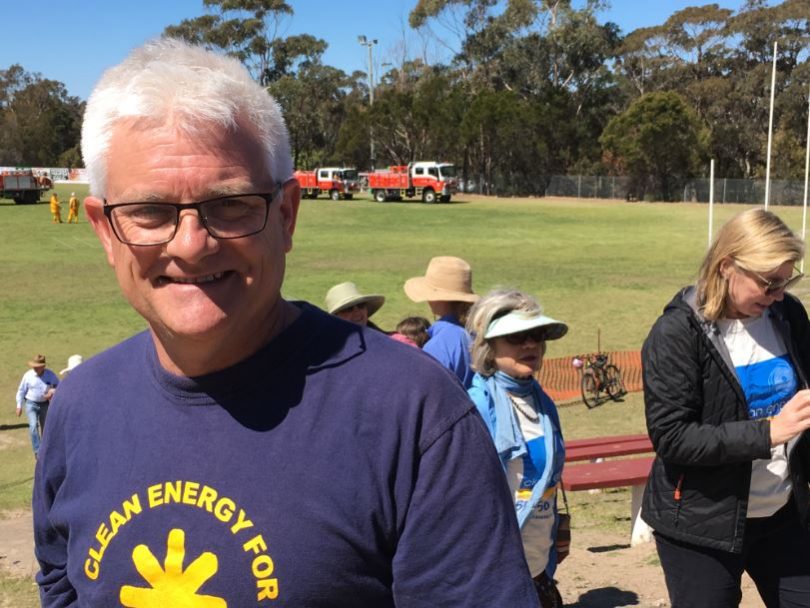 Since the formation of Clean Energy for Eternity (CEFE) in 2006, every community building in the town has been fitted with solar panels; from the surf club to the bowling club, to the school and Aussie Rules club, all the result of community fundraising inspired by CEFE.

The intent of the community who gathered on Sunday to spell out the massive message was clear.

“I think the only way to get climate change sorted is for everyone to work together and that is what we are doing today,” says Ash, who was helping make the letter ‘C’.

“Climate change is such a serious threat,” says Amanda in the letter ‘M’.

“The bushfire season being extended into autumn and winter surely should be a wake-up call for everyone.”

“I am here to support Tathra after the fires, I think it’s important we are all aware of what’s going on here and around the world,” Cas from Melbourne in the letter ‘T’, says.

“I want to be a part of this campaign, I want to help get the message across, this needs to be done,” says Denis, helping form the letter ‘A’.

I am always so inspired by the people who live in my hood.

The presence of the NSW Rural Fire Service added significant weight to the message and took the issue beyond the ‘hippy, green, activist’ roots some have used to underline earlier protests.

Eleven fire trucks from brigades at Candelo, Tanja, Tarraganda, Jellat, Tathra, and more were a key part of the display.

“I rang up local Fire Captains and said ‘look we need a couple of fire trucks to form a human sign‘ and they said what time do you want us there?” Dr Nott says.

“Fire Control gave us the go-ahead to use the trucks; its a great symbol, as the planet warms we are going to experience more frequent and intense bushfire events, we need to look after the RFS.” 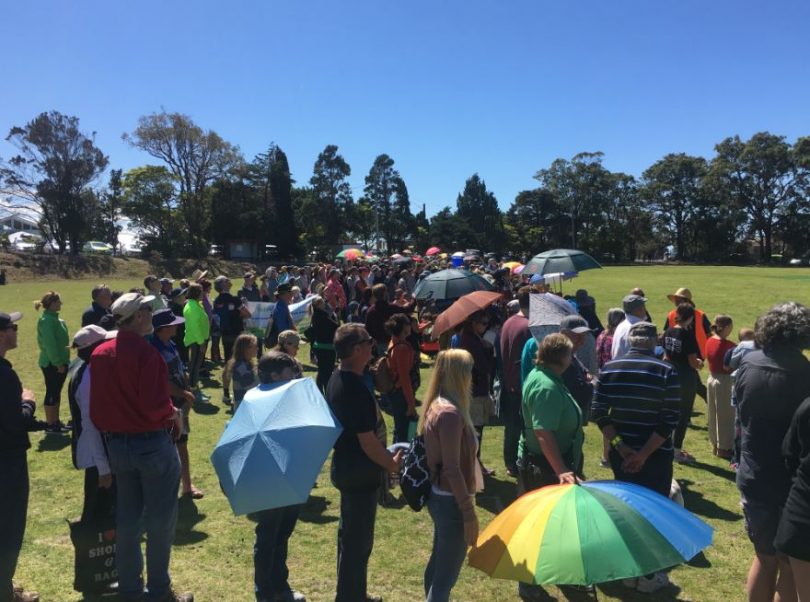 On the ground in the middle of the human sign on Lawrence Park, Tathra. Photo: Ian Campbell.

The Australian boss of advocacy group 350.org was also on hand to help spell out the human sign. Blair Palese, who has a holiday house in Bermagui says Tathra has been hit hardest by climate change, more than a lot of communities in Australia, yet has done more than most in terms of focusing on the solutions.

“This grassroots level is really working right around the country, we are really just lacking the policy leadership at the top.

“In many ways, people are just getting on with it,” she says.

When it comes to the inaction of government, Ms Palese believes the influence of money is at play.

“It’s the history of coal and gas in our economy, it’s very hard to stand up against that when there is money coming in as donations and you constantly have lobbyists in your ear saying – ‘we need more coal‘.

“People in the community don’t have those interests and they know how to get on with the solutions and make it work.

“Get involved in the run-up to the election and make sure climate is the main issue on the agenda, if we deal with it now we can deal with it.

“Poll after poll says people just want to work on solving this problem, collectively we have to put pressure on government and get it happening,” Ms Palese says. 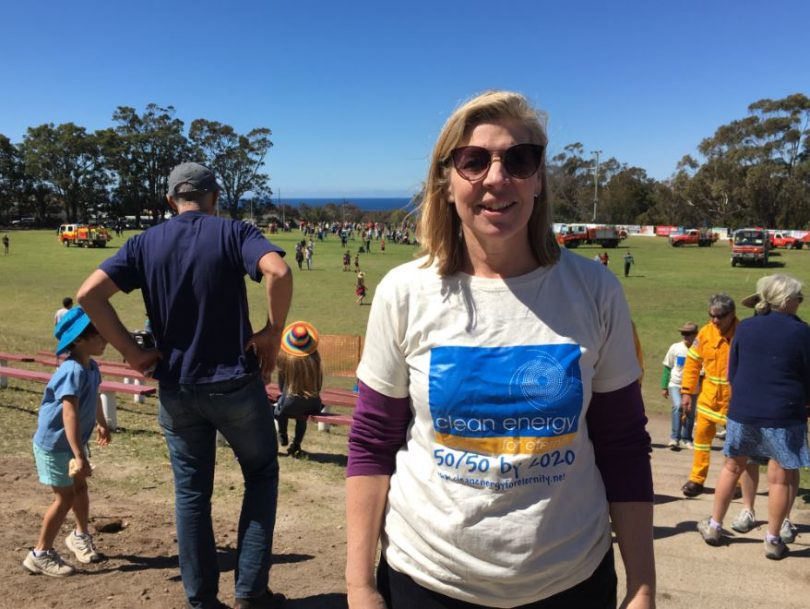 Part of the success of Sunday’s human sign came from the 250 people who took part in the community bike ride from Bega to Tathra beforehand, many of whom stayed on to take their place in one of the letters.

Increasing fossil fuel free transport is one of the motivations that drive the Bega Tathra Safe Ride Committee forward with their ambition to construct a bike track between the two towns.

Dr Matthew Nott who, outside of replacing knees, hips and elbows in the operating theatre of local hospitals, remains just as steadfast today as he was 12 years ago when he organised the first human sign.

“What we are calling for is a bipartisan approach to the threat of climate change, in South East NSW we are proactive about climate change and we know that it brings great rewards to the community,” he says.

“Politicians of all colours and stripes need to come together and come up with a meaningful solution that is going to help protect our region from climate change.”