“The big thing for me when I opened my eyes was, I had such clear focus on what I wanted to do, what I needed to do and the belief that I could do it. And I just carried that into the throw.”

Kelsey Barber’s eyes sparkle and her face glows as she describes the electric moments leading up to her World Championship win.

Competing at this elite level and becoming the top female javelin thrower in the world has taken more than physical training; there is the mental resilience, goal setting and following through of a game plan.

“Goals are a big part of training. I sat down years ago and wrote down my career goals. It’s one thing to say ‘these are my goals’ in your head, but to write them – you are expressing your desire.

“Big picture goals are more direct than in-season goals and weekly training goals. It helps put everything in perspective when things aren’t going well day-by-day in training; you can step back and say, ‘what’s the bigger picture?'” 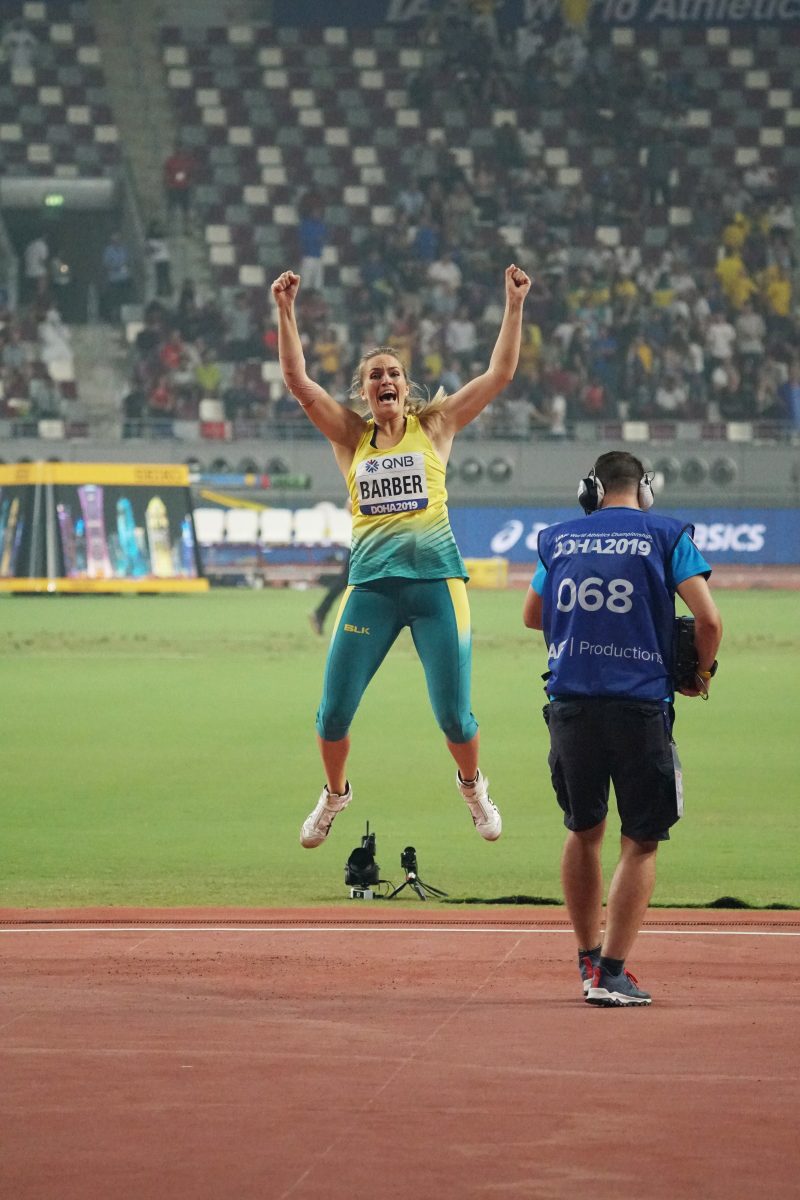 The magnitude of the win begins to sink in!

Kelsey delights in every aspect of the sport, even the five days a week of strength training in the gym. Her coach/husband Mike includes conditioning training, water running and a variety of other activities to keep the training interesting.

“I just love it. When you enjoy it as much as I do, it’s easy to keep going. Not only do I enjoy the competition side of it, I love the training. I’ve come to training every day this past week and been like, ‘I love this!'”

Kelsey is careful to maintain life balance, yet even in her downtime she enjoys working through a process.

On weekends, she relaxes by getting out a cookbook and planning out meals for the week, admitting, “I’m an organised, methodical cook; definitely, not a hurricane in the kitchen!”

“When I have extra time and energy, I love cooking. Mike and I love the spice and freshness of Thai food. I just put in a veggie garden over the weekend. I need to be outdoors, go for a walk, or take time to sit by myself, be in my own thoughts. And I enjoy going out for coffee. Two before 10 [a Canberra cafe] know me well.” 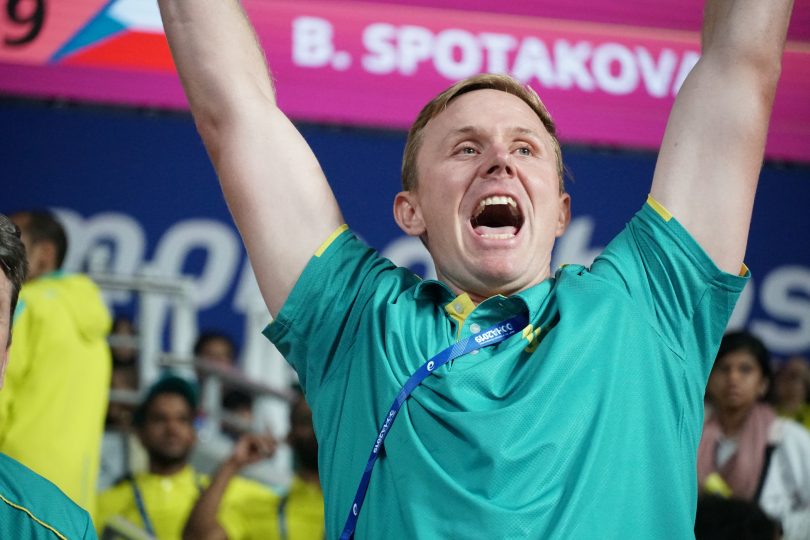 Mike’s reaction to that winning throw.

How does the training change as she and Mike approach a championship?

“The training tapers off as we get close to major championships. Everything is done with purposeful movement; we focus on each aspect. Throwing becomes the emphasis.

“Coming into those world championships; you don’t want to focus in too quickly, otherwise you can go down a rabbit hole of overthinking.

“Day-by-day leading up to the comp, you know the process of what you want to do in those last few sessions. The processes that you take into the comp should be very much the same; remembering that what I have done well all season still stands and I need to take that in with me. 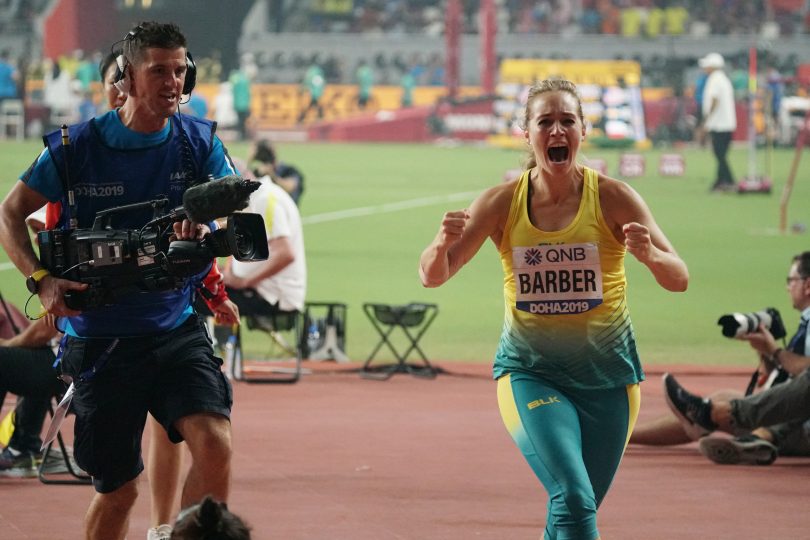 Elation and so many other emotions being felt in the moments after Kelsey’s winning throw.

“In Doha, I had been frustrated with my qualifying throws the day before the finals. So, for that 6th-round throw in the final, I used the crowd for a little bit of energy. It was the last round, so let’s give them a show.

“But I turned around and paused to close my eyes and really internalise everything again before I took off for that run. It was key that I took that moment at the top of the runway to enjoy the energy it brought, but then bring it all back to a single focus on the runway.

“Using positive language and mindset and making it be process-driven rather than result-driven is so important. You have one more opportunity to let your body do what it does really well. You need to find that element on the runway which I do really well when I stick to my process.”

“I let it go. I felt the javelin snap off my fingers and knew it was going to go far. It kept going and I saw it fly over the 65-meter line. That’s when I got really excited. The medals were sitting around 65 metres. I am in with a chance here!”

“There was this moment of pause. The first thing I did was run towards Mike who was on the fence, but I couldn’t get to him. The next best thing is having someone throw you the Australian flag!” 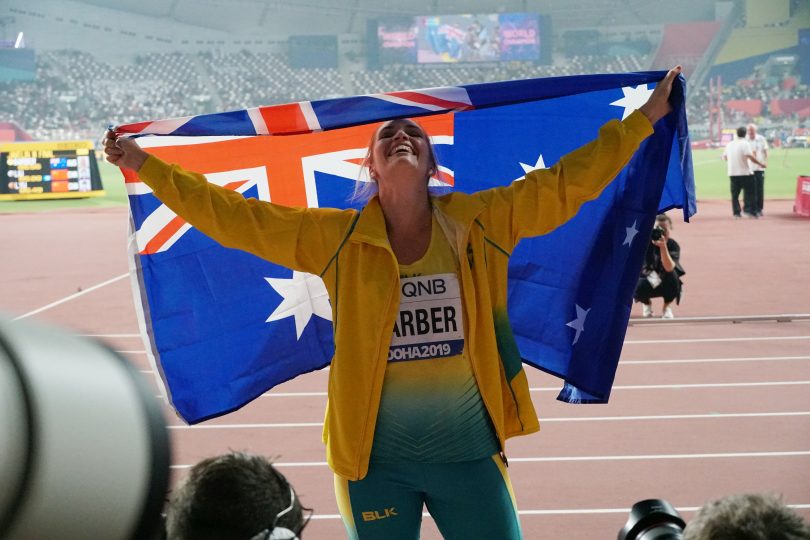 Kelsey wrapped in an Australian flag.

As she sets her sights on the 2020 Olympics, Kelsey’s preparation, her grounding, and her goals are rock solid. She credits much of that to the hard-working team behind her throws; those who best prepare her: sports psychologist Renee Appaneal; her physio Ben Raysmith; head coach Craig Hilliard; and her coach, Mike Barber. She is also thankful for the support of her biggest fans: her dad, Keith, mum Bev and sister Mikaela.

May Agnew - 15 minutes ago
I am being blocked from SHARING my above comment -not allowed to speak the truth these days --WHAT NEXT ?? View
May Agnew - 18 minutes ago
Turning the beauty of Canberra into a concrete jungle now and to think that so many hard workers who built this beautiful cit... View
Jamie Peterson - 4 hours ago
This article is the same as a puff piece for Andrew Barr 😂😂😂😂😂😂😂😂😂😂😂😂😂😂😂😂😂... View
Lifestyle 65

HiddenDragon - 6 hours ago
The attractiveness, or at least acceptability, of online learning for international students will surely depend on whether th... View
Janet Mulgrue - 6 hours ago
I did my masters by correspondence before the days of online study. I found it great as I was also working full time. I was a... View
Anissa Jones - 7 hours ago
An article written by a non-teacher commenting on educational practices. What’s wrong with this? Hrmmm Could it be he has n... View
Community 2