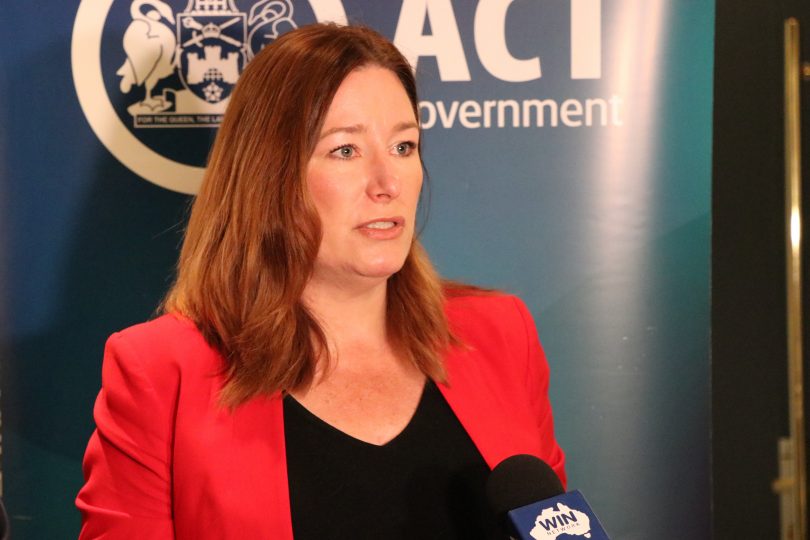 Housing Minister Yvette Berry speaking to the media during the summit. Photo supplied.

The ACT Government has disappointed community advocates by failing to commit funding for emergency accommodation for the homeless at today’s Housing and Homelessness Summit despite Canberra’s high homelessness rate and increasing demand on community homeless services.

The summit has also disappointed those hoping for a large-scale commitment to providing affordable housing, with the ACT Government announcing just $1 million for a Housing Innovation Fund to seed new affordable housing initiatives.

Safe Shelter ACT Co-ordinator Richard Grittiths said he was disappointed there was “nothing for homelessness services” in the government’s announcement at today’s summit.

It has been calling for more permanent emergency accommodation for the homeless but Mr Griffiths said that the Government failed to cover this issue in its announcement and that the issue of homeless services was only discussed in breakout groups at the summit.

ACT Council of Social Services Director Susan Helyar welcomed the government’s initiatives and its commitment to implement the Labor-Greens parliamentary agreement on the issue but was disappointed at the small scale of what they were offering in terms of affordable housing.

Ms Helyar said the ACT needs thousands of affordable homes but the government was only delivering a small amount – perhaps in the hundreds – and leaving the rest to the community and industry.

“They haven’t put the kind of scale of money or intervention needed to deliver what the community is after,” Ms Helyar said.

Around 200 Canberrans came together for the housing summit, which Ms Berry said was the culmination of months of consultation in which the ACT Government and the affordable housing advisory panel reached out to thousands of Canberrans regarding housing issues.

Ms Berry said the three main initiatives she announced were a direct result of the community’s input.

“These initiatives have strong support from across the housing sector, but more importantly, they will be implemented with ongoing consultation and alongside future initiatives as we develop a new housing strategy,” Ms Berry said.

“As part of the announcement the government is seeking expressions of interest from organisations to lead these pilots,” Ms Berry said.

Ms Berry said this will be the first time the ACT will have an annual target and it will be set under the government’s recently passed land development and city renewal legislation.

“Before the end of this financial year, 530 sites will be released for affordable home purchase and public and community housing – a combined increase of 240 sites on what the previous affordable housing policy would have yielded,” Ms Berry said.

“The establishment of a new annual target provides the opportunity to widen the focus to affordable housing options in the public, private and community rental sectors and to work with community housing providers, builders, estate planners and our own public housing authority in growing these targets in future.”

Ms Berry said that Canberra community, through its ownership of land, provides a large subsidy for each discounted block.

“It’s vital to make sure these blocks go where they’re most needed and that the release of affordable land is fair and equitable,” Ms Berry said.

“That’s why future affordable home purchase will be made available only to households pre-registered on a new ACT Government database.”

Ms Berry thanked the thousands of Canberrans who have contributed input to the summit and said the summit fulfilled the Labor-Greens Parliamentary Agreement commitment to hold a summit on housing and homelessness in 2017.

Elspeth Shannon Rollason - 7 minutes ago
All these buildings. If families move here then where are the playgrounds for kids to be active? What is being done about saf... View
Zahidul Alam - 14 hours ago
Timmy Holness so true. Builders and developers who are related to the planners 😂😂😂 View
Ian Brown - 14 hours ago
Belconnen harbour View
Opinion 132

May Agnew - 3 hours ago
MOST DEFINITELY -so many homeless -a national DISGRACE -and wealthy developers becoming wealthier still - causing a concrete... View
George Watling - 7 hours ago
A recent OECD review of 300 Urban Planning studies from across the world has demonstrated that increasing the compactness of... View
George Watling - 8 hours ago
This story is not based on evidence or research. Higher density planning policies have been driving up property prices around... View
Community 7

chewy14 - 9 hours ago
And the m9ney is going to be completely used up in one day. Honestly, this is beyond a joke how incompetent the ACT governmen... View
News 18

@The_RiotACT @The_RiotACT
Photographer Sammy Hawker's engagement with the environment has created beautiful images that use salt water, rain and earth to evoke a changing world https://t.co/9oVmYTwl62 (9 hours ago)