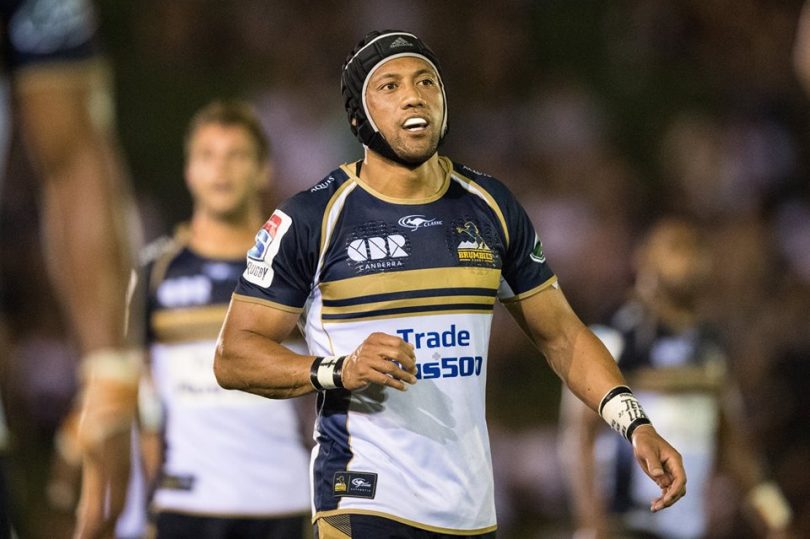 Christian Lealiifano of the Brumbies during the trial match against the Chiefs at Sunshine Coast Stadium. Photo: Supplied by RUGBY.com.au/Stuart Walmsley.

Christian Lealiifano will lead the Brumbies out in their opening match of the campaign against the Sunwolves in his first start in Super Rugby since the quarter-final clash with the Highlanders back in July 2016.

The Brumbies announced a strong side for their first fixture of the 2018 Super Rugby season as they prepare for their match in chilly Tokyo on Saturday afternoon.

Four players will make their Brumbies debuts in the starting fifteen with lock Richie Arnold, flanker Rob Valetini, number eight Isi Naisarani and winger Chance Peni all making their first starts for the ACT side.

One of the most highly touted young prospects in Australian Rugby, Rob Valetini, will line up in an all-new look back row alongside Naisarani, with former Olympic Sevens star Tom Cusack making his first start for the club, having been a replacement on his rare appearances in 2017.

The 19-year old hailing from Melbourne became only the seventh player to sign a Super Rugby contract whilst still in high school, joining the likes of Kurtley Beale, Quade Cooper and James O’Connor in an illustrious club.

Richie Arnold will partner club co-captain Sam Carter in a mobile and powerful second row, with Ben Alexander and Allan Alaalatoa packing down either side of hooker Josh Mann-Rea, as Scott Sio remains in Canberra nursing a minor niggle.

Henry Speight and new-boy Peni will run out with 2017 breakthrough star Tom Banks in a back three that should provide plenty of speed.

New scrumhalf Matt Lucas is named amongst the finishers on the bench with Lachlan McCaffrey also poised for a return to Super Rugby action in Brumbies colours, following a spell overseas at London Welsh and Leicester Tigers.

Following a pre-season campaign that saw a comfortable win over the Rebels in Queanbeyan and a good second half display against the Chiefs on the Sunshine Coast, hopes are high for the squad who landed in Tokyo on Wednesday morning.

You can catch the Brumbies against the Sunwolves from 3.15 pm (AEST) live on Fox Sports this Saturday (24 February).

Memberships for the 2018 Super Rugby season, which includes eight home matches, including games against the Waratahs, Hurricanes and Crusaders, on sale now.