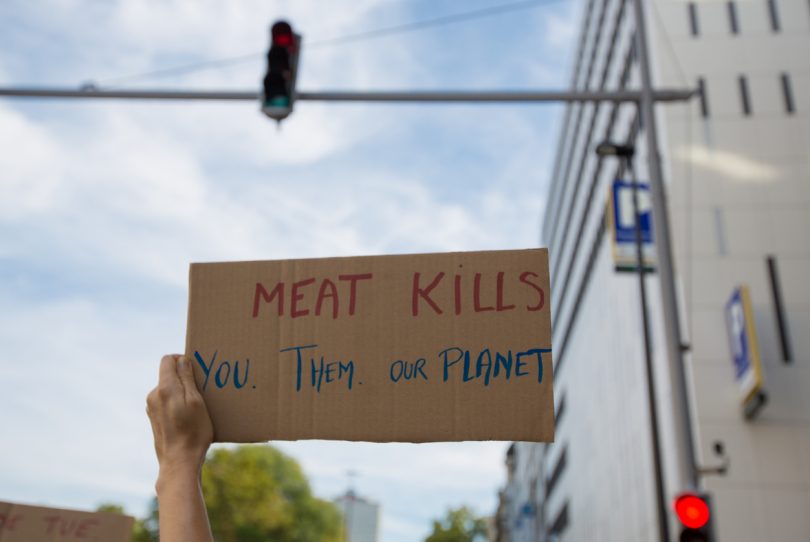 Strengthening trespass laws: a meaty cause or no bite?

The Canberra Liberals are calling on the ACT Government to beef up its trespass laws to protect local businesses from “vegan vandals”, prodding the Government to follow in New South Wales’ footsteps.

The Federal Government called on the state and territory governments to strengthen their trespass laws after a spate of demonstrations on farms and abattoirs over the past 18 months, including a protest at a Goulburn abattoir.

Under the new laws, which came into effect on August 1, people who illegally trespass onto farming properties will face an on-the-spot fine of $1,000, with fines of up to $220,000 for individuals, and $400,000 for groups and corporations.

Mr Wall wants legal protections for all forms of animal-related businesses in the ACT, including wildlife parks and research facilities.

“There should be no place in the ACT for vegan vandals who incite and commit crime,” Mr Wall said.

“The ACT is home to both the CSIRO and a number of animal-related businesses including primary producers, wildlife facilities and research facilities that could be a potential target for this kind of illegal activity.

“People who are lawfully operating an animal-related business in the ACT should be able to do so with legal protection from these vegan vandals.

“The Government needs to send a clear message that there is no place for this kind of criminal activity in the ACT like we have seen over the border.”

When asked if Canberra had a history of activism, Mr Wall recalled an incident that occurred in 2011, where a number of Greenpeace activists climbed a fence at the CSIRO and cut down a field of genetically modified wheat which was there for research purposes.

“We have seen NSW lead the charge,” Mr Wall said. “The ACT is an island within NSW and it only makes sense to follow suit otherwise we risk becoming a destination for this kind of activism.

“There has been a history of these activities within the ACT. The ACT is not immune to this kind of behaviour and we should have stronger laws and have stronger penalties in place to act as a deterrent from it.

“We are not saying no to protests. Feel free to protest at the farm gate, just don’t cross it.”

“One of the things that is very clear is that people do have a right to protest,” Mr Ramsay said.

“One of the key things in this Government is that we go on evidence-based decision making and not ideological scaremongering that happens far too often from the Canberra Liberals.

“There is no evidence that any further legislative reforms are needed in the ACT. Mr Wall is talking about something that took place eight or nine years ago. If that is the closest he can come to in terms of evidence of laws that are needed in the ACT, it shows that he is not driven by evidence.”

There is no need to legislate against someone holding up a cardboard sign. ‘Vegan Vandals’ indeed. We need to be protected from polluting, tax evading big business vandals, how about focusing on them.

I recall that Shane Rattenbury commented in support of the CSIRO trespass incident, where students had their research trashed and their academic careers set back by years. Irresponsible of him.

The farmers and other ‘animal related businesses’ who operate ethically, legally and honestly don’t get visits from activists. So maybe the ones in the wrong here are not the activists? Food for thought for many who fall for the hype…

Suzanne Tunks ah yes they do.

Suzanne Tunks so when they decide to have a sit in protest at a steak restaurant, so said restaurant must be operating illegally or unethically?

Ben Jones have they been doing that in Canberra?

Suzanne Tunks so your statement only applies to Canberra now ?

Ben Jones it always did, the post is about the Canberra liberals wanting to bring in new rules for Canberra.

Ben Jones When did that happen in Canberra?

why would we need a specific law for vegans? next you’ll be pushing for laws against climate change activism.

Ben Foley they already are 🙁

Ben Foley because vegan activists trespass onto private land and there is not a strong enough deterrent currently.

Gee Jay what if other activists trespass into private land? Should they be treated better then vegans?

What if you’re a vegan but not a vandal? Or a vandal but not a vegan? Or neither a vegan nor a vandal? I don’t think this policy has been thought through.

Tackling the big problems. As always. 🙄

I wish the Libs would stop intentionally equating veganism with vandalism and thus trying to portray veganism in a negative light. They’re being irresponsible here especially as climate scientists are proposing that the world needs to move away from eating meat to a predominantly plant-based diet. Can the Libs please spend more of their time promoting renewable energy and other environmentally-friendly initiatives?

Are you serious? Many of us refused to vote Labor in the last election because we didn’t want a reactivation of “climate change” and higher taxes to fund renewable energy (expensive and causing blackouts). People like you tried for years to shame us into giving up meat by evoking images of cuddly animals. Now you are using “climate change”. Vegan protesters are unstable and disturbed and it is essential that our laws and penalties catch up with NSW. We don’t want a bar of nutritional deviance and terrorism. If Labor doesn’t change the laws and the Liberals promise to, then they’ve got my vote.

They are addressing vegan vandals not all vegans.

John Moulis … who cares who you voted for John? The Labor/Green coalition went on a platform of renewables and won the right to govern for 3 years. Similarly they are well within their rights to consider whether the trespass laws need tightening or not. It’s got nothing to do with “nutritional deviance” (whatever the hell that is!!!!) it’s actually about protecting the rights of all sides – the law abiding producers and the law abiding protesters … anyone on either side who transgresses the law should be dealt with accordingly. Oh and when you say “We don’t …” you mean you – I didn’t elect you to speak on my behalf!

Probably wouldn’t be an issue if the current laws were actually enforced, rather than just letting repeat offenders of tresspass, break and enter, vandalism, stock theft etc get away with a slap on the wrist.

Go be vegan all you like. Do it while not breaking the law and thinking you have a right to enter somebody elses property, steal, or commit criminal damage.

And we need better laws to penalise employers who steal wages. While current trespass, break and enter and damage laws are adequate, the liberals want to make s police state. Will the liberals support better laws covering wage theft? If no, this naked these liberals hypocrites. https://www.canberratimes.com.au/story/6327114/wage-theft-crisis-more-than-half-of-young-canberrans-underpaid/

Are these the same Liberals who were opposed to introducing exclusion zones for anti abortion protesters?

Tbf, Freedom of expression and freedom of assembly has no limitations so it would technically be unconstitutional. Just food for thought on that argument

Pesky bloody do Gooders,vegan is a little close to virgin for me, they need rebranding!! Boom boom!

🤨 There are about 5 farms in the entire ACT?
Are the Libs worried they might take some lab rats from ANU? That seems quite implausible.

Or you could deal with climate change or the increasing homelessness.

Or the stolen generation of the 21st century

Can this be extended to fracking and coal mining destroying farm land?