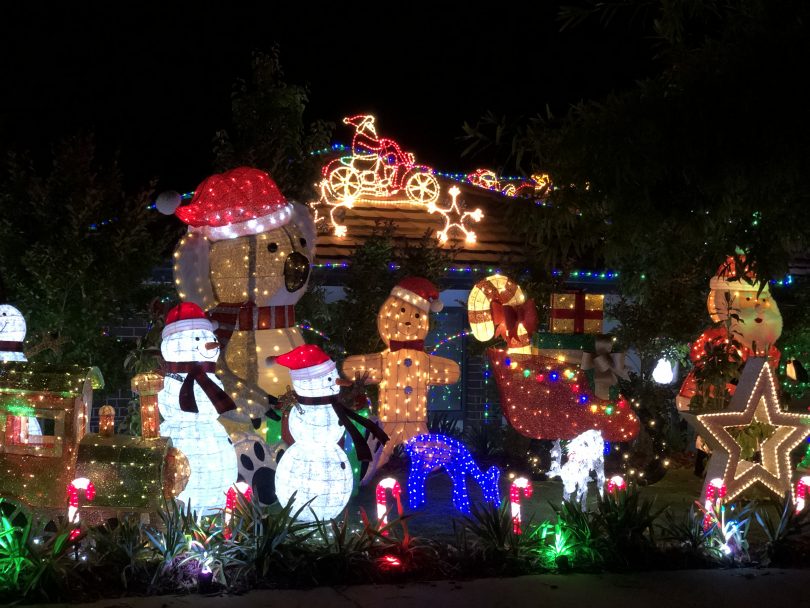 ‘Twas a few nights before Christmas and in the Canberra suburb of Wright, the lights were shining bright at the O’Brien’s house. Photo: Graham Tidy.

Melanie O’Brien was recently out the front of her Wright home watching the people who had come to see her family’s spectacular Christmas lights display.

Thousands of lights, Christmas cut-outs – including a special appearance by Bluey – and a festive moving village had drawn lots of visitors.

“There was one lady out there – I think she would have been in her 90s – and she was crying,” says Melanie.

“She said she used to put up lights when she lived in Bombala, but doesn’t have anyone to put them up for her anymore.”

For Melanie and her husband, Sean, this is why they spend months prior to Christmas decorating their Molonglo Valley home.

“It’s so touching to see people’s faces light up when they see it,” she says.

“With COVID-19, we had a lot of time to think about the display we’d do this year. We really wanted to brighten things up for people.

“When you see lights, you see happiness.”

Melanie and Sean have been decorating their home since they moved to Wright in 2014. That first year was little more than some solar lights on the house.

“But they didn’t ever come on until quite late at night,” she says. “The next year we got some fairy lights and lead lights instead, and every year after it just got bigger and bigger.

“We tend to buy new decorations every year, usually at the post-Christmas sales.”

This year has been a little different for Melanie, with the need to make things a little brighter for people. She has invited visitors to the display to make a donation to The Salvation Army Christmas appeal.

Sean says one of the display’s greatest fans is their six-year-old daughter, Annabelle.

“She loves to go out and welcome people,” he says. “Then she asks them whether they’ve made a donation.”

Sean says he wasn’t really one for lighting up the house until the family moved to Wright, but it has certainly grown on him.

With the help of a mate – “He’s more agile than me,” says Sean – they take to the roof to fix colourful lights, and this year they started in mid-October so they could include a Halloween show, too.

“What I like is it brings people together,” says Sean.

“Friends, neighbours, workmates – they all come around to have a look. It has also inspired other people to put lights up. We’ve lent some of our lights to other people so they can put up a show.”

Sean says there are several thousands of lights on his house this year, although he’s not counted them.

“I do know we’re using 35-40 power points, but we have solar power so it costs us nothing,” he says.

The highlight of the display is a Christmas village complete with moving train, North Pole mail room, Mrs Claus’s kitchen “where everything is made with love”, a lolly shop, merry-go-round and even a Ferris wheel, which has been built on a large table which can be wheeled out at night for visitors to see.

With so many lights and moving parts, Sean got an electrician in to check it is all safe.

The O’Brien family’s Christmas light show is at 44 Lindsay Pryor Street in Wright. It will remain up until Boxing Day on 26 December.

There is another Xmas display in Beilby Place, Kambah. It’s almost as big and it does look great. Noting that it isn’t ours but it is across the road from us.

Thanks for letting us know Tim. Happy Christmas.