Likes and dislikes from the weekend of Canberra sport 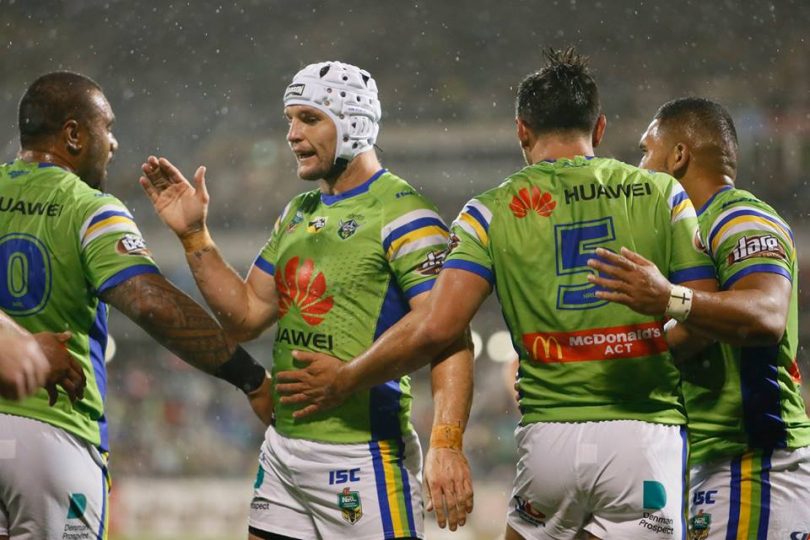 There was a lot of sport that took place in Canberra this weekend and some local Canberra athletes plying their trade around the world.

Lachlan Roberts from The RiotACT was across all of it and has come up with his list of likes and dislikes from the weekend’s action.

Canberra Raiders gave Josh Papalii and Blake Austin a chance to redeem themselves on Saturday night after both were dumped from the side.

Raiders coach Ricky Stuart dropped five-eighth Austin and Origin star Papalii to the NSW Cup in the hopes that it would spark their season into life.

Both men scored tries and impressed in defence in the 18-2 victory over the winless Parramatta Eels at GIO Stadium on Saturday night in a perfect comeback story.

The Green Machine will travel to face the South Sydney Rabbitohs on Saturday afternoon and it remains to be seen if the Raiders’ resurgence will continue for another week.

2. Tuggeranong United top of the table

Tuggeranong United came into the match against last year’s champions Belconnen United on the back of a two-match winning streak. But Belconnen at home was a whole other test.

A strong performance from the Tuggeranong side upset the fancied Belconnen United 2-0 at McKellar Park and has the Tuggers boys three from three and top of the table.

A new look ladder and upsets galore has breathed a breath of fresh air into the competition where anyone is capable of causing an upset.

Tuggeranong United’s next match will be in the FFA Cup against NPL second-place Woden-Weston on Wednesday night at Greenway.

Tuggeranong fullback Brendon Taueki’s return to rugby union has taken off after his 34-point haul against the Gungahlin Eagles on Saturday.

The Vikings destroyed the Eagles 66-24 at Gungahlin Enclosed after a devastating 59-point first half.

Taueki is back playing rugby union in Canberra after his stint at the Queanbeyan Blues the last couple of years.

His four tries and seven conversions tore the Eagles – who only had 20 per cent possession in the opening 40 minutes – to shreds.

If he continues this form up, he might be knocking on the Brumbies’ door sooner than later.

Canberra’s Tom Rogic is continuing to impress in Scotland with another goal against the Rangers, in Celtic’s 4-0 drubbing against their rivals.

Rogic turned his opponent Ross McCrorie off balance before shooting past Wes Foderingham with a rare use of his right foot.

Fingers crossed, he can continue his good form in the lead up to the World Cup.

The predictable script between Australian and New Zealand Super Rugby sides played out, with the Brumbies flying home with disappointment.

Highlanders beat the Canberra side 43-17 in Dunedin to continue the Brumbies’ poor start to the season.

But the match was closer than the scoreline suggested and it all came down to one key moment.

Highlanders’ Sopoaga was in the sin bin and the Brumbies were pushing for a match equalling try on the Highlanders line.

Playmaker Wharenui Hawera spotted space out wide, but his pass was intercepted by Waisake Naholo, who ran 85 metres to score and break the Brumbies’ hearts.

It was the straw that broke the camel’s back, and the boys in blue, white, and yellow had to watch on as the Kiwi side ran away the match.

2. Lights out at Belconnen Basketball Stadium

Fans and players were excited about the first home matches for the Canberra sides in the SEABL but they were made to wait as a power issue forced the games to be called off.

A stadium electrical issue forced both SEABL matches to be cancelled as the Canberra Gunners and Canberra Capitals Academy were due to face their Ballarat opponents on Saturday night (14 April).

Hopefully, the abandoned matches can be rescheduled, otherwise, Canberra and Ballarat miss out on the opportunity for the points.

Officials will hope to avoid another lighting issue when the Gunners and the Capitals Academy host the Geelong Supercats at Belconnen Basketball Stadium next Saturday (April 21).

It is our choices that show what we truly are, far more than our abilities. It’s been a privilege representing Australia at a home Commonwealth Games, today’s wasn’t our day – a DQ, a fall but regardless we are a team #GreaterTogether ?? #thankyou #GC2018 pic.twitter.com/CIJZ515Nv5

Canberra’s Melissa Breen stumbled and fell at the final baton change in a distressing end to her Commonwealth Games after the Australian relay team did not finish the race on Saturday.

Competing in the 4×100 metre relay, Breen stumbled and collapsed on the track on the home stretch, costing Australia any chance of catching the leaders.

It was heartbreaking, but as it turned out, Australia would have been disqualified anyway after the first leg runner Brianna Beahan was found to have stepped out of her lane.

No one wants to see a person’s dreams shattered by injury especially after all the hard yards Breen went through just to make the Games.

What did you dislike or like about this weekend’s sports? Let us know below.

Thanks for the plug The RiotACT, planning on keeping the run going!! #TuggiesDestiny