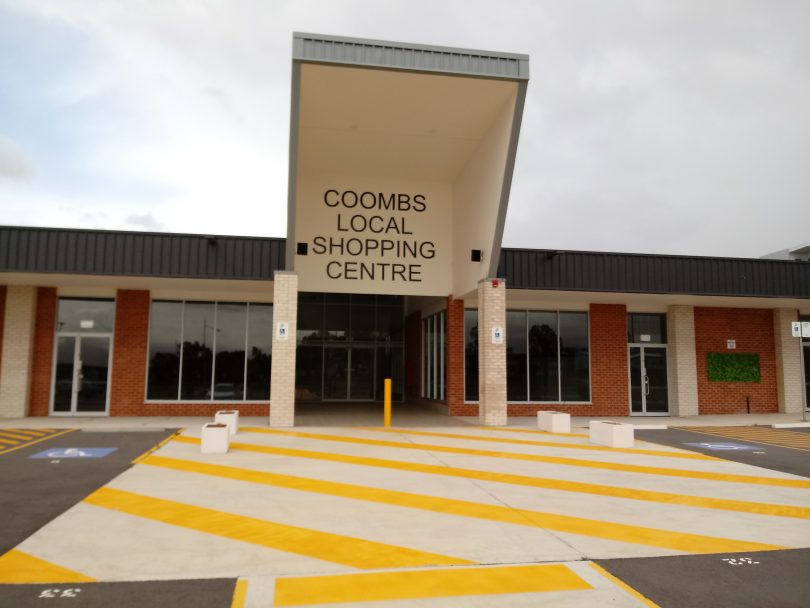 The Coombs shops have only one tenant, two years after it was completed. Photo: File.

The saga of the Coombs shops has taken another twist with the site listed for sale, but many in the community feel it may be a lemon and the only option is for the government to buy it back.

Developer and owner Renato Cervo bought the site in 2015, a development application was approved in late 2016 and he completed the centre in 2018 but has only managed to attract one tenant, an Asian convenience store, and not the anchor supermarket it needs.

Repeated community appeals to the government to do something about the situation have been in vain with Planning Minister Mick Gentleman saying that under the terms of the lease his hands are tied.

The issue was integral to the Legislative Assembly calling for an independent review into development in the Molonglo Valley.

Mr Gentleman said in a statement today that the situation was a poor outcome for the community.

”The Government is exploring all options, including a recommendation in an independent report to buy back the shops,” he said.

Weston Creek Community Council chair Tom Anderson, who has been lobbying for action on the matter for at least two years, said this would be welcome, although many in the community would also like to see it demolished.

”We’d love [the government] to buy the shops, get them filled, and provide the services the people need,” he said.

He said some people had lived in the area for eight years without any shops or services.

A possible impediment to a sale could be the limited size of the supermarket site at only 1000 square metres, the result of what many called a failed government policy.

The other deterrent could be the approval of the Koko Molonglo development in nearby Wright, which will have a 1500 square metre supermarket and is due for completion in late 2022 or early 2023.

Mr Anderson said the size would not interest any of the bigger supermarket players but could suit an IGA.

Molonglo community activist Ryan Hemsley says the Coombs centre could go the way of the Giralang shops – ”a dead abandoned site stuck in planning hell for years and years”.

But with Koko some way off there was an opportunity for a new owner to open a supermarket at Coombs and get a jump on a likely competitor.

”If they do manage to find a buyer that would be absolutely fantastic,” he said. ”We’re all desperate for a development there of some description.”

Mr Hemsley said it was clear that the current supermarket size restrictions hadn’t worked in the consumers’ favour, and Mr Gentleman had refused to take responsibility for placing a 1000 square metre site in Coombs surrounded by sites 500 square metres bigger.

He said the developer had not shown an ability to deliver a vibrant community centre.

”There are plenty of people living nearby, plenty of demand. It’s hard to see how a local centre couldn’t have taken shape,” he said.

Mr Anderson said the difference between the Suburban Land Agency-driven suburbs of Wright and Coombs with the privately developed Denman Prospect – with its shops, cafe and supermarket – was stark.

In a letter to Mr Anderson, Mr Gentleman acknowledges mistakes have been made in Coombs, saying he has asked officials to investigate potential changes that would prevent a similar situation from occurring in the future, or that may allow the Government to take action as appropriate.

He says the situation has prompted the government to review its processes for selling commercial land and several changes have been introduced to ensure the purchaser is able to deliver developments appropriate for commercial tenants.

The lack of services in Coombs and Wright has had implications for the nearby Weston Group Centre where parking and services are under pressure from Molonglo residents.

It appears the Coombs centre was listed back in March and few have noticed. It is for sale by negotiation. There is speculation the owner is asking $12 million.

Why should the govt step in just because a developer stuffs up???

Bad outcome for a government which is very fond of talking about “active transport” and reduced (private) car usage.

I’m reliably informed that this is not the first time Cervo has done this sort of thing. Maybe more money than sense.

The approval of Koko was probably the final nail in the coffin for the Coombs shops.

The chances of getting a major tenant for the Coombs shops must be close to zero. Who would invest in a small 1,000 square metre suburban supermarket when there will be one that is 50% larger diagonally across the intersection?

It still makes no sense that a supermarket in a dedicated shopping center is limited to 1,000 square meters while one on a mixed use block across the intersection is allowed to be 50% larger. The refusal of Mr Gentleman to take responsibility for this fundamental failure in planning is very disappointing and speaks volumes about his integrity. The refusal of representatives of our planning body to understand (or perhaps an unwillingness to admit) that this was a mistake casts doubts on their competency.

However the owner of the Coombs shops appears to have displayed behaviour that significantly contributed to his failure to attract tenants.

It is extremely important that he not be allowed to benefit from this by getting it rezoned for housing (something Mr Gentleman has promised will not happen).

It is very unclear what the future for the Coombs shops is, but based on the performance to date of the major players, the only thing that seems likely is that the community will continue to lose.

So glad we got out of Molonglo. It’s just not Canberra. Now living in Fadden where our kids can ride from our front yard to over 20km of bike paths without crossing a single road because it and the surrounding suburbs have been built for people who want to LIVE in the suburbs.

Well he must know something about something. He has just about the only bit of hard surface that doesn’t have burn out marks all over the place out that way.

Let’s hope that the buyer is community minded and can build a vibrant centre that attracts people and activity.

Don’t buy it back, ACT Government, take it back. No payment. Sell it to somebody who will use it to benefit the community

So is the asking price realistic or has he got a high price in the hope that someone buys, or he can say he has tried to sell, to relieve some pressure off him?

Might be a prime site for Police and emergency services 🤞🏼

What a complete flop, the owner is too greedy and many potential businesses have not moved in because he wants too much for rent. I don’t know how he hasn’t become bankrupt over theses so called shops.

Alan Rose more than likely he’s writing his losses off on his tax!