Experts in buying, selling & renting
Your property, your future
24 January 2019

'Living funeral' held in Tilba for member of stolen generation 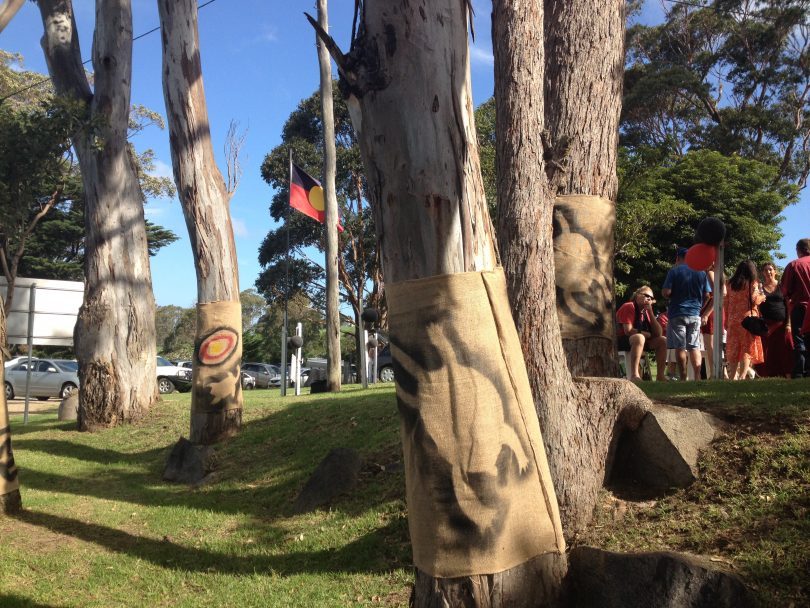 The lawn in front of Apma Indigenous Gallery in Tilba is covered with people wearing red – red dresses, red shirts, even a woolly red and black footy scarf, despite the warm day.

Red is worn by over a hundred revellers to honour and celebrate the “life, times and escapades” of Glen Atkinson, who has terminal liver cancer, as part of a living funeral organised by his wife of two years, Merryn Apma.

The day is clearly a celebration, but it has another purpose – NITV is here, filming and a photojournalist clicks away.

Atkinson, a Yorta Yorta man, was stolen from his parents when he was 18 months old and sent to a Ballarat orphanage. As an adult, Atkinson has not stopped protesting and educating white people about the trauma that resulted from being taken from his family and culture.

Atkinson has recently filed a compensation claim, in which he has requested the maximum of $150,000.

“It’s not likely I’ll see it,” Atkinson says quietly. “First they have to establish that the orphanage is part of the claim, there are always excuses.” 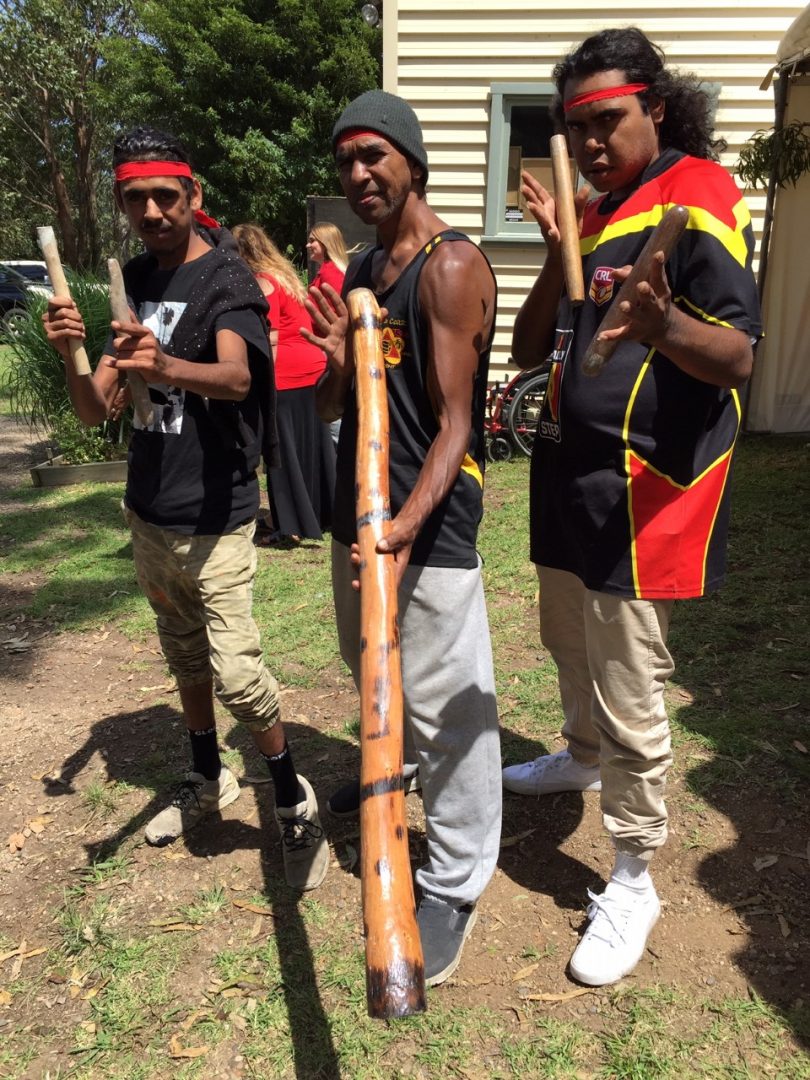 As Atkinson files into the packed shed on Apma’s arm, frail but upright, he is greeted by friends, family, and performers including the legendary Archie Roach, who sings ‘They Took the Children Away’ during the hour-long ceremony on January 20.

“Glen and I have had similar journeys,” says Roach, who was stolen when he was three. “We’ve come through some fire. We could be bitter men, angry men, and violent men because of what we’ve been through … but both of us are better than that.”

Atkinson says that being at his own celebration of life is humbling.

Nobody is pretending that the reverence and emotion hanging in the air is only because of the knowledge of Atkinson’s imminent passing – there are many stolen children in the packed shed, most now in their fifties and sixties, including Glen’s wife Merryn and her sisters. Everyone, black and white, is affected by the facts of our country’s cruel, racist history.

The way Atkinson has faced racism, hatred, abuse and isolation with love is a theme that runs through the words of his friends and family.

Retired police officer June Hopley has come from Bendigo to speak to Glen and share a snapshot of Atkinson’s life.

“It was about 40 years ago,” Hopley tells the crowd, “in the early hours of the morning and I was excited because I’d been called to a car chase. I didn’t know it then, but Glen, who was 14 at the time, was driving the stolen car.

“He was a very capable driver! It was a full-on chase that ended with Glen crashing into a pole and us pursuing him on foot.” 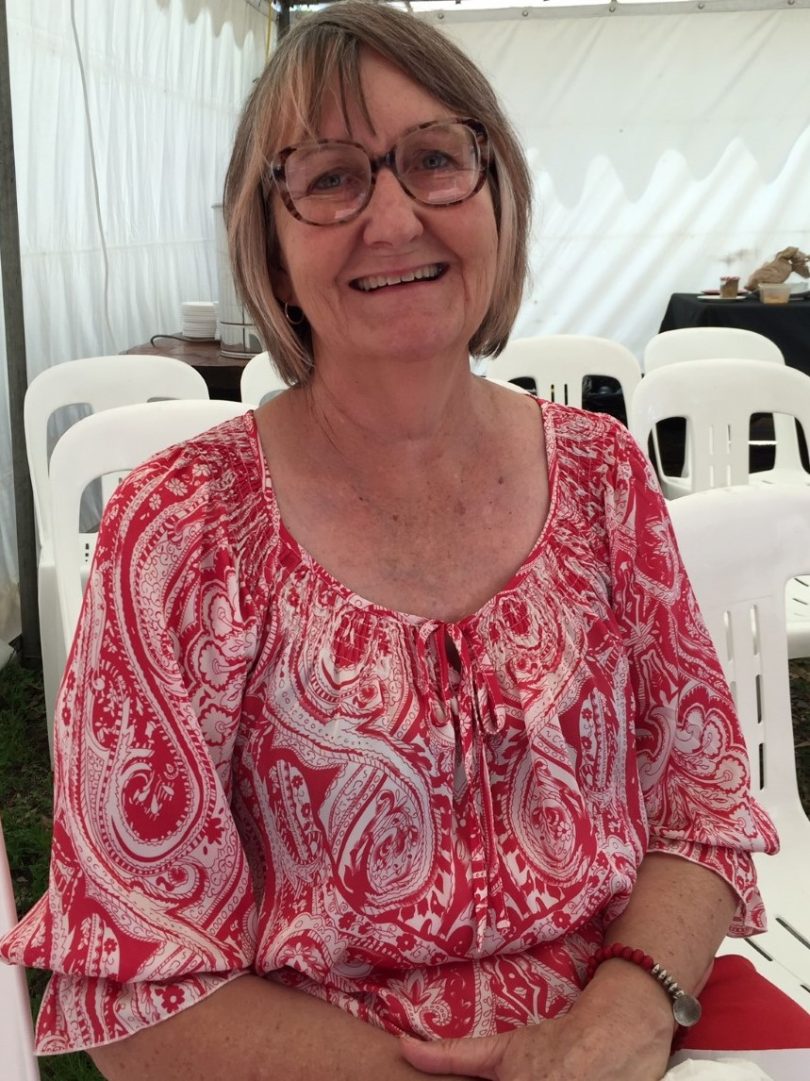 Retired Victorian police officer June Hopley had a chance encounter with Glen Atkinson which she says “has never left me.” Picture: Lisa Herbert.

“When we finally arrested him, I saw this kid with facial injuries, all alone, a ward of the state,” Hopley says as her face crumples at the thought.

Hopley’s chance encounter with Atkinson changed the way she thought about black and white, and crime and justice. She says that Atkinson has continued to open her eyes over the years to the injustices Indigenous Australians face.

“I saw Glen in a court appearance and he said something to the effect of – you’ve taken our land and said sorry and now I’m going to say sorry too but I can’t just walk out, I’ll go to prison for my crime,” Hopley says.

Atkinson says wryly that he thinks he has survived because he “let it all out when I was a kid.”

“I copped it pretty good,” he says. “Physical and sexual abuse. I was pretty wild after that.” 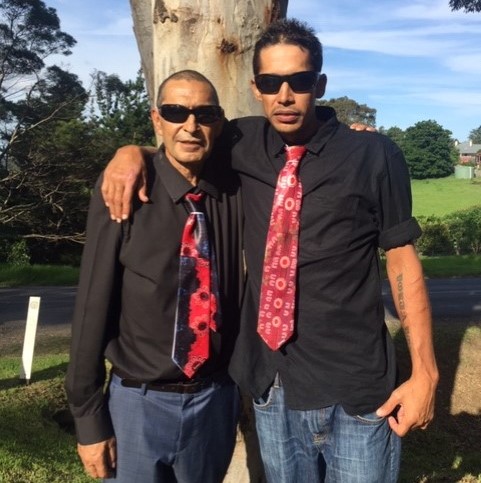 Atkinson’s son Dale, 31, has been doing research about transgenerational trauma. Dale was separated from his dad at the age of five when his parents split up and he moved with his mum to the Northern Territory.

Although Dale experienced trauma and abuse himself in the community, he says he feels like he “comes from a different planet” from his Dad.

“He grew up in an orphanage and I grew up in community, where people are still black, they still own their land,” Dale says. “I didn’t find my dad again until I was 23. Some people say – move on but I can’t. I can’t block it out.”

After a long stay in jail in his twenties, Dale says he was thinking about the past when he got into trouble.

“On the community, you break the lore and you pay it back, “Dale says. “I don’t want to hurt people, but I want payback. It’s a transference of energy, like a boomerang.”

I tell Dale I’m sorry for everything that has hurt his family.

“You don’t have to be sorry,” he says, and in the loving spirit of his father. He pulls me in for a hug, it makes me think.

And their taxes were paying to house Glen far away from the people who loved him.

In that sense, it was a transference of energy.

Lovely story. We still have a lot to learn about our history and it’s time we did!

agreed Cheryl Gay any time we travel round this land of ours we’re reminded of our history and of the lack of insight of so many of our people.