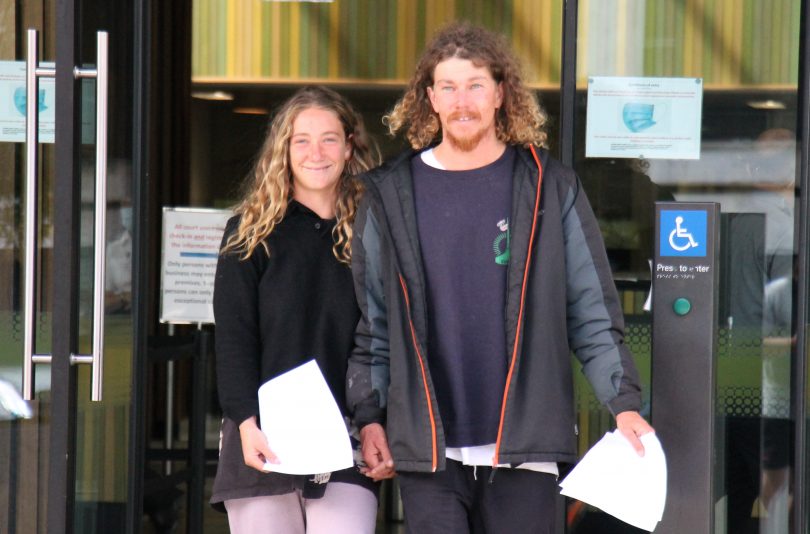 Protesters Ilaina Crabb and Kane O’Brien were both released on bail on Wednesday. Photo: Albert McKnight.

A protester and self-described “living man” arrested near Parliament House this week is accused of attacking a police officer with a bongo drum.

On Wednesday (30 March), the ACT Magistrates Court heard police had been near Parliament House on Tuesday night (29 March). They say they saw protesters who appeared to be drinking, playing music, occasionally being aggressive and shouting over a microphone.

Police repeatedly told protesters to leave the area, but during the evening, 28-year-old Kane O’Brien allegedly became abusive and hit an officer on the arm with a small bongo, making her stumble.

The allegations were read out to the courtroom, resulting in an outburst from Mr O’Brien when the accusation regarding the bongo was raised.

“This is the biggest f-ing load of bull-t that I’ve ever heard,” he said.

Earlier, when asked to confirm his name, he said: “I’m a living man, Kane O’Brien.”

“This is an obvious attempt to stop political protests.”

Magistrate Glenn Theakston granted bail, with the condition he keeps the court updated of his contact details, and adjourned the matter to 5 April.

READ ALSO Protest against COVID-19 restrictions returns, but what do they want now?

Mr O’Brien said he would provide some contact details, but previously appeared to resist a proposal to tell the court where he was living.

“I have no address. It’s none of your business where I’m living,” he said.

“We’re fighting this fight because of how corrupt this is.”

A second person, Ilaina Crabb, was also arrested at the protest. She told the court she had been visiting Canberra and planned to leave.

Magistrate Theakston also granted her bail and adjourned her case to 4 April.

ACT Policing said they had been called to a crowd of intoxicated protestors at Federation Mall at about 9 pm on Tuesday.

A third person was also taken into custody following the arrest of Mr O’Brien and Ms Crabb but was released after entering into an undertaking to keep the peace.

Police said a fourth person was arrested and later released without charge.