The following media release has come into us, apparently they’re well sorted for entries in general but would really like to get more Canberra made material in: 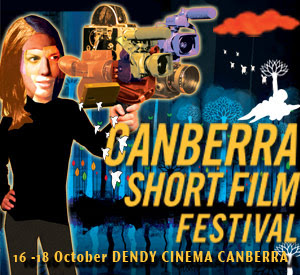 The Canberra Short Film Festival, with new festival manager SilverSun Pictures, is on again this year, with all screenings now at Dendy cinemas, from Thursday 16th October to Saturday 18th October, with tickets now available for purchase from Dendy.

Entries from all over Australia, and some from as far as Poland, have been pouring in since the festival competition opened for entries two weeks ago, including the recently much-talked about ‘White Noise’, a drama about life as a deaf person.

The prize categories (and prize sponsors) these years are;

Entries close Tuesday 30th September 2008, and all filmmakers are encouraged to enter.

Workshops and seminars are also being run during the 4-day event, on Saturday 18th and Sunday 19th October.

The current confirmed guests hosting the workshops and seminars are;

With more on the way, including ‘3D animation’, ‘Storytelling & filmic style in Videogames’, ‘Visual FX’, and ‘Digital HD cameras vs Film – which is better?’

Check out the website for more details at www.silversunpictures.com.au/csff, or www.canberra.edu.au/csff

And make sure to watch out for the Canberra Short Film Festival Girl around town, in the coming weeks! 😉

Greg Freeman - 7 minutes ago
Canberra always has had the worst drivers View
Liam O'Toole - 12 minutes ago
ACT Policing is probably the laziest police force in Australia. You never see them in the territory but as soon as people cro... View
Carn Ruglrass - 18 minutes ago
As a cyclist, motorcyclist and motorist, all I can say is. Canberrans - you suck View
News 15

DrLin - 18 minutes ago
Foresight serves you well, I received notice yesterday of a 12% increase to the price yesterday. View
Property 17

Carlie O'Shea - 43 minutes ago
Kristy Keft is this your pub you rave on about? 😂 buy it View
Ben Lindsay - 1 hour ago
Neil Willis could almost walk to work from your joint View
Peter Taylor - 2 hours ago
Amanda Sanderson. Short commute. Walk to work, but getting home would be a struggle. View
Property 12

John Moulis - 51 minutes ago
They must have a lot of pull. Even people on Sydney's upper North Shore who want to remove trees which are blocking the view... View
Pam Dovey - 56 minutes ago
Margaret Hunt did you see this? View
Run_W - 2 hours ago
Wasn't this the Club that was complaining last month about being broke and if someone put planes on the lake it would mean th... View
News 7

Lewis P Owlay - 3 hours ago
I believe you mean the Delta Myna View
Lyndsey Simcoe - 3 hours ago
Graham Hatch see! They are psychos! View
Acton - 11 hours ago
Pigeons, those flying rats, are also pests. Growing problem with them nesting and crapping under solar panels.... View
News 12

Ben Johnston - 10 hours ago
"In a 50-minute ministerial statement this morning (22 June), Business Minister Tara Cheyne told the Legislative Assembly tha... View
summs - 12 hours ago
At least 15% of the budget went to 19 (2%) businesses whilst 23% of the businesses received less than $50? Was the scheme int... View
Lewis P Owlay - 13 hours ago
Worked a treat View
News 8

Sitting on a bunk bed in Australia's first sleepbus for women - before a single homeless woman, her children and maybe...
Opinion 52

@The_RiotACT @The_RiotACT
If you use your phone and drive you will get caught, Transport Minister Chris Steel said after new laws allowing mobile detection cameras in the ACT passed the Legislative Assembly this week https://t.co/zYUIF8PzLk (32 minutes ago)