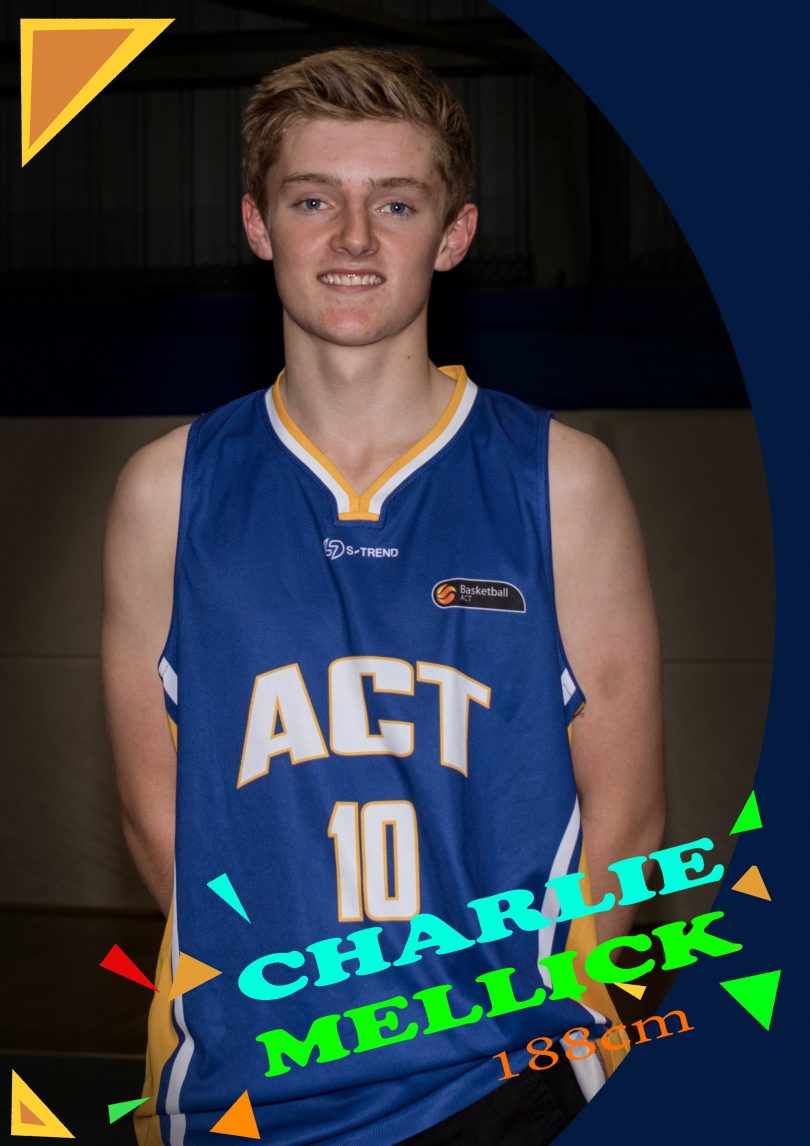 It was a tough campaign for the ACT Under-16 boys representative side at the 2017 Australian Junior Championships in Western Australia, but Canberra junior, Charlie Mellick made the most of it.

Mellick has been one of the form players in Canberra’s Under-16’s competition this season and his personal performances have reflected his high caliber potential.

“Charlie brings athleticism and versatility to the ACT U16 Men’s Team,” said Basketball ACT Head of High Performance, Phil Brown. “He can play as a post type or as perimeter player as he has the capabilities to defend on the interior and perimeter.”

“He is an accomplished rebounder, both offensively and defensively, and his ability to run the floor, get to the basket or shoot the three-point shot make him a challenging match up for opponents.”

Mellick’s successes have always come off the back of hard work, as the youngster works tirelessly on his ball skills and three-point shooting, while looking up to elite local players for inspiration.

“I definitely look up to Patty Mills and what he has achieved, but someone I see a lot is Daniel Joyce,” said Mellick of the Canberra Gunners’ starting point guard.

The athletic forward has now set his sights on the Basketball Australia Centre of Excellence at the Australian Institute of Sport, with ambitions of playing in the American college basketball system in years to come.

“I think experiencing different competitions will be great for my development,” says Mellick, as he prepares to make the jump next season to Under-19’s in Canberra’s local competition.

purplevh - 1 hour ago
Ancap has anomalies. For example they rate a 2003 Falcon the same as a 2003 Fairlane. Falcon has two airbags, seatbelt pre te... View
TimboinOz - 6 hours ago
Thanks - our 2015 Forester gets a tick! BSEGrin!... View
Lifestyle 4

Peter Graves - 3 hours ago
One significant fact and feature was omitted in this article and was only apparent by a careful reading of the sign in the to... View
Nick Swain - 4 hours ago
The location of the Mt Ainslie tradesmen's camp is a little unclear. Corner of Ebden and Chisholm Sts could be where the ACTE... View
TimboinOz - 7 hours ago
Hi Marg, Honour and Michael were close friends of my Mum and Dad from just after WWII onward. They were among my retreat opti... View
Lifestyle 2

Frank Spencer - 4 hours ago
It will be interesting. With limited medical facilities down there, how will they cope if large numbers get covid? View
Stephen Saunders - 11 hours ago
In the sleepy coastal hamlet where we go, there's about one mediocre place for sale, and it's > $750,000. It's a worry. Plus... View
Lifestyle 1

MERC600 - 4 hours ago
A peregrine is indeed a rare find. Best 'exotic' I can manage is a kingfisher which likes to sit in a nectarine tree from tim... View
News 10

Futureproof - 8 hours ago
chewy14 - I'm a boomer, still working. When I retire, I'm going to hit up the government to get as much free stuff as I can.... View
Capital Retro - 11 hours ago
I referred specifically to that demographic who were self-funded. I suppose it doesn't matter anyhow because you hate them al... View
Mataina Rozowsky - 1 day ago
Of course they're rising .... Canberra's are on the move again View
Community 1

Lucy Green - 14 hours ago
I have lived in the area for a long time. These birds are definitely breeding and spreading. What started as the Narrabundah... View
David Worboys - 23 hours ago
As new comers to the suburb it was great to see these birds at first. But after seeing the number of near misses with car acc... View
News 5

Rade Kosa - 24 hours ago
Marc Edwards how many boosters will it take to just admit it’s not working. Anyway good luck guys. View
Marc Edwards - 1 day ago
Rade Kosa you obviously don’t understand the paradox of vaccination, because if you did you would realize even that graph s... View
show more show less
*Results are based on activity within last 7 days

An arsonist who set fire to her Housing ACT home causing hundreds of thousands of dollars in damage is again...
Lifestyle 2

@the_riotact @The_RiotACT
From a dog's #gas mask to a journo's microphone from #Afghanistan, the @AWMemorial's expanded digital 3D #exhibition allows viewers to experience history at home like never before https://t.co/qyAuRvkLVp (38 minutes ago)